The End of the Big Bop

It's likely many of the people who'll lament the passing of The Big Bop - the Queen and Bathurst club that was Toronto's home to metal, hardcore and other music with a notable underage following - are the sorts of people whose opinion isn't usually sought. Many of them can't vote, don't buy much, and certainly won't be among the clientele for the new tenants rumoured to be taking over the space - an American home furnishings chain that specializes in the loft market.

With the passing of the Bop and its three stages - Kathedral, the Reverb and Holy Joe's, in descending order of size - one of the last obstacles to the gentrification of the intersection, long considered a tough nut for developers, will disappear, but due to the club's customers and reputation, the reaction has been surprisingly muted. Dominic Tassielli was the owner of the Big Bop until three years ago, and the manager since then, on a lease renewed monthly, and during his decade and a half running the place, he saw it host everything from grizzled punk veterans like the Dayglo Abortions and the Cro-Mags to the nascent versions of bands like Billy Talent, Alexisonfire and At The Drive In. 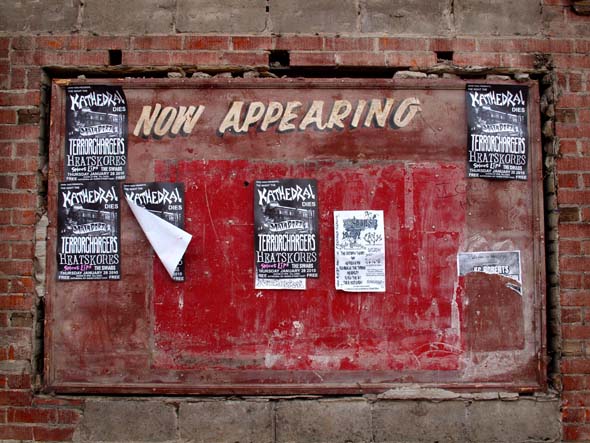 Looking back, Tassielli says that there's no particular show that he remembers as fondly as the response he's gotten from a core group of customers he didn't know existed. "For the last two months that we were closing, I've been getting so many kids coming up to me and thanking me for the last 10, 12, 14 years that I've given them a venue where they could come and have fun. There aren't that many all-ages clubs, and I never thought we had a regular clientele, that we had a live venue and people just came for shows, but there were kids who came here maybe 30 times a year."

"It didn't matter what show - coming here and just having a good time. And I think seeing a lot of these bands that have made it - 14 years ago they might not have had a stage to play on, and who knows if they would have kept up with the music. Now they've moved on to bigger and better things, and who knows if they stuck to music because they played here maybe five or ten times a year." 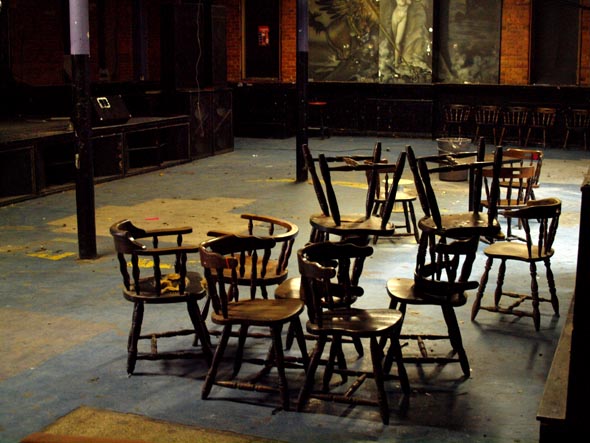 Whoever the new owners are - and the leading rumour favours CB2, Crate & Barrel's "urban" subsidiary - they won't be starting from scratch with a new building. The building that's housed the Big Bop since the mid-80s is heritage landmarked, though it's hard to tell from its scabby, purple-painted exterior or the scuzzy, well-worn space inside.

It was the mid-80s when the Ballinger brothers, Lon, Stephen and Douglas, took over the Holiday Tavern, a down-at-heels nightclub whose scuffed retro decor had gone from stage shows featuring jazz and R&B acts to mid-day drinkers and end-of-career strippers, and a final gasp of life booking new wave acts like Gene Loves Jezebel and a weekend residency with the Shuffle Demons.

They gave it the winsome name it sported until this weekend, and a garish makeover that splashed new wave graphics in neon colours all over the the old tavern, which Tassielli painted over in the mid-90s with the assertive purple hue for which its underage clientele would know it. It was a dance club under the Ballingers' management, but turned to live music after they left for New York to make their reputation with premiere event space Webster Hall. 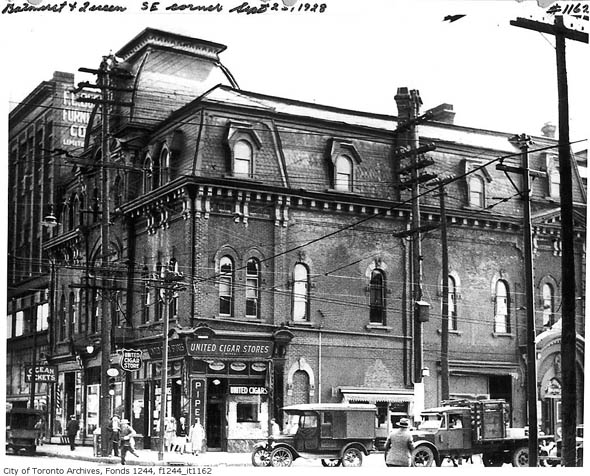 Before all of that, however, it was a Masonic lodge whose false domed ceiling can just be glimpsed over Reverb's dance floor. Called the Occidental Hall, it lost its top two stories and a magnificent mansard roof in 1948 when the Holiday was opened, decapitating a roofline that met its looming neighbour to the east, the recently redeveloped Burroughes Building. In an article in NOW magazine, Toronto architectural historian Alec Keefer called it a "desecration," and one that was only magnified by the massive 2008 fire that leveled most of the wood-framed block of buildings further to the east. 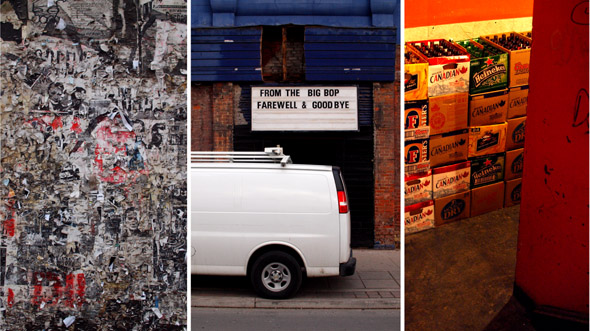 Tassielli says that the landlord is committed to putting $3 million into a renovation of the building, which will make it "quite the landmark," and workmen currently gutting the basement say that they'll start work on the rest of the place on Sunday, just hours after the last band plays its last note.