The Anvil Experience Puts the Pedal to the Metal

The Anvil Experience was way overdue in Toronto.

"I'm having the fuckin' time of my life!" exclaimed a jubilant Steve "Lips" Kudlow, clearly astonished to be on stage in front of a packed Phoenix Concert Theatre on a Friday night.

I felt a little out of place among the diehard Anvil fans (Anvillains?) up front: big, long-haired guys wearing jean jackets adorned with patches of other heavy metal bands such as Slayer, Metallica, AC/DC and Black Sabbath.

As chronicled in the recent documentary Anvil! The Story of Anvil!, the band had more than its share of ups and downs. Due to the resilience of the heavy metal band, now touring their 13th album, This Is Thirteen -- and DVD release of the doc -- they're back with a vengeance.

Just before the show started, I found myself surrounded by a throng of beer swilling men, becoming more and more vocal. "Anvil! Anvil! Anvil!" they started to shout, about 10 minutes before the band hit the stage at 9:15 p.m. 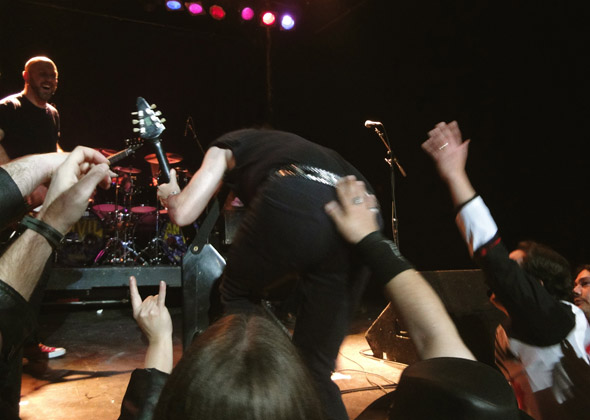 When the curtain finally opened, the crowd went wild, as Kudlow marched to the front and centre and kept going, bringing his guitar with him right into the audience up front about 10 feet in, and started wailing on his guitar.

The air of testosterone was thick. The Anvillains threw up the devil's horns often and they meant it. There was a lot of "fuck yeah!" and plenty of spilled beer. 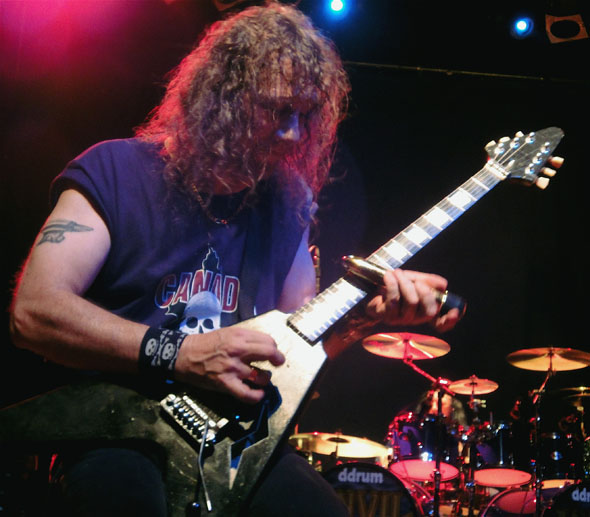 Towards the latter half of the 75-minute-plus show, we were treated to White Rhino, a song that, as Kudrow explained, "will show what (drummer) Robb (Reiner) can do back there. With two kick drums and a furious pace, we were treated to a drum solo that would give Animal from The Muppet Show a real challenge:

And who could forget the story about the band's old friend "Mad Dog," who happened to be in the audience. He was invited up on stage to show off his unique skill of drinking a beer through his nose:

Anvil finished off their set with the popular Metal on Metal before returning to chants of "Anvil! Anvil!" once again:

They came back to finish with a song about their old bassist. As the story goes, he was going at it with a really vocal girl a hotel room in Ottawa, many years ago. "I was asked to join in," recalls Kudrow. "But I wasn't gonna have any sloppy seconds." But he wrote a song about it, called Jack Hammer.

Is it any wonder that most of the Anvillains were guys?

Photos and videos by Roger Cullman.