Tegan and Sara at Massey Hall

Tegan and Sara were clearly giddy to be on stage at Massey Hall for the very first time, as were their fans.

"Thanks for letting us kick off the show with some new stuff," greeted Sara Quin, one half of the identical twin duo, a few songs into their set. "Only the best for Massey Hall." 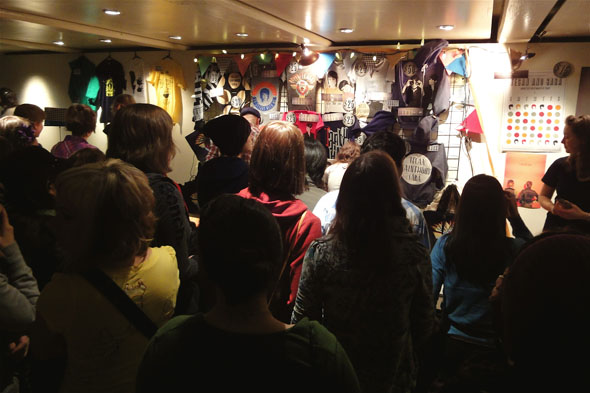 Before their two-hour show, which included many asides and stories told by mostly Tegan, there was much abuzz at the merch table downstairs. A lineup five deep continued beyond the velvet-roped stanchions and trailed up the stairs was seldom seen in the venue.

Some of the excitement was over five-dollar posters, the proceeds of which will go to Doctor's Without Borders to help Haiti's earthquake disaster relief efforts. 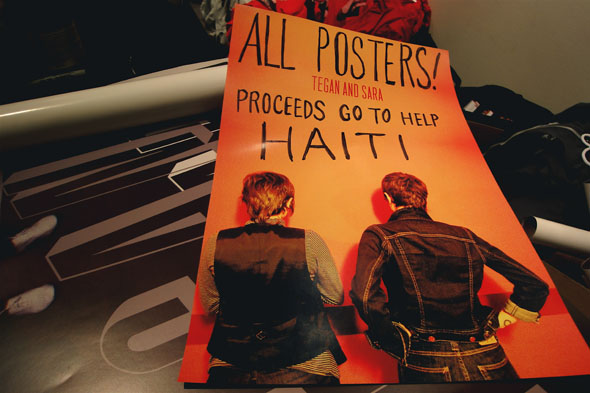 Tegan joked with her sister after the song as Sara had to tune her guitar after "blowing her load" too quickly, creating a false start with the opening strums of Walking With a Ghost from 2004's So Jealous album.

It didn't take long before hordes of fans decided to rush down the aisles and crowd in front of the stage, eager to get a closer look at their musical heroines. Maybe one fan got a little pissed off that her view was being obstructed. Maybe it was a grudge over the last Sainthood hoodie. Or perhaps these fans have learned how not to put up with annoying fans who sing along too loud at shows. But several songs in, I took a break and headed down to the restroom, only to notice a young woman in the foyer with a bloodied nose, complaining that a drunk girl had "skulled" (head-butted) her.

Back In Your Head, indeed.

Three patrons had already been escorted out of the show, according to one usher. "It's usually the country and blues acts that get rowdy." I guess not all the younger fans had their parents chaperoning them.

"I'm having a really nice time up here," said Sara, taking some time in between songs to let us know just how she felt. "This is going to sound cheesy -- and I'm on my period right now -- but it's great to play in front of all my friends from high school. I'm just so glad to be having that moment with you."

Tegan likened her sister's diatribe to the speeches given at the recent Golden Globe Awards, where they only get a few seconds before they yank the microphone. But she said she'd be happy to let her go on and on ad nauseam, and the audience didn't seem to mind.

My favourite storytelling moment was when Tegan retold a story about Sara's first date with a boy named Robbie when she was eight years old. Meanwhile, Tegan was "dating" a boy named Scott, who looked a lot like Robbie. "People could hardly tell us apart," said Tegan. "Being a teenager is hard. But being eight and a lesbian is really hard." 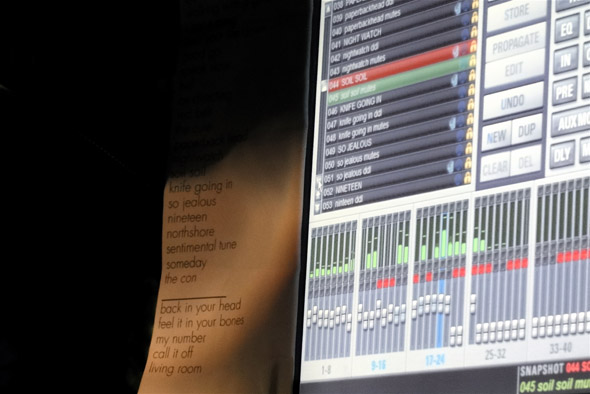 Tegan and Sara gave a five-song encore, including heart-felt dedication of the penultimate song, Call It Off, to another famous pair of Canadian singing sisters, Kate and Anna McGarrigle, in honour of Kate's death the morning before their concert. "There's nobody I'd rather spend touring with than my sister," said Sara.

Tegan and Sara took turns singing lead and harmonies, also playing guitar and keyboards throughout the night. The rest of the band, which included a trio of guitar (Ted Gowans), bass (Shaun Huberts) and drums (Johnny Andrews), pretty much laid back and let the girls carry the show.

The backdrop was a pretty plain, colour-by-numbers sort of design. And the stage lighting, while a tad too bright and in-your-face at times, often added some welcome bursts of colour to the stage. 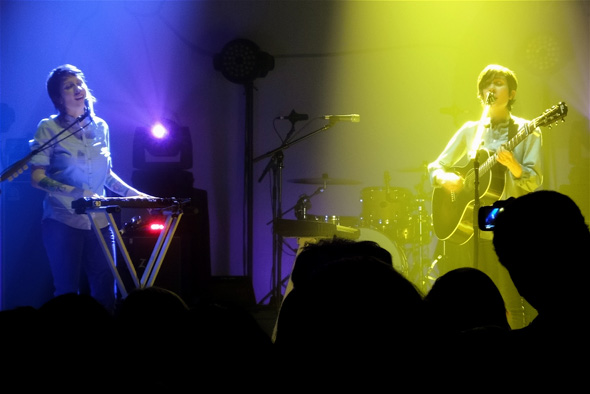 I bet the security was a little more beefed up for Tegan and Sara's second of two nights in Toronto, when they played the Kool Haus last night. They're not quite the Indigo Girls of Generation Y, as I was starting to surmise.