Basia Bulat Fills the Pews and Shines for the People

Basia Bulat created a line up to get in to the Trinity St. Paul's Church on Saturday night, and it snaked around Major Street. A curious onlooker asked a couple in line what all the fuss was about. Bubbling with excitement, they answered "bawsha booLAT!" in unison. The onlooker looked confused. The couple explained, "Basia Bulat...a talented, beautiful musician with a voice of gold."

During my undergrad at the Western, I had caught wind of the unpronounceable, irresistible Basia. A native to London, Ontario, she played tiny bars and galleries across the forest city. I'd heard of her songs here and there over the years, never really giving them a listen until a friend of mine lent me her first self-released EP. It was a whimsical, pretty thing and I liked it enough. 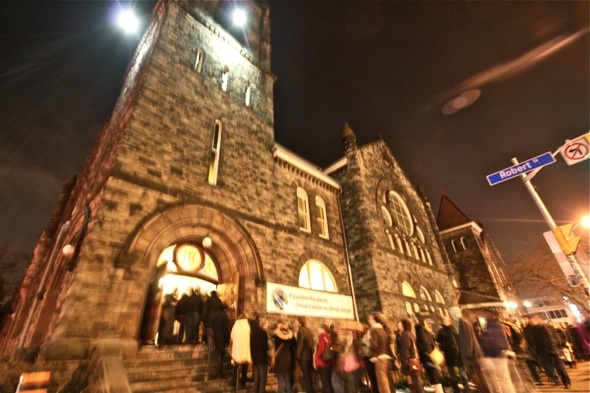 It wasn't until I saw her live, after she signed to 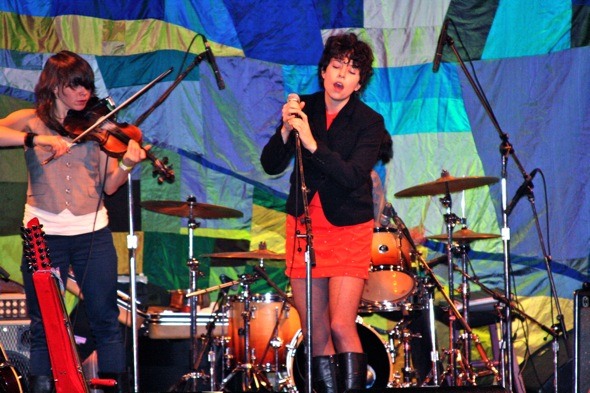 Rough Trade Records and put out Oh, My Darling in April of 2007, that I completely understood.

As Basia began her set, members of the opening band, The Luyas, had gathered outside the doors of the church to listen. One of them told another, "That Basia...she's Incredible. She's...just...Basia...." 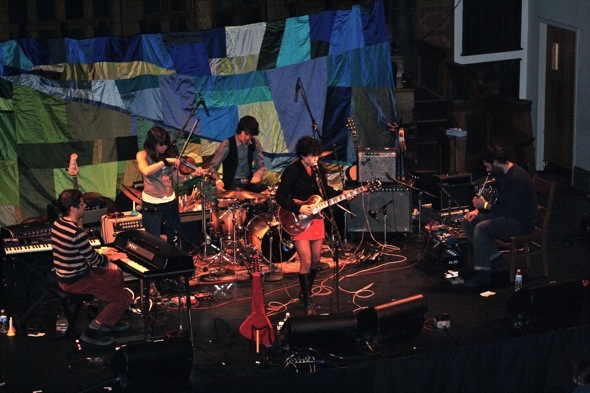 Hailing from Montreal, The Luyas were a bundle of contradictions. Their songs were both delicate and noisy, jangling and melodic, sparse and chaotic. And in the conflictingly conservative venue that was the Trinity St. Paul Church, it worked. Bonus: lead singer Jessie brought out a bizarre looking instrument from Amsterdam called a... wait for it... moodSLAYER.

As Basia walked onstage, a doll-like blonde in a brown as the oak leaves dress, she was all smiles. Between songs, Basia would humbly joke, talk to the audience, and tell stories. She told us how happy she was to be playing Trinity St. Church. Oh, Basia. We were the happy ones. 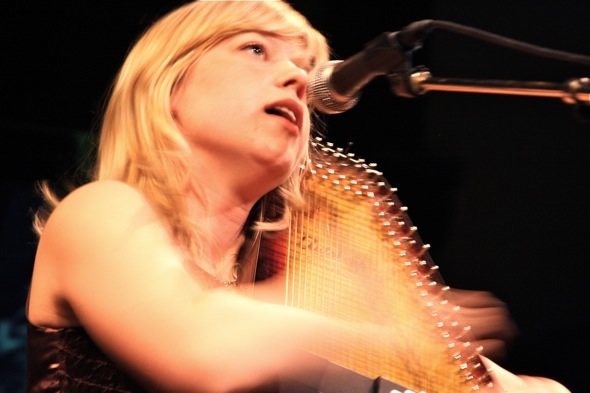 After two or three songs, someone from the audience called out "You're beautiful." I took a break from watching Basia to look at the captivated faces of the men and women around the room -- the sentiment was shared.

Her guitar looked too big for her at first, but as soon as she started playing, it became an extension of herself. Guitar, piano, harp, ukulele... damn, the woman could play. And that voice. It dripped like honey, moving from sweet and angelic to mesmerizing and husky. 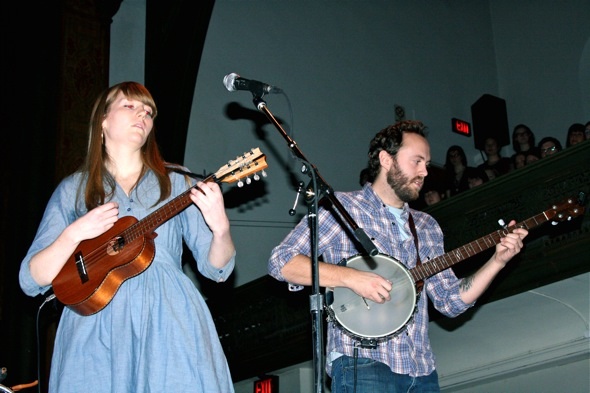 Between classics, like catchy crowd-favourite Into The Night, the swaying Snakes and Ladders and an ethereal take of The Pilgriming Vine, Basia played new tracks off her sophomore album, Heart of My Own. A beautiful, breathless version of Gold Rush and the soaring and uplifting Go On makes me eager to purchase the album as soon as it's out, on January 23 (FYI, you can download the Neil Young-esque Gold Rushon her website).

As the audience clapped along to Before I Knew (yes, that song from the Subaru commercial), someone remarked to me "I've never heard a clap last through the whole song before..." It was a testament to the catchy power that is Basia Bulat. 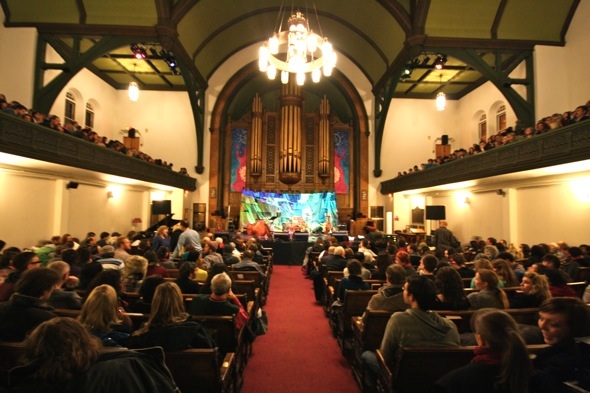 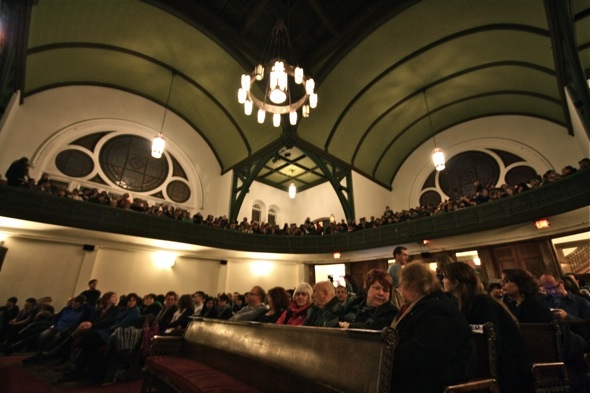 The venue was fitting. A church, with flickering lights, capable of lovely, echoing sounds -- its full potential was recognized during Basia's final song. A lovely and unassumingly powerful acapella song called Hush. Basia told us she used to open her sets with this particular song, but recently decided to end them with it, asking if that was okay with us. And of course it was. It only makes sense to save the best for last. 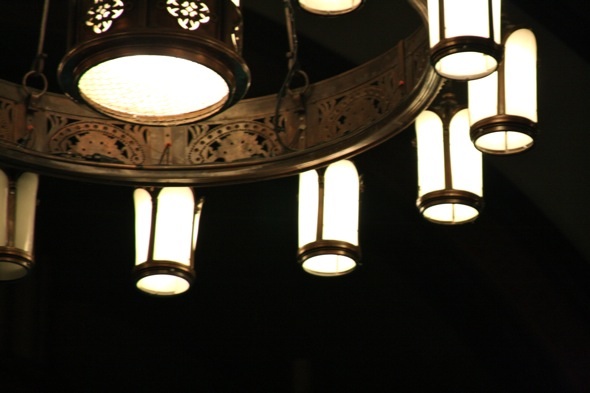 The audience eagerly awaited the chance to soak in the singer alone. Basia, a solitary figure on the empty stage, almost looked a bit nervous before stomping and clapping her way into the song. Minus the microphone and only accompanied by a timely shuffling, she shone.

Not to say her band (among others, her brother Bobby, a propulsive drum player, and Allison Stewart, so impressive on viola) wasn't amazing. They were. But, alone on stage, with just her voice as company - that's where Basia is best. Her beautiful voice, powering through strong melodies, needs minimal accoutrement. Even a microphone is excessive, unable to capture its trembles and delicate nuances. 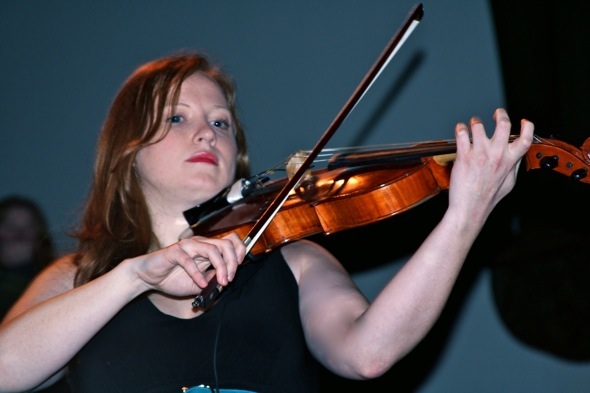 It makes me happy to see how far she's come from her London days. If anyone deserves recognition for her terrific talent, it's Basia. And if this year proves me right, the standing ovation at the end of her set is just the beginning.