While most students are celebrating the end of exams, a select group of Ryerson students have even more reason to rejoice, having just wrapped up the final Third Floor Session of 2009. These concert sessions are an all-in-one media event, offering viewers live webcasts, mixed mp3 packs and HD video content at no cost. Though they only launched in late October, they've already featured a handful of appreciative Toronto musicians.

I attended both December sessions (featuring Ohbijou & The Wooden Sky), where I caught up with the team behind the Third Floor Sessions to discuss the future of their final project and its impact on the local scene and beyond.

The idea was initially conceived in August 2009 when a collection of students striving for their Radio & Television Arts degree began to build upon Spiritlive's process of recording bands live off the floor. Seven students took advantage of countless advances in streaming media, social networking and video and audio recording technology to launch their ambitious and all-encompassing final project.

Fortunately for the contributing bands, the ambition of TFS is fueled by a grassroots approach to independently promoting local musicians and groups rather than an intention to profit. 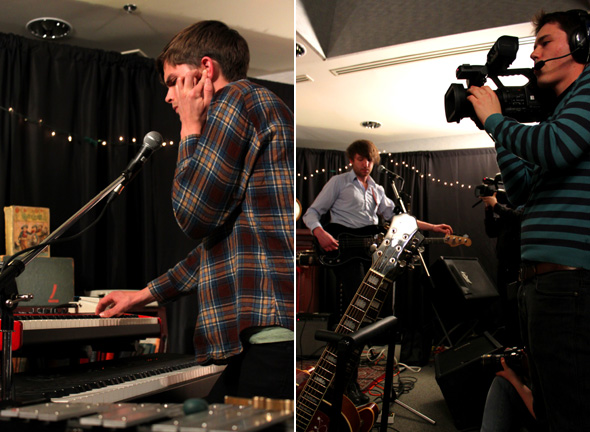 Despite the small size of the live room in which the bands perform, each session features a small guest audience of roughly twenty lucky people. From the Rogers Communications Center at the Ryerson campus, these intimate performances are captured in their entirety on a trio of high-definition cameras and professional audio recording equipment.

While other student projects range in focus from documentaries to short films and television programs, Third Floor Sessions have significantly raised the bar by streaming both video and audio live off the floor to the internet. Following the live webcast, countless hours are spent on post-production to create mixed MP3 packs and full HD videos to stream and download for free. 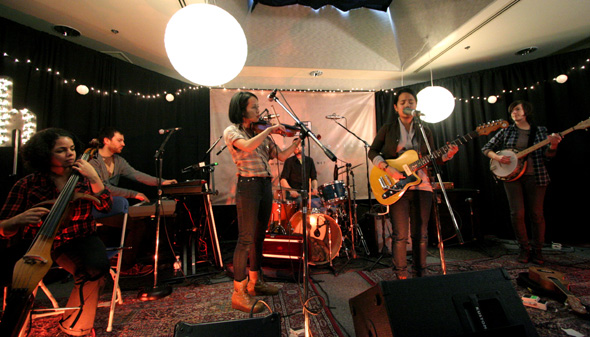 Five sessions deep and the crew already have the process down to a fine art, having successfully hosted Kay Pettigrew, Gravity Wave, DD/MM/YYYY, Ohbijou and The Wooden Sky during their first semester. The majority of the featured performers either studied at or have previous connections with Ryerson and/or Spiritlive, except for experimental art-punkers DD/MM/YYYY who were actively sought out by TFS.

With each session the process is becoming less arduous and the crew increasingly comfortable, affording them the opportunity to further experiment with the technology.

Shortly after The Wooden Sky's set I met with Elissa Matthews, one of seven founding members of Third Floor Sessions. Having received an abundance of positive feedback from viewers, teachers and the musicians involved, Elissa and her team remain focused and determined.

While the deadline for the project is in February, the Third Floor Sessions will continue long after their evaluation. The process of transferring the knowledge to younger students has already begun, with several volunteers hoping to take over the reins for future sessions at Ryerson.

2010 will see the technology and process transferred to an EPK (electronic press kit) for anyone to try. While many would seek to carefully safeguard the creative aspects of the project, TFS regard their work as open-source and seek to share both the process and the product with as many people as possible. First step: offering campus radio stations a behind-the-scenes look at the process, as well as DVD/CD copies of the 2009 sessions in full surround sound for on-air rotation.

In the meantime, Elissa and her dedicated team will continue to slave away over the holidays mixing and editing the 2009 sessions. Thankfully for Toronto's music scene, these sessions will continue to provide both musicians and fans with professional-quality media at absolutely no cost.

VideoFACT music video grants are few and far between for independent Canadian musicians and as Greg Ipp (founder of Unfamiliar Records) noted earlier this year, these grants are typically given to already established artists. The process pioneered by Third Floor Sessions offers smaller bands a potential alternative to applying for these grants by providing the full professional treatment without the arduous application process or mainstream competition.

The DIY work ethic and sense of community surrounding the Third Floor sessions has found a welcome home in the city of Toronto, and by sharing the process with others, Third Floor Sessions will leave a lasting impression even after the original creators have graduated.

Check out Third Floor Sessions on Facebook, Twitter or through Spiritlive and stay tuned for announcements about upcoming 2010 sessions.

Full slideshows from both Ohbijou and The Wooden Sky's sessions below: