Guelph, Ontario's Constantines played the first of a two-night stand at Lee's Palace Friday night. Celebrating their tenth anniversary with a short tour of the province, the Cons called upon long-time friends John K. Samson and Attack in Black to contribute to the festivities.

Hailed as one of the greatest Canadian rock bands of the decade, the Constantines relocated to Toronto in 2001 prior to the release of their eponymous self-titled debut. The album was picked up by Sub Pop and distributed internationally, building upon the already loyal fan-base their raucous live performances had drawn in through years of relentless touring. Now four albums and ten years in, the Cons are as strong as ever and promised fans they'd dust off a few tracks they haven't played in a while during their brief anniversary tour. 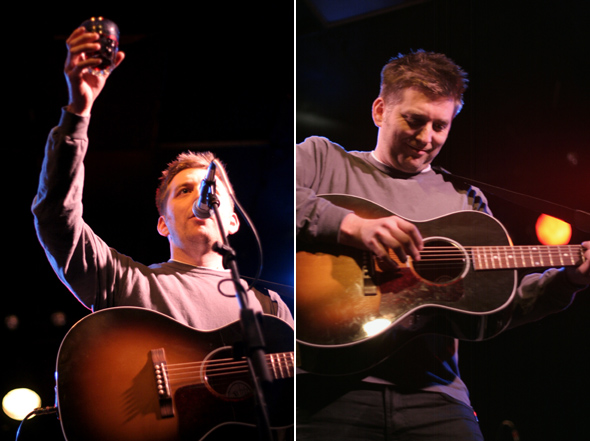 Samson hit the stage shortly before ten o'clock, greeting the crowd with a warm and unassuming smile as he picked up his acoustic guitar. Though Samson has played with the Constantines several times before, he's usually performing with his band the Weakerthans.

November marked the release of his first solo material in over a decade - City Route 85, a three track EP inspired by various streets in his home province of Manitoba.

His thirteen song set had a group sing-a-long feel from start to finish, with the crowd attempting to harmonize to Weakerthans classics like 'One Great City,' 'The Reasons' and 'Left & Leaving.' I was happy to hear him perform some of his newer stuff, including 'Cruise Night' and 'Heart of the Continent.'

Samson held his glass high for an a cappella performance of 'Elegy For Gump Worsley' - a salute to Montreal goaltender Lorne Worsley. After playing 'Plea From a Cat Named Virtute' early in the set, Samson unplugged his guitar and stepped to the front of the stage to close with the second song in the feline tale of misery and neglect with 'Virtute the Cat Explains Her Departure.'

After a brief changeover, Attack in Black hit the stage as calm, cool and collected as ever. The young quartet have been in a constant state of evolution since their formation in 2003, as shown by the stark contrast between their breakthrough LP Marriage and their most recent effort Years. 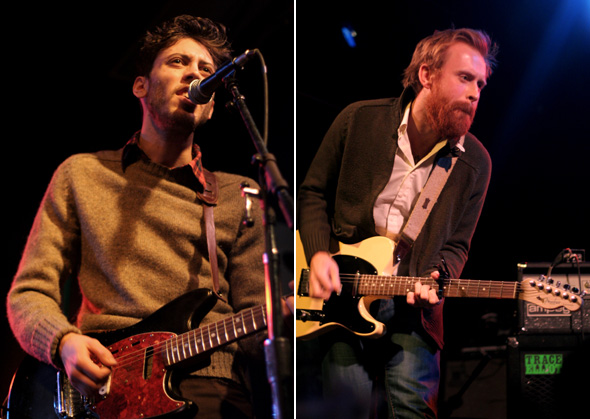 Singer Daniel Romano hailed the Cons as one of the best rock bands in the country, commemorating their anniversary with a quote from Kids in the Hall: "life is short, life is shit, and soon it'll be over." 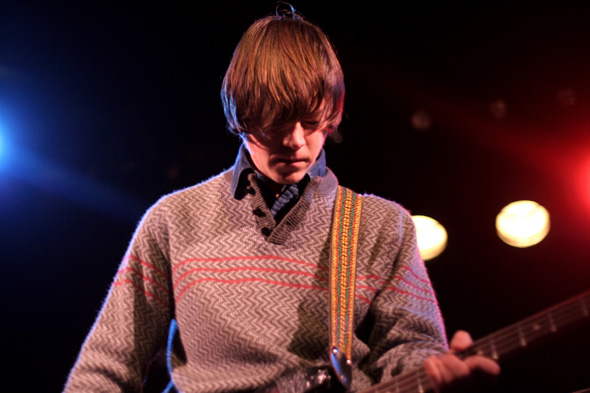 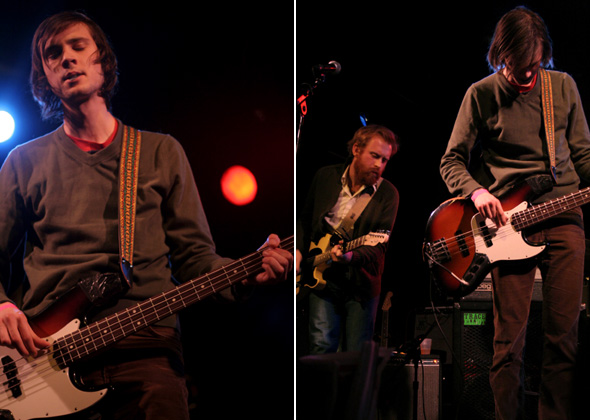 Attack in Black showcased their newer material, neglecting the more pop-punk oriented tracks that many fans were eager to hear. Ian Romano stepped out from behind the drum kit for an aggressive rendition of 'Only Child,' a song his brother Daniel openly referred to as a "hate song." 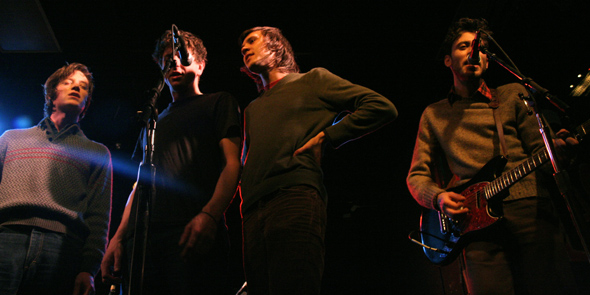 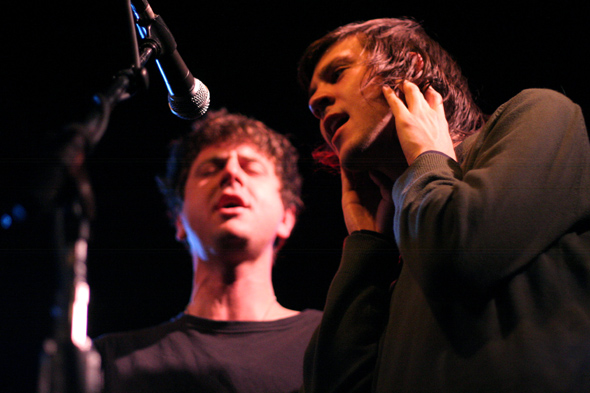 For their closing song, Attack in Black were joined by both the Cons and Samson for a cover of Neil Young's environmentally friendly 'Natural Anthem.' Huddled around a pair of microphones as Romano strummed his electric guitar, the nine performers could barely keep their faces straight as they struggled to read the lyrics off of the back of Ian Kehoe's bass guitar.

To say the venue was buzzing with anticipation would be a massive understatement. Having sold out the building well in advance, the Cons stepped on stage to a ferociously excited crowd. Though the temperature was rising, fans remained eager to push forward and start moshing. 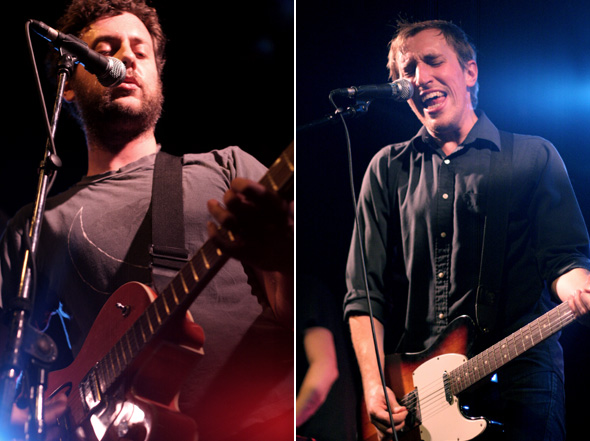 Guitarist Bryan Webb's volatile voice jumps from aggressive growl to calm and brooding. His vocals somehow manage to remain at the forefront of their live performance, despite the raw sonic force of the quintet.

Their set spanned their entire career, with the band bringing out some old fan favourites that had the diehards in a frenzy. They paid homage to the old without neglecting the new. 'I Will Not Sing a Hateful Song,' 'Hard Feelings' and 'Trans Canada' showed off 2008's Kensington Heights, their critically acclaimed Arts & Crafts debut.

The Cons expressed their endless gratitude on multiple occasions, both to their fans and the opening acts. Samson joined them to sing 'Little Instruments' with a huge grin on his face, before launching himself onto the crowd for what Webb described as the "fastest crowd surf ever." 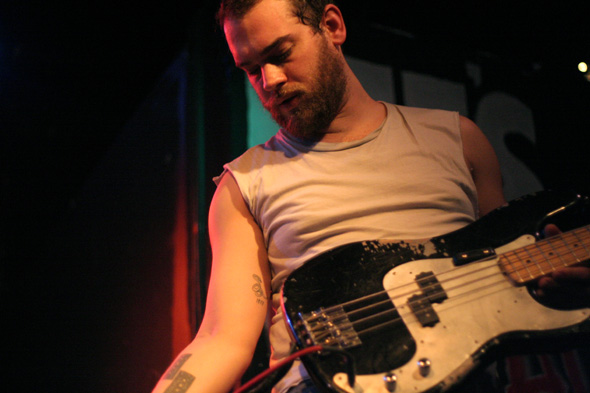 Bassist Dallas Wehrle managed to keep his white balaclava on for the duration of their two hour set despite the rising temperatures. He finally showed his face during the encore, where the band closed with 'Seven A.M.,' finally giving an answer to the audience member that had been screaming "hey Steve [Lambke], what time is it?" for the majority of their set. 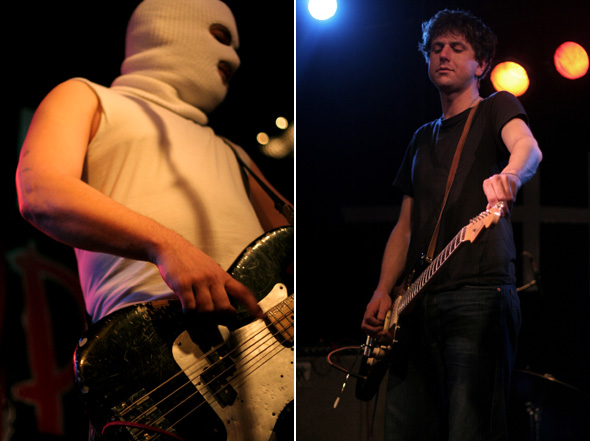 Even with such a momentous build-up to the occasion, the Constantines delivered an incredible set filled with the camaraderie and raw intensity that has made them the success they are today. With the first two dates selling out this past weekend, you may want to jump on the opportunity to grab tickets for their final anniversary show at Lee's on Saturday with Ladyhawk and Julie Doiron.

Check out the full set lists below: 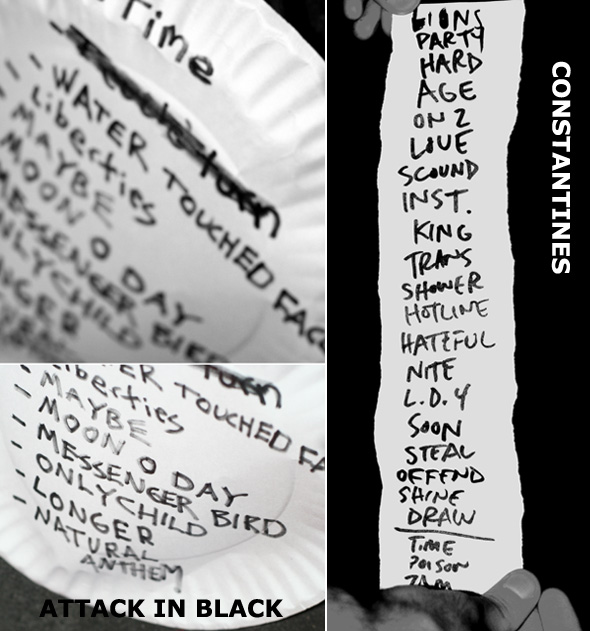