The Psychedelic Furs clearly enjoyed performing as much as the audience at the Kool Haus enjoyed watching them.

Led by an animated Richard Butler, who sings in a Sprechgesang style, the Furs' songs came alive on stage. Opening with Love My Way and continuing with a handful of hits, including President Gas, Ghost In You and the familiar Pretty In Pink, the title song to the 1986 John Hughes' film of the same name. 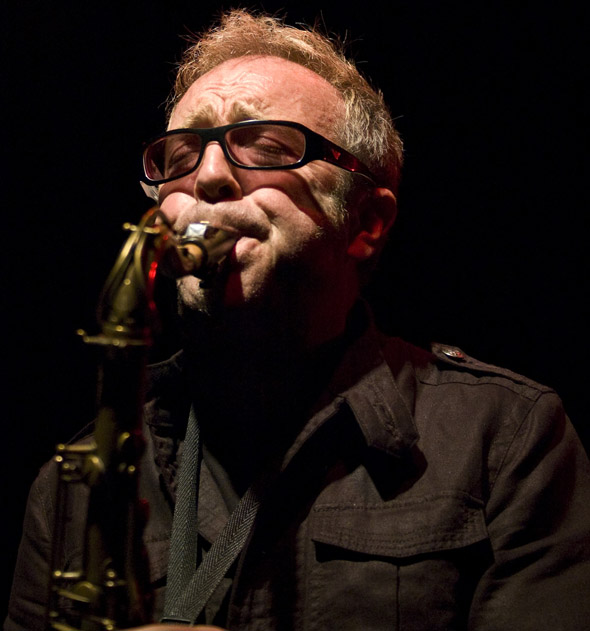 The bass was turned up to 11 for this show, making me feel my brain rattle inside my skull. But it was the saxophone that drove a lot of the songs. Mars Williams gave the band a supercharged jolt of energy with his adept playing. At times he even switched from alto to soprano sax mid-song. This guy was a firecracker on stage. I especially enjoyed his solo toward the end of Sister Europe.

Butler and Williams both moved around on stage a fair bit, providing enough visual stimuli for the songs, instead of relying on gimmicky lasers or too many flashing lights. Butler's nerdy glasses and black vest on a dark shirt combo gave off an elegant yet boyish charm. He often moved his arms about to punctuate the lyrics of his songs.

The five-piece backing band were tight all night, giving a musically solid show.

I missed Spirits, who started off the evening with a short set at 8 p.m. But I did arrive at the Kool Haus just in time to see The Happy Mondays, a holdover from the Madchester scene of the late '80s and early '90s.

I found the Mondays' 45-minute set rather boring. The band's got some great bass lines, which were amplified by the live mix, but most of the songs lost their appeal to me over time. There were a few die-hard fans near the front of the stage, but it was obvious that most of us were there to see The Furs.

Singer Shaun Ryder's thick Mancunian accent was lost on me as he mumbled something or other between a few songs behind his dark shades. I managed to make out that his nephew filled in on drums.

Singer Julie E. Gordon looked great in her pouffy skirt and black corset. Her voice was a nice addition to Ryder's, but she seemed to upstage him a few times.

Still, they managed to sufficiently warm up the crowd on this first zero-degree night in Toronto, getting a few more feet moving to the beat of their hit song cover of Step On, which got a lot of arms waving in the air, but not enough feet moving on the floor.

It's a pity their dancer Mark "Bez" Barry didn't make it through customs to join the band for the show. Perhaps he'd have had the Toronto crowd dancing sooner.