Kylie Minogue is Love at First Sight at Canadian Debut

Kylie Minogue wowed her fans Friday night at the Air Canada Centre in Toronto during her first ever Canadian performance.

The anticipation was thick before the start of the show, as there was a half hour delay from the scheduled start. No opening band. Just hordes of glamorous couples, eager to get their dance on. In darkness, among shrieks of anticipation, the 20th Century Fox theme song boomed from the speakers. Then she made her grand entrance.

Descending atop a metallic skull, Kylie was fabulously clad in a Jetsons-meets-Barbarella outfit, only with puffy boas on top. She kept the crowd on its feet for most of the two-hour-long disco-laden set, which included about a dozen costume changes, an athletic crew of hot, young dancers, a laser light show and video projections. 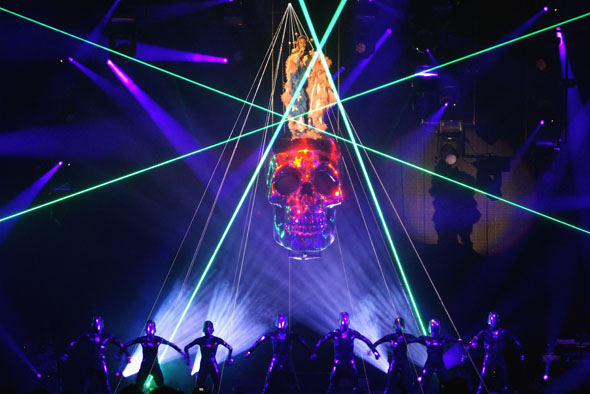 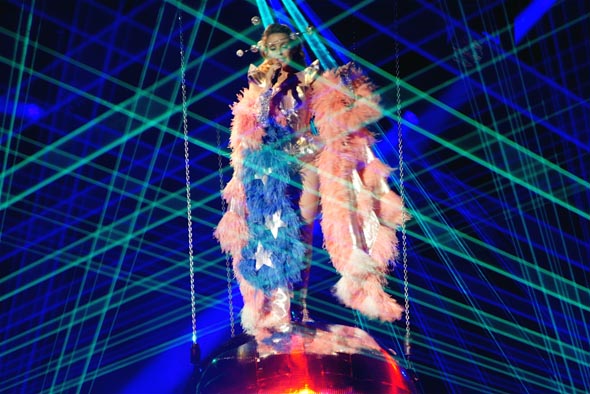 Looking awesome for her 41 years -- or for any age -- Kylie's spectacle of a touring show is something that Madonna and Lady Gaga could aspire to. 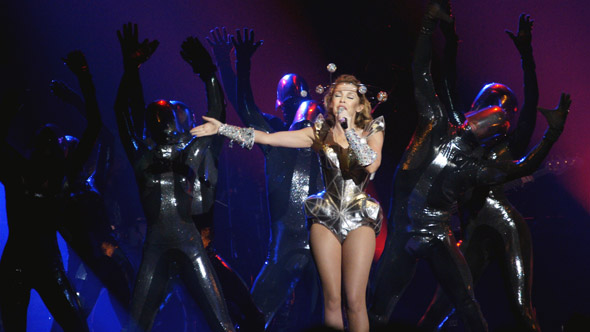 The dancing robots were right out of a Daft Punk video. Or was it Mr. Roboto? No matter, they provided enough eye candy for the hordes of fans, ready to absorb whatever the Australian pop star threw their way. 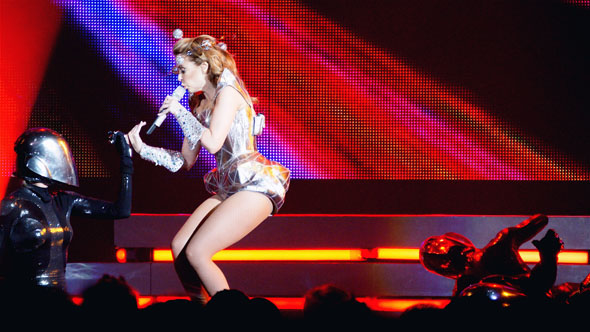 Only half an hour into the show, Kylie already had at least four costume changes. Each of her outfits showing off lots of leg: A white dress with an open back and silver sparkly heels complimented by a sailor's cap emblazoned with a big letter K. 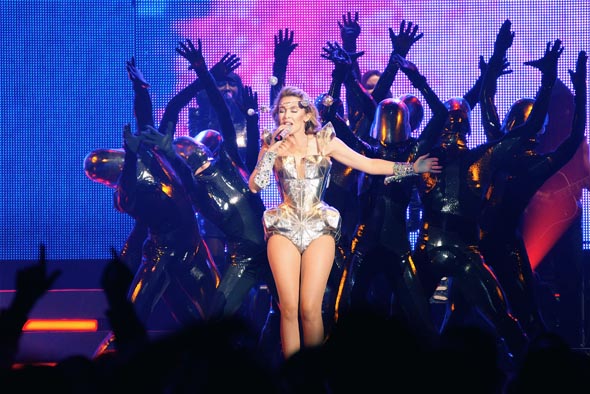 Can't Get You Outta My Head cranked up the crowd a notch, as we watched three dancing couples in all black shorts, knee-high boots, tank tops and baseball catcher's masks move in sync to the beat. 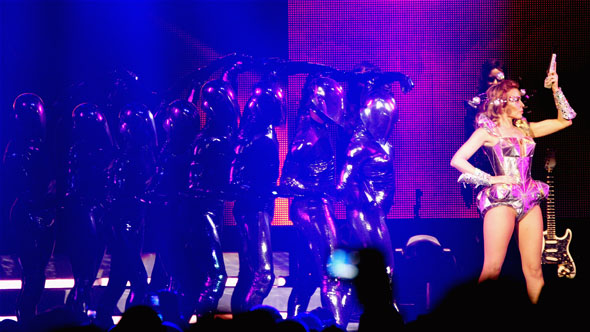 A four-piece band behind all the action at the front of the stage filled out Kylie's crew, playing synth-driven pop tunes throughout the show. At one point, the guitarist and bassist joined Kylie for a song, appearing to be on wirelessly-amped instruments. 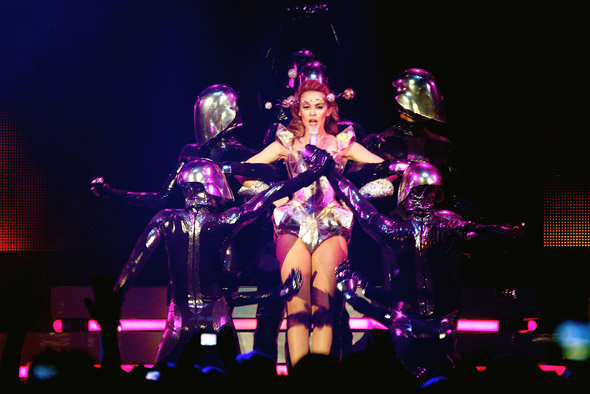 The band's guitarist, Adrian Eccleston, is from Toronto. He got a special introduction and lots of face time on the two giant screens on either side of the stage. Foxy and Lucy rounded up the ensemble on backup vocals, while a trio horn section (sax, trumpet, trombone) added some punch to several tunes. 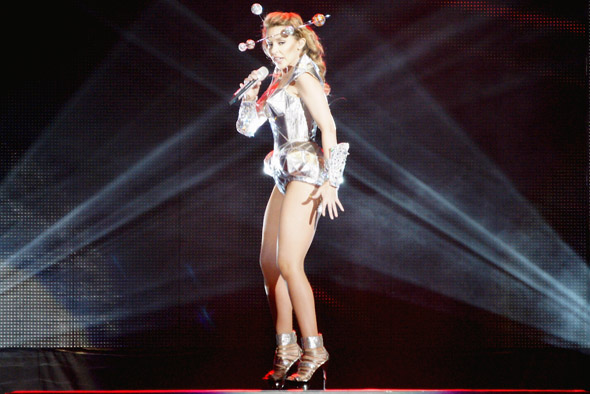 One particularly eye-catching scene played out on stage. Four muscular guys in Australian-flag swimsuits mock-stripped under red towels. They then lifted Kylie -- now wearing a sparkly black catsuit -- high up above their heads onto a pummel horse and led her to the front of the stage, continuing to move around her, much to the audience's delight.

A little later, Kylie walked on top of her dancers' outstretched arms, supporting her with their bare hands, as she strode across in her eight-inch stilettos. Ouch.

Kylie slowed things down only a touch with a segment of her beautiful song, Where the Wild Roses Grow. I'd have loved to hear her sing the complete song, but it wasn't that kind of show. She kept the momentum going, kicking it into high gear with more of her upbeat numbers. 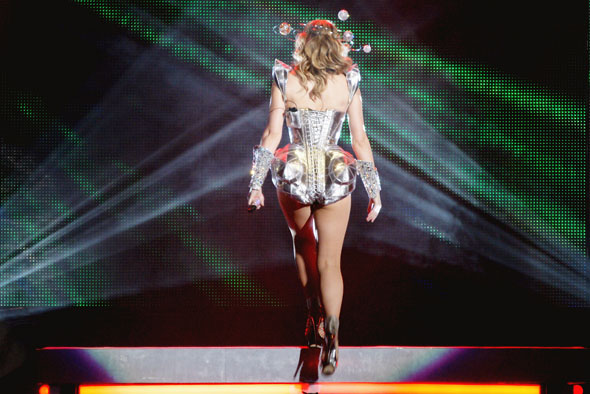 The only other slow moment in the concert was during a three-minute interlude (another obvious costume change diversion) where we saw black-and-white projections of images of what could possibly be Kylie dressed up in other fancy outfits. A little self-serving, perhaps.

What followed was her White Diamond song, sung lying on a red chaise lounge, surrounded by a gold tiger statue on each side. I didn't quite get the storyline, as a well-dressed suitor came to woo her, only to shun his advances.

I Believe In You slowed things down, but culminated in red confetti being dropped from above, looking like red flower petals falling on the crowd. This was followed by yet another costume change and a cover of Madonna's song Vogue. And Kylie wore thigh-high boots, a black corset with feathery, veiled headdress to sing a modernized, jazzed-up version of her first hit single, Locomotion, which launched her singing career way back in '87.

"Did you sway your hips?" she asked the crowd, after her band left the stage? "Are you ready to sing with us?" But she meant her two backup singers, not the audience, who was content to just wave their arms in the air. 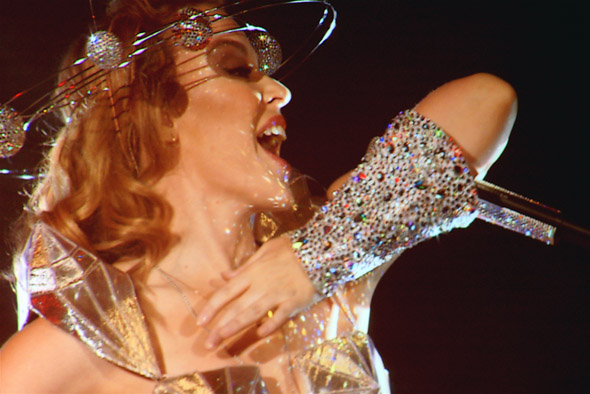 It was quite some thing to see: an arena full of frenetic Kylie fans, save for the entire 300 section, which lay completely empty. Even at just $34.50 for the cheap seats, I'm surprised not more tickets were sold.

The dancing robots made a repeat appearance towards the end of the night. This time in black, gold, red and pink, dancing along to In My Arms.

After five minutes of enthusiastic cheers from the crowd, Kylie was back for the encore, wearing another white outfit. This time with a poofy, open-slit front but tapered at the ankle, resembling jodhpurs. The lady's got style. Or at least a sassy stylist. They brought out the horn trio again for Better The Devil You Know, another danceable disco number. Followed by The One, which led to a sea of arms swaying in time to the beat.

The night ended with Love At First Sight, which was apropos to the evening. Toronto surely loved Kylie Minogue.

Here's a fun little snippet from the Kylie Blog, detailing their experience in Toronto: