Kid Koala's The Slew is like Rap Rock Stew

There was a full moon, Nuit Blanche was revving up and I couldn't think of a better way to kick off such an auspicious evening.

Four years in the making, The Slew is Kid Koala's most ambitious project to date. Originally a documentary soundtrack project undertaken with Seattle turntablist Dynomite D, after the film collapsed the two DJs approached Wolfmother members Chris Ross and Myles Heskett, and together they laboured in the studio to bring seventy minutes of hard rock scratching, guitar licks and big meaty beats to fruition as The Slew. 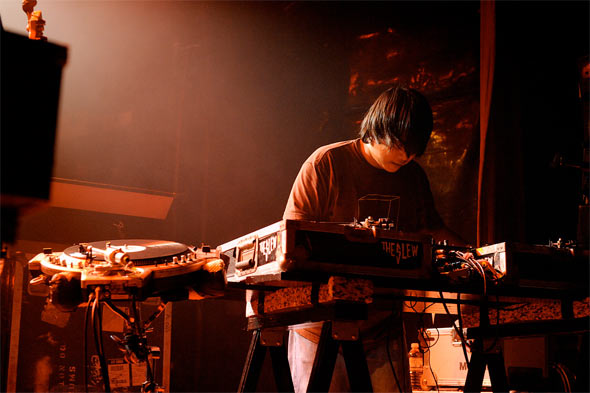 Metal and Hip Hop have combined before in a number of rarely successful (think Run DMC/Aerosmith's "Walk This Way") or often horrible-terrible (think Linkin Park or Korn) ways - but Kid Koala and crew have produced something truly unique and memorable here.

The Slew bring the best of both turntablism and rock with a synergy of blues, rock and metal samples, slamming, heavy bass riffs and righteous drumbeats. Kid Koala and DJ P-Love (stepping in for Dynomite D) perform on three turntables apiece, with Chris on the bass and keys with Myles on drums. They're calling it 'grunglism'. Even the shoutouts and band introductions were sampled and scratched. The crowd loved every second of it, pumping fists and screaming their approval. There were quite a few people dancing too - you can't take the funk out of Kid Koala.

This one-time only tour, which ends tonight in Chicago after a limited run of 10 North American cities, features only tracks from The Slew's "100%" album, available as a free(!) download from Kid Koala's website. Ultra-rare copies of the album in CD and vinyl formats were available at the swag table, which also included black velvet tour posters and black "Slew" wristbands. 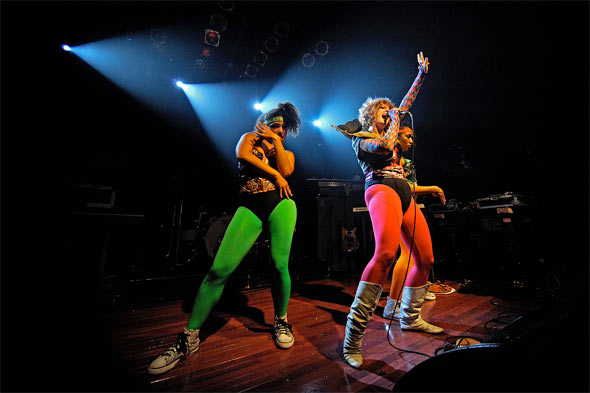 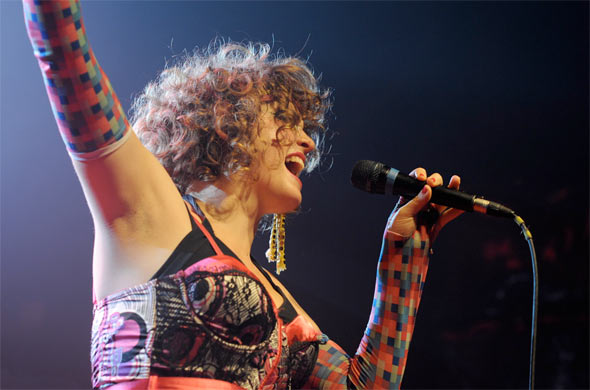 Breaking in the crowd for The Slew was Brooklyn's Adira Amram, a one-goddess-and-two backup dancers trio that blended rap, standup comedy and the 20-minute workout to produce a hit-song-laden festival of colour and motion. As Adira instructed the crowd, all of her songs are certified hits, in fact her current album "Hot Jams for Teens" is nine hits and nine hits only. It doesn't get any better than that! Amram entranced the crowd with her stage antics, pop anthems and (slightly) overstuffed leotardiness. And just when we thought it couldn't get any better, she rocked the house with her encore, a note-perfect, shuffle-perfect cover of Bel Biv Devoe's "Poison".

Review and photos by Hamish Grant.