Cuff the Duke Captivate the Crowd at the Horseshoe

Cuff The Duke played the first of two nights at the Horseshoe tavern last night in support of their new album Way Down Here, released last month.

I wasn't really planning on going to the show last night, but lo and behold, I ended up in attendance anyway. Extenuating circumstances aside, I wasn't so into their last album Sidelines of the City, and I had no idea so many people still really liked Cuff. But, against my expectations, I had a pretty good time. 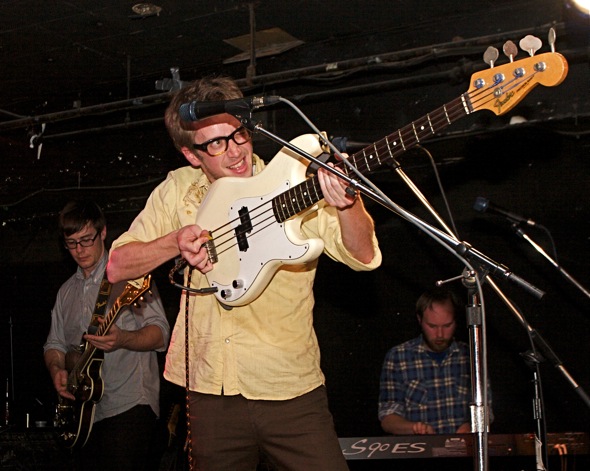 In a move that seemed just a little bit too theatrical, the band came onstage after a 20 minute buildup with the lights dimmed to Ennio Morricone's "The Good, the Bad, and the Ugly" theme music. It would have been a seamless transition if the track didn't skip most of the way through.

The entire place was packed with (what I would assume were) pretty hardcore Cuff fans. Evidence came in the form of a one guy yelling out (more than once) that he wanted to sleep with Wayne, an incident only slightly more awkward than the fangirl beside me with the "I heart Oshawa" shirt on and googly eyes. Someone also referred to a pedal steel as a "serious instrument." 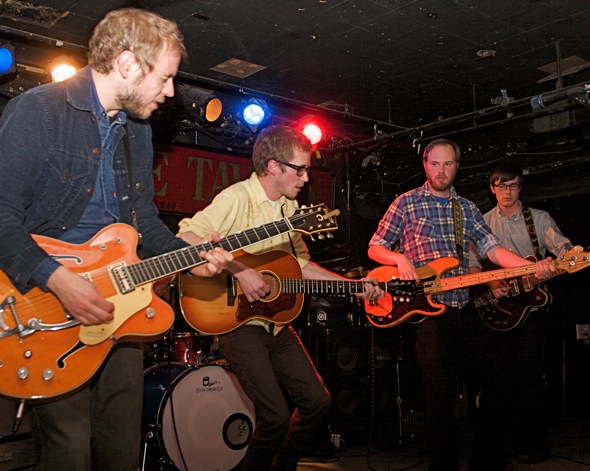 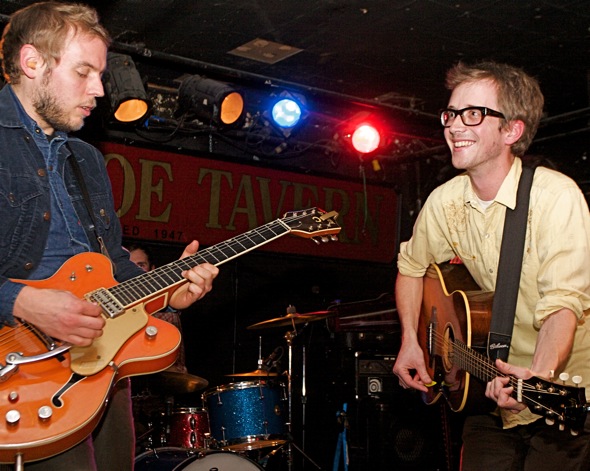 Cuff is really polished and streamlined these days -- as in, all their new stuff is straight up alt-country (lil' Blue Rodeo, anyone?). This isn't completely new of, course, but the experimental rawness and sometimes thought-provoking lyrics of the first couple albums has been replaced with a self-assured realism.

But okay, I said I had fun earlier on, and I wasn't lying. It's hard not to when not only the band takes themselves completely seriously, but the crowd does too. The only new song they played that I knew was the slightly awkward "Failure To Some," which I've heard may be about founding Cuff member Jeff Peers... No, wait, I just looked up a track listing to Sidelines of the City - I was also familiar with "If I Live or if I Die" going into the concert. But, despite my awareness (or lack thereof), a lot of the stuff they played off the new album sounded pretty solid.

Greg Keelor (Blue Rodeo), who brilliantly recorded Way Down Here joined the band for a couple songs much to the delight of everyone involved. They covered the Byrds "You Ain't Goin' Nowhere" and even did a brand new Blue Rodeo song (which may have been the most exciting part of the night).

Afterwards Greg told the crowd, "The sound is great, but the songs are iffy" referring to the new album, which prompted Wayne to encouragingly protest. Greg seemed still to be having fun when the band messed up a part of one song, even though I thought I saw a look of contained annoyance on Wayne's face. 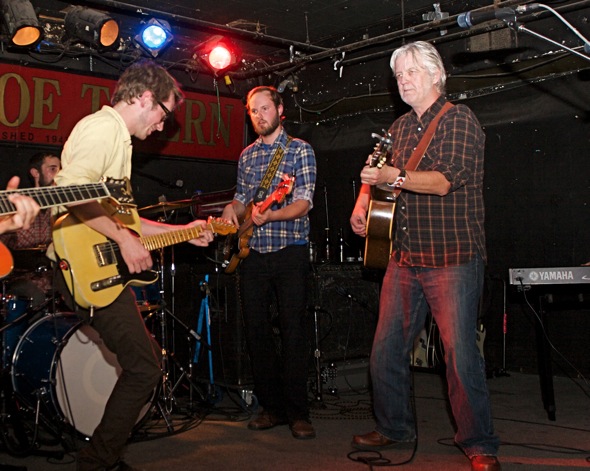 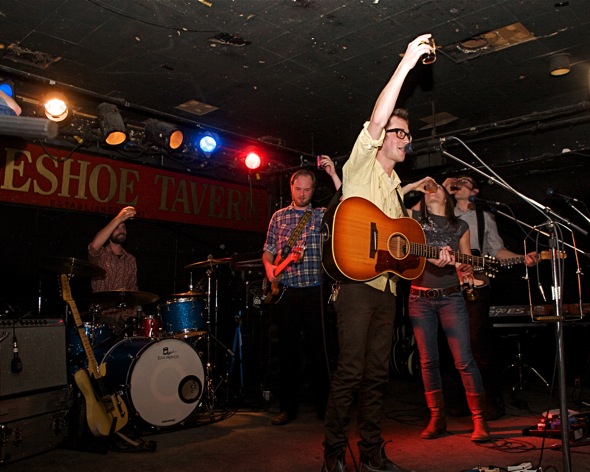 Also joining the band for a couple songs was 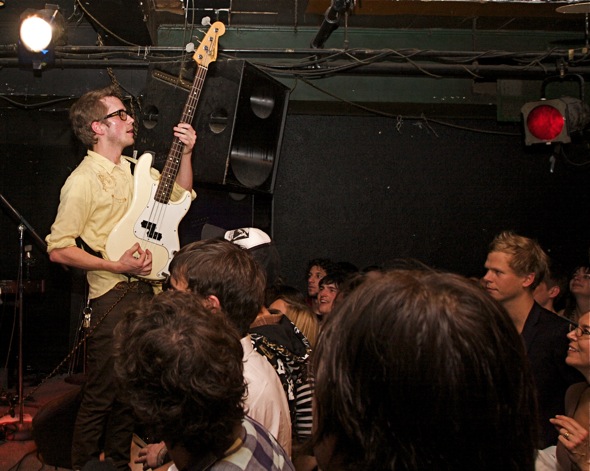 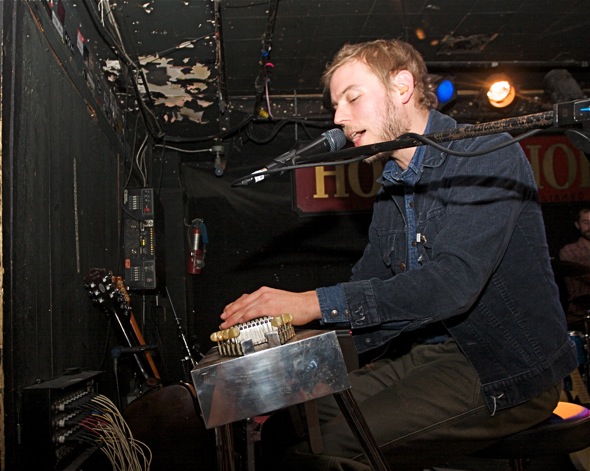 , a Halifax native who's based out of Halifax, Nova Soctia these days. She's got a beautiful voice and came prepared with shots of whiskey for the band. What more could you want? Another guest musician, perhaps? Well okay, they also had their friend Franรงois Turenne playing with them; he's apparently been joining Cuff onstage for some time now.Dale Murray, it must be said is a pretty great guitar player. He busted out a few impressive solo's, and his pedal steel playing really was serious. The whole band is really a bunch of technically apt musicians, and they all seem to work well together.

But this is clearly Wayne's show. He does a fair amount of pure mugging to the legion of fans and knows how to sell himself and his band. His falsetto can at times be impressive and also slightly frightening, but he's extremely enthusiastic and very adamant about crowd participation, getting everyone to sing along more than once and shouting out to everyone involved in the show (I think he thanked the Horseshoe bartenders as well). 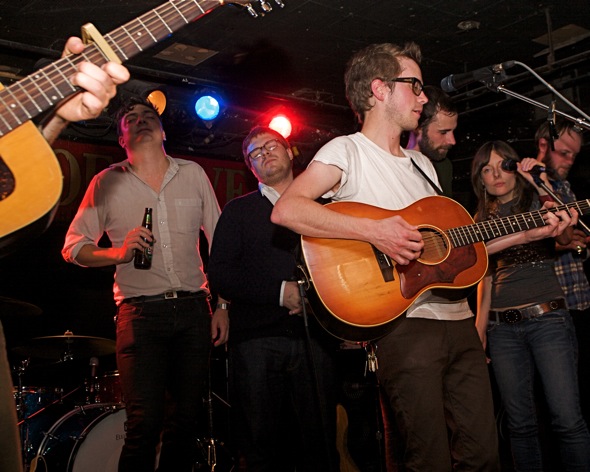 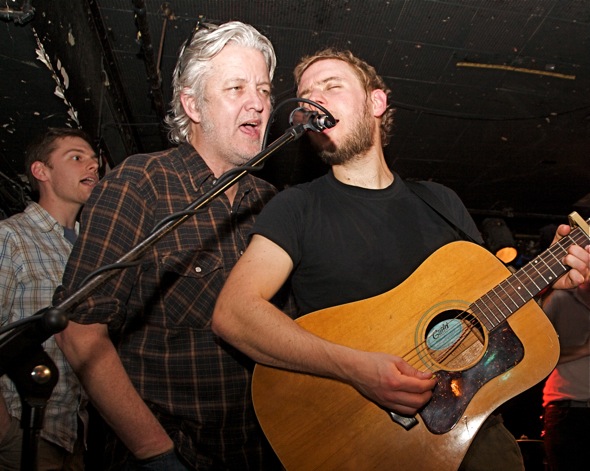 In the end, I would highly recommend going to Cuff's show tonight at the Horseshoe (tickets are still available), if you didn't get to the one last night. Oh, and the Great Bloomers are opening the show, and they're great, so that's an added bonus.

Check out more of my photos at ivyleah.blogspot.com