A Good and Lovely Zombie Prom at Lula Lounge

A couple of weeks ago, I was driving home from work and listening to CBC's Here and Now, when host Matt Galloway put on a track by a trio called the Good Lovelies.

I was instantly grabbed by their infectious three-part harmony and the sly wit of their lyrics. I wrote the band's name on my wrist and resolved to look them up when I got home. An hour or so later I had paid for and downloaded their album and scoured their website for tour dates in Toronto. Sure enough, there was one - an event called Zombie Prom at the Lula Lounge.

The Good Lovelies are an all-girl folk trio based around the GTA, touring coast-to-coast to support their self-titled CD released in January of this year. They released a debut EP, Oh My, in 2008.

Fast forward to last night...
I had made arrangements to meet with the band ahead of the gig and take photos. I arrived at the Lounge and discovered the Lovelies setting up Halloween decorations and generally buzzing around while their opening act, the Human Statues, did a sound check. 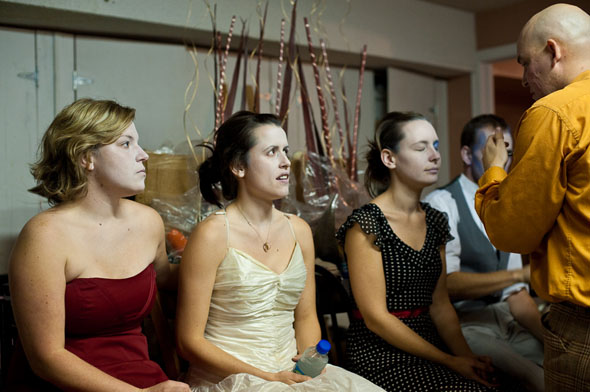 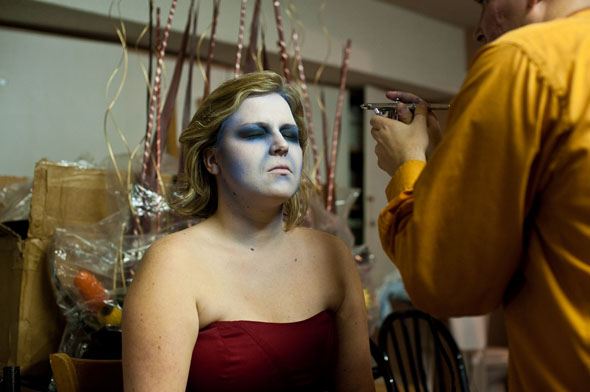 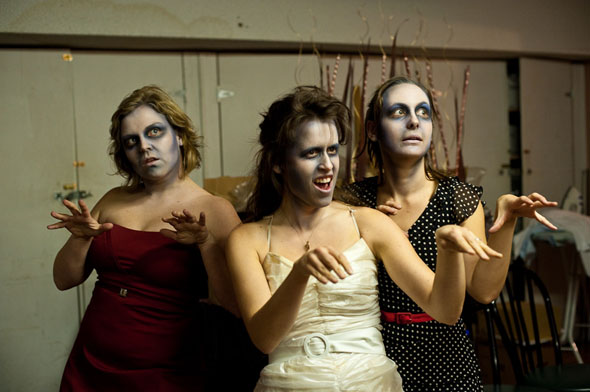 The Lovelies' Kerri Ough greeted me warmly and we ended up chatting while they and the Statues had their zombie makeup applied. This was the hook for me - a folk band who fall somewhere between the Andrews Sisters and the Dixie Chicks, with an familiar, urban wink, who are willing to dress up like zombies and play out to the hipster crowd at Lula Lounge. What was going on here? 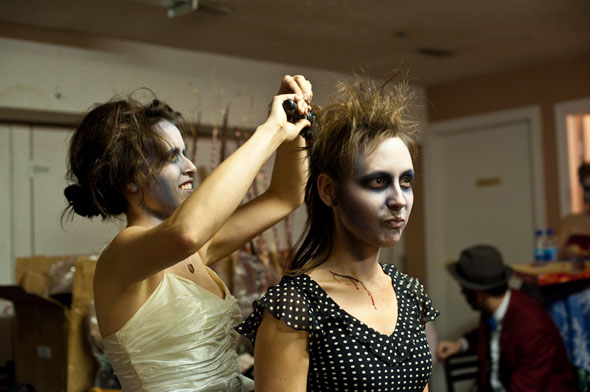 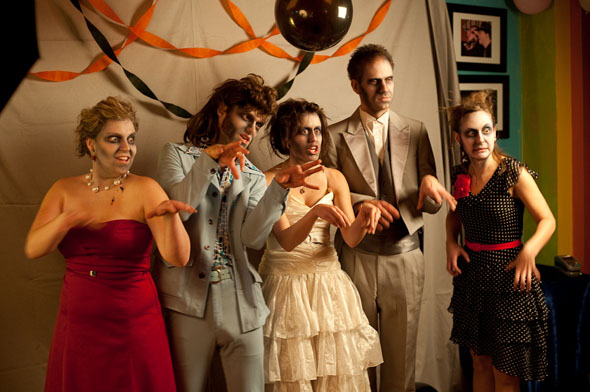 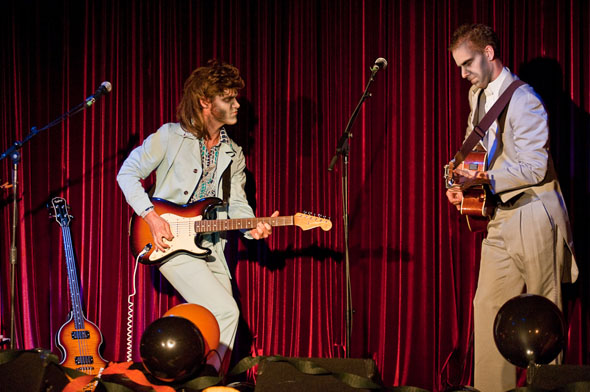 Well, they like a party, for one, and as bandmate Caroline Brooks told me, "they always want their shows to be events." And stuff just seems to happen. One gig they played recently in Winnipeg turned into a geocaching flash mob; over 70 attendees had found the concert by following a trail of GPS coordinates and cached clues. So playing a Zombie Prom wasn't a stretch. It was almost normal, in fact! 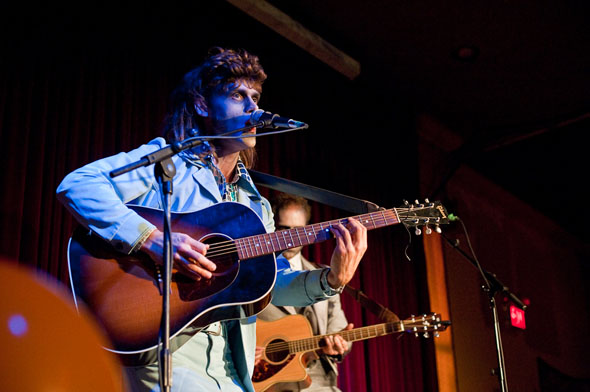 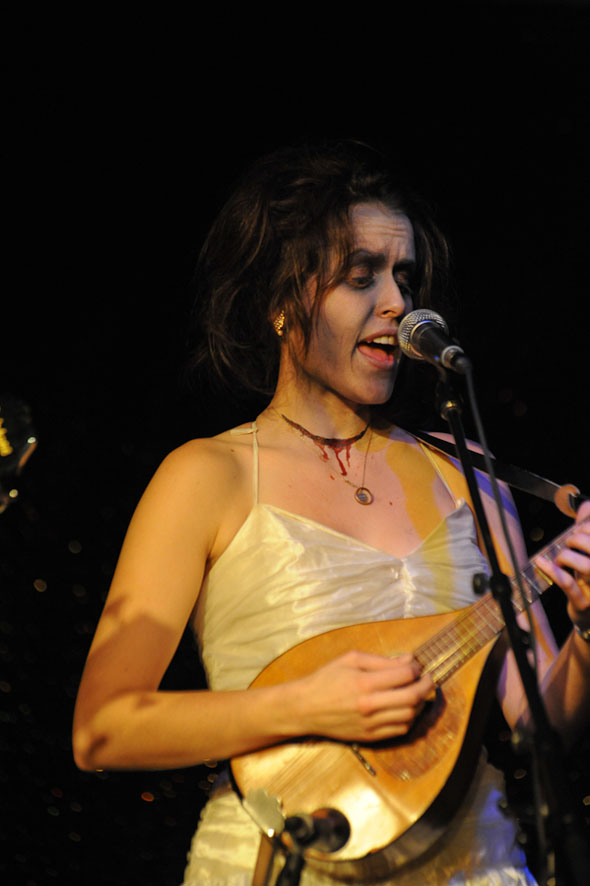 The Lovelies, Ough, Brooks and Sue Passmore all hail from small town Ontario, and all left full-time jobs in the past year and a half to pursue their musical ambitions together. In 2009 alone they've played over 160 dates, with more to come. The music speaks to why they've become so busy: confident, well-orchestrated upbeat folk.

All three play multiple instruments and exchange them song to song, and they take turns singing the lead (with the other two joining in harmony as required). When they sing together, it is a sweet sound and it's truly, lovely. In their live show they maintain a banter with the audience and with each other, sharing stories from the road or embarrassing childhood moments, always funny and engaging. They're so upbeat it's downright infectious - a perfect antidote for these trying times. 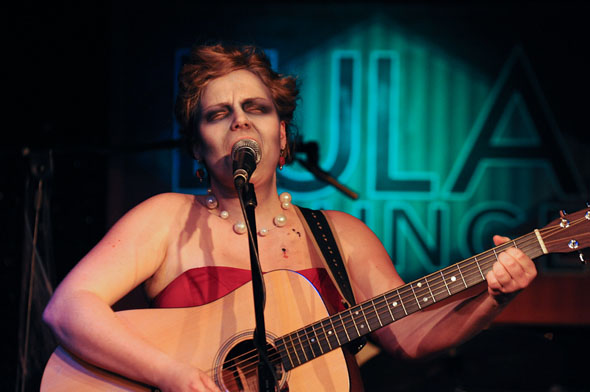 Back to the Zombie Prom. Suitably made-up in dramatic undead makeup complete with grisly gashes and bullet holes for effect, and dressed in semi-formal retro frocks, they took the stage (after a really terrific performance by the openers The Human Statues, who themselves were zombified and dressed in tuxedos - one grey with tails, the other baby blue nylon circa 1976). They instantly grabbed the crowd's attention.

Along with drummer Adam Warner they played through a set that included most of the songs from their album and EP, (you can listen to a selection of tracks at their website and myspace page) and a few covers - with their finale being a super-set with the Human Statues, playing each others' songs and ending with an awesome (and appropriate) folk version of Michael Jackson's Thriller. 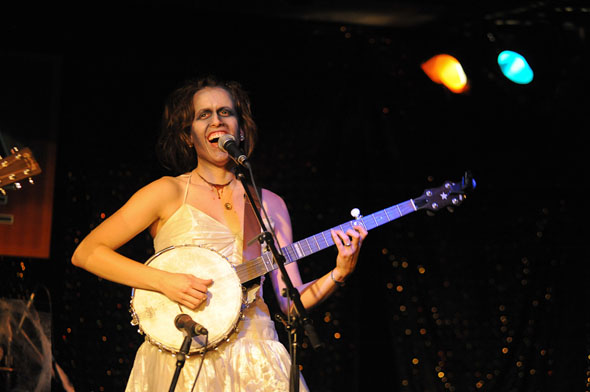 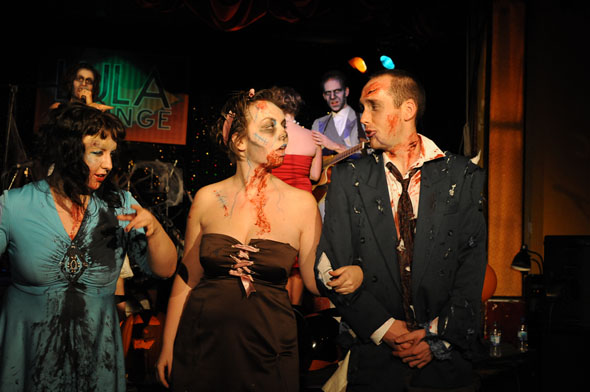 Midway through the set a zombie promo king and queen were picked from the audience, who had been encouraged to come dressed to death. After they left the stage, a CD of the Lovelies' favourite spooky dance music was put on and they danced the night away with fans and friends alike. It was a real treat to spend an evening with the Good Lovelies.

For the curious, they have a new collection of Christmas Songs coming out on November 15th and the CD release party will be at Hughes Room on December 6th.