Secret Broadcast are quickly becoming something. In two years, this Calgary-based rock band has accomplished a more than a few memorable feats, and experienced enough encouragement from industry big-wigs (Richard Branson of the Virgin empire) to keep them working hard at their craft.

They had already embarked on their tour to promote their first full-length, 'Exploding Spiders,' so I was happy to settle with a phone call from Toronto-native, Matt Lightstone (guitars, vocals) instead of the usual sit down interview. He told me about how sometimes just picking up the morning paper can land you in a band.

"We all met through an ad in the newspaper, basically. The equivalent to Toronto's Now Magazine is called FFWD, and the bassist [John De Jesus] and I hooked up first and started writing right away. The process of writing was to get in a room and spontaneously jam something out and immediately the magic happened. Within a couple months we had enough material and started playing a couple of shows." 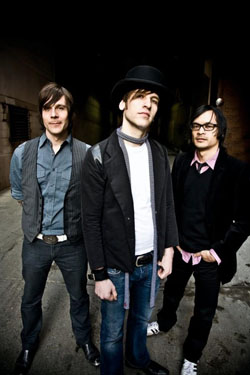 Matt had already come into brief and borderline-unpleasant contact with Brian Craig, who would eventually become their drummer.

"I had initially put out one ad, and the funny thing is our drummer had done the same thing before we had hooked up, and he contacted me. So, we set up a jam and it never actually happened, because at the last minute he backed out. And it wasn't until six months later, when I was going over my old e-mails that I realized that it was the same guy. I was like 'you're the fucker that blew me off'.

Shortly thereafter, they released an EP, which was "easier to finance than a full-length", and that allowed them to win a few contests. One got them on the roster for Virgin Fest '08 and they were flown out to Toronto to play a private show for Richard Branson.

"It was pretty cool, because I wasn't expecting him to actually be there. It was just kind of an after party, but we did an interview backstage and then we walked out and he's sitting at a little booth with his entourage, not two feet from the stage. And we're like 'oh my god it's Richard Branson'. It was very awesome. He ended up introducing us and got up on-stage and danced while we were playing, and he even requested an encore. He's a really cool guy."

Another contest left them with a grand prize of $15,000, which meant they were now financially able to birth their debut album, 'Exploding Spiders.' While Toronto is the hub for Canadian indie-rock, I'm discovering that there are a lot of West coast Canadian bands that are not shying away from a bigger, more mainstream sound. Just good straight rock music -- that's what you'll find on this album.

"We really wanted to diversify from what was on the EP, and I think it turned out exactly like what we were going for, which is a powerful album that has an eclectic feel. We had some room to grow in the past couple years so the song-writing is a lot better."

As part of their biggest tour yet, their next stop is The Rivoli on Thursday, September 10th.