Tori Amos showed off her piano and vocal prowess, and an outfit to match, Monday night at Massey Hall.

She's still got a lot of flourish and finesse to her playing. But I missed the witty banter she used to dole out in between songs. It had been about 10 years since I saw her live in Toronto and I'm not sure I like the current, elegantly coiffed, '70s glam-inspired Tori as much as the one I was used to.

A shock of orange hair now straitened and (with extensions) running halfway down her back, she took to her piano bench in a flowing, blue dress with a generous opening down the front, revealing silver, skin-tight leggings. She provocatively straddled that bench as she put herself full-tilt into song after song without much pause or acknowledgment of her audience, except for a few curt thankyous. 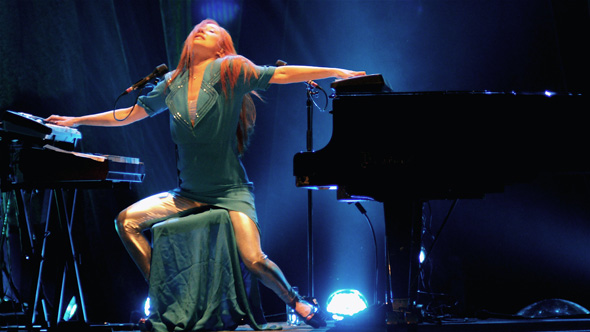 Her Montreal media photo op the next day seems to confirm my suspicions that Amos is currently somewhat confused about how to best portray her image. The tour program was rife with such glamour photo shots which she may have been trying to replicate for the local press.

Amos was perched upon one of the three platform-like stages, where she sat at a grand piano for most of the evening, turning around to face another couple of keyboards behind her every so often.

It was amazing how rich a sound she got from them (and her voice), accompanied only by two other musicians: a drummer to her left and guitarist/bassist to her right, each on their own little riser. It was like they were on three separate islands, not quite connecting with each other much visually throughout the night, but a pretty tight unit musically nonetheless. 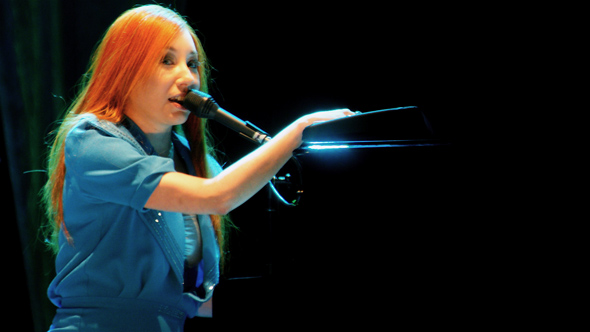 A half-disco ball on the floor of the stage, behind the piano helped scatter some of the sparse stage lighting, which added splashes of colour to the rather drab backdrop. The focus was obviously on the music.

Amos' tour is currently supporting her 10th studio album, Abnormally Attracted To Sin. Her songs, still often sounding like confessionals -- after all, her father was a minister -- gave me something to ponder during some of the longer, slower and drawn-out numbers. I began to notice that she started extending words like understand an extra two syllables.

Amos looked almost possessed at times, often getting up on her six-inch-platform shoes, standing with one hand each on the piano and keyboard, head cocked back, her hair glistening in the spotlight.

Similar to the Depeche Mode concert a couple of weeks ago, she didn't really hit her stride until the second half of the concert, when her accompaniment left her alone on stage under the "Lizard Lounge" sign, the backdrop a curtain full of blue LED lights, setting a new tone.

Her drums and bass were soon back again as they launched into what started out as a jazzy number. I spotted the bass player deftly switch from a stand-up bass to an electric bass mid-song. The instrumentation often made for an odd combination, as there was never a guitar and bass playing at the same time.

A few songs later and out came a replacement set of keyboards -- an organ of sorts -- that gave a little more oomph to her sound. The crowd, only about two-thirds capacity, finally came to life after a heavy intro of staccato drums and flashing spotlights signalling the opening of Precious Things from Little Earthquakes, creating an hypnotic effect. 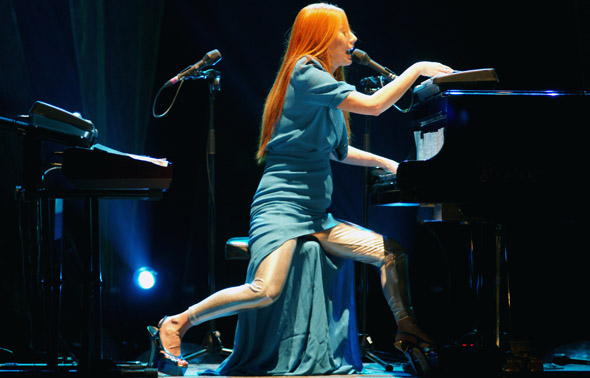 I left wishing she'd have performed more familiar songs from her earlier repertoire, such as Winter and Crucify. Or even one of her awesome covers, such as Smells Like Teen Spirit or A Case of You.

Before too long, Amos skittered off stage in her heels, returning for an encore that included Big Wheel, leaving the audience cheering for more.