Elvis Costello is one of those singer-songwriters who doesn't need to constantly reinvent himself. But when he does, it suits him.

Last night's Elvis Costello and the Sugarcanes concert at Massey Hall proved to me that "the other Elvis" is a versatile musician, even backed by a six-piece country band. His songs didn't all translate that well to this genre, but his consummate musicianship won out and won over the packed audience, treating them to a two-and-a-quarter-hour show.

It's no coincidence that Costello was named one of Rolling Stone Magazine's 100 Greatest Artists of All Time. Husband to Diana Krall and host of Spectacle TV show, Costello took the stage in his trademark thick, black glasses and dark suit and tie. 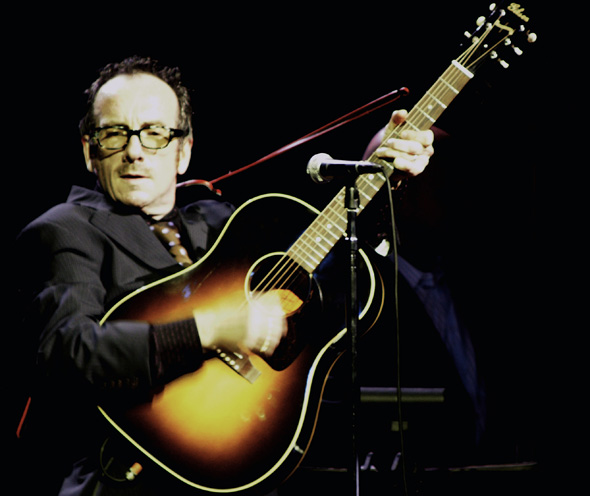 The stage set was all dark with a velvety curtain covering the entire back of the stage. No fancy set design this time. Just some awesome songs.

Costello's band included a fiddle, steel slide guitar, mandolin, stand-up bass, acoustic guitar and accordion. Note the absence of a drummer. Had he not been so famous already, this ensemble wouldn't be out of place at The Dakota. With a subtle flick of his shoulder or shake of his head, he conducted his band, almost always facing the audience.

Costello has worked with many other talented musicians, including Paul McCartney, Tony Bennett, Lucinda Williams and Brian Eno. One of my favourite songs of his, I Want You, has been covered by Fiona Apple as well as Barenaked Ladies' Steven Page.

I'm not sure I'd enjoy hearing I Want You with the instrumentation used in last night's concert. But the country treatment did give some of his other hits, such as Indoor Fireworks, Everyday I Write the Book, Alison and the final encore (What's So Funny About) Peace, Love and Understanding, a refreshing update.

Costello's banter between songs was often amusing. "Knowing this is a fancy place I thought I'd bring my electric guitar. Don't get too excited it's only got four strings."

While the new material translated particularly well live, including She Handed Me a Mirror, a song about Hans Christian Andersen off his latest album, Secret, Profane & Sugarcane. Costello said that the author was, "as they say in England, 'unfortunate looking,'" and this song was about the Ugly Duckling himself.

Having just surpassed "the 55 mph mark," earlier this week as Costello put it, and after 30 years of making music, he's showing no sign of slowing down. At one point in the concert he asked, "How'd you like to hear a new song?" Seconds later, adding, "Yeah, I wrote it this afternoon.... You think I'm kidding?"