Erin Lang and Earl Grey at the Linux Cafe

As I pull up to the Linux Cafe on my bicycle last Tuesday I was almost able to ignore the scent of warm garbage wafting through the air as a crowd gathered outside the quaint venue. Among them stood a poised Erin Lang and a meek yet cheerful Brooke Manning.

Local singer-songwriter Erin Lang took the stage performing selections from her EP Foundlings and Strays. Erin can often be seen playing with Roger O'Donnell (The Cure, Psychedelic Furs) and Nick Lisher (Ecce). However on this evening she stood alone in the dim limelight.

The opening set began with a performance by Brooke Manning accompanied by a cellist. Her ambient and melodic folk songs possess a sadness that contrasts with her contagious laughter between performances. Her minimalist instrumentation allows her vocals to become the central focus of her performance, and rightly so as Manning's voice seems flawless as it oscillates from goose bump inducive lows to heart-warming highs. 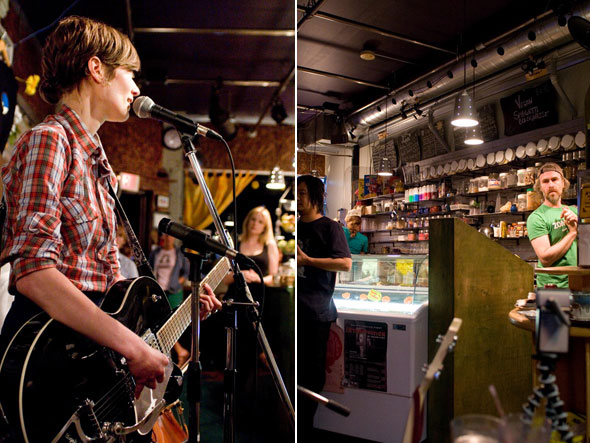 With elbows rubbing against each other it was evident that the Linux Cafe was not the ideal location to fit a performance of this size. Nonetheless, Erin Lang approached the stage exuding a childlike grace, tucked away in the quaint venue strumming on a ukulele that appeared as though ripped from 1950's suburban boyhood dreams.

Midway through her set she picked up a Gretsch guitar, weighing her small shoulders down, yet her vocal capabilities and playing certainly didn't fall short. She appeared confident and comfortable in front of the crowd as though her home was somewhere within the sea of our applause.

Our mouths were stained from blue freezies and Earl Grey tea by the end of the set. My ears full of summertime folk melodies. Why is it I find myself stumbling into the most beautiful scenes always stuffed into this city's smallest crevices?

Erin Lang will be playing next at the Magpie Tavern in Toronto this Thursday July 16th before embarking on a number of tour dates in the US. Brooke Manning will also be playing the Magpie on July 19th. 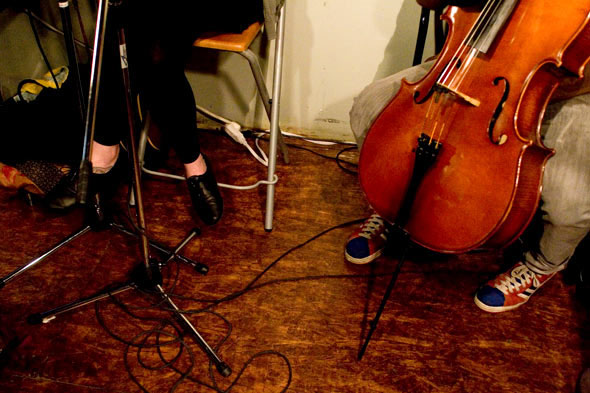