The Shuffle Demons, famous for a brassy mid-eighties pop song called 'Spadina Bus', are up to some Canada Day shenanigans this week as part of the Toronto Jazz Festival.

The band is celebrating their 25th anniversary, a remarkable milestone considering the transient nature of the Canadian music industry. This Wednesday they are attempting to break a Guinness World Record for the largest saxophone ensemble...ever.

Our fair city held the previous record in 2004 (also orchestrated by the Shuffle Demons) but it was broken by a group of Taiwanese sax players last year.

The Demons', headed by frontman Richard Underhill, will be leading approximately 950 sax players in a five-minute version of 'Oh Canada'. Hosted at Nathan Phillips Square, this brazen concert will be among the largest, and definitely jazziest, Canada Day celebrations in the country.

I got a chance to chat with Richard this week about Toronto in the 80s, the TTC, and fashion trends that never die.

blogTO: I've heard of plenty of things 'Made in Taiwan', but not many things broken. How did you feel when they stole your world record?

Richard Underhill: I was really surprised that anyone was able to beat our record of 900 saxes playing together. Of course I was disappointed, but I was also happy for the Taiwanese group, because I know what a great event we had, and from the video I saw, it looked like they were having a lot of fun! That's why I encourage everyone to come out on July 1st. More than reclaiming our record for personal and national pride, it's about getting together with 1000 saxophone players and making a great big preposterous noise together.

What was it that interested you in this particular record in 2004 in first place?

Richard: It was the 20th Anniversary of the Shuffle Demons (25th Anniversary this year) and we wanted to make a big slash to let the world know that we were back, so we thought of breaking the record. What started out as a publicity stunt quickly turned into a really amazing community event, with Fathers and daughters playing together, kids from 8 years old up blowing their horns, 60 year old's who hadn't played in 30 years dusting off their saxes, and people flying in from Victoria to do it. We also had about 15 bass sax players (who knew there were that many around??). It really was an amazing event!

Do you still live in Toronto? What are your thoughts on how the transit system has progressed since your song 'Spadina Bus' in 1986? Do you still prefer buses over streetcars?

I do still live in Toronto. I moved here from BC in 1982. I think the transit system has progressed, but like the cycling infrastructure, has failed to keep up with changing attitudes. In terms of transit, Europe and even some parts of North America are far more advanced and forward thinking than Toronto, which seems to have a special red tape department that holds us back. We must provide an amazing transit system to lure people out of their cars, not only for the benefit of the planet, but for the benefit of public space and business. I do applaud the city for fighting for dedicated streetcar lanes (we need dedicated bike lanes too!) and in that regard, I have to admit, wait for it, that I actually like the Spadina Streetcar better than the old 77B, as charming as it was!

Do you guys still dress in Keith Haring-esque pastel colours and graphic black lines? Those clothes are still pretty hip even now...

Kurt Swinghammer designed our suits in 1988, and even though we repaired them many times (one suit was left in a dressing room, others disintegrated) we got new suits made in 2004 courtesy of Red Pepper Spectacle. The suits are great, because when you put one on, you become a Shuffle Demon character. They give you permission to be wild and crazy and yep, they still do look pretty hip!

What about breaking the world record with 1000 sax players playing 'Spadina Bus' across the transit system in unison next time?

That sounds like fun! The reason we chose O Canada this time (and we did do a cool arrangement of it) was that we didn't think Spadina Bus would resonate with enough people. A lot of kids generally come out to one of these World Record attempts, and we didn't think enough of them would know the song. The other thing is that the Guinness people want to see 5 minutes of written music, no improv (boo). So that's why we haven't done Spadina Bus - it's almost all improv! The best part of the last attempt in 2004 was when Jaymz Bee called for a couple minutes of free jazz! What a sound! So I'm sure we'll do something like that again.

I hope that people get together with friends and come out to the event on July 1 at Nathan Phillips Square. It's going to be a really fun time and honestly, even if you haven't played in 10 years, you will be welcome. Even if you just stand there with a sax, we'd love to see you! 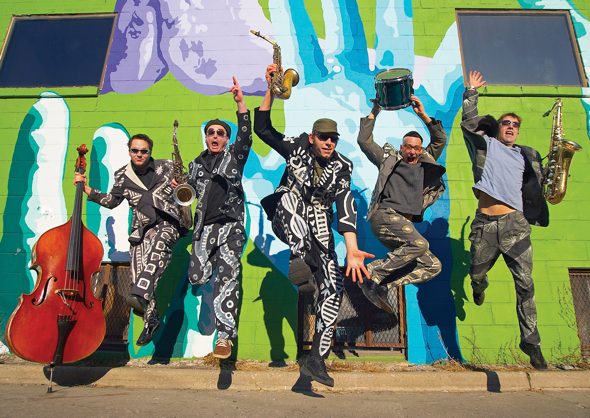