No Doubt, it was a Hella Good show

There was no doubt that Gwen Stefani was back with her old band, No Doubt, and in fine form Tuesday night at the Air Canada Centre.

The moment a giant white scrim was lifted from the stage, the capacity crowd rose to their feet as the band launched off with Spiderwebs with a futuristic white stage set and matching costumes. The audience kept cheering on throughout the band's 100-minute set, which included the hits Hey Baby, Hella Good and Underneath It All.

The backdrop included a huge screen, upon which was projected a variety of images, including early footage of the band at times and animated videos of what can be described as Tokyo circa 2020. When green lights were shone under the elaborate catwalk-like stage construction it looked like a huge spaceship had just landed, with the drum kit on top and a backup keyboardists/horn players/back-up vocalists Stephen Bradley and Gabrial McNair on each side. 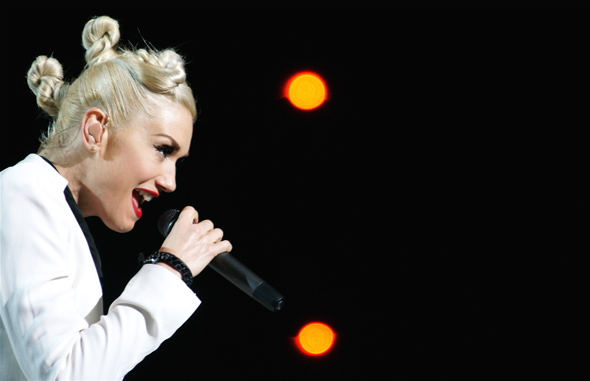 The biggest cheers came when they launched into their '97 hit Don't Speak, which prompted a giant singalong. 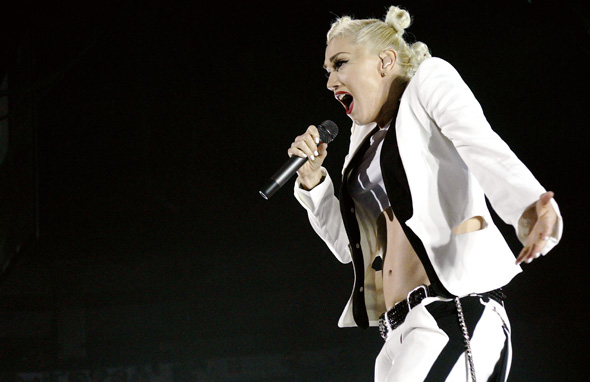 Stefani was certainly one to watch throughout the night. She made good use of the big stage, strutting her stuff in knee-high combat boots, her dyed-blonde hair in tight knots, à la Björk and wearing a chic black-and-white ensemble that bared her sculpted abs. She'd later transform into a black-and-silver sparkly short dress in her first of two costume changes. 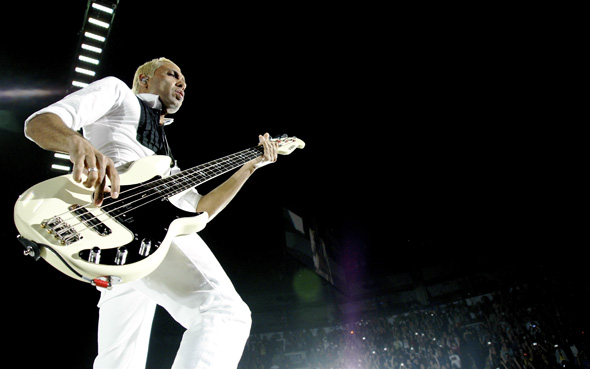 The rest of the band, led by Stefani's former boyfriend Tony Kanal (pictured above) on bass and Tom Dumont on guitar, were animated enough throughout the show, interacting with Stefani and proving that it wasn't just a one-woman show. Even drummer Adrian Young, with his mini Mohawk and black lipstick, got in on the act. During the encore he pranced about the stage in a pink tutu, even marching off the stage and into the crowd at one point.

It was great to see Stefani back with her old bandmates after five years apart. In that time she forged a successful solo career and had two children with Bush frontman Gavin Rossdale. Judging by the age of this show's audience, there were plenty of newer fans, many of which likely followed Stefani after her successful solo career, buoyed by the popularity of songs (and accompanying videos) such as What You Waiting For and Hollaback Girl. 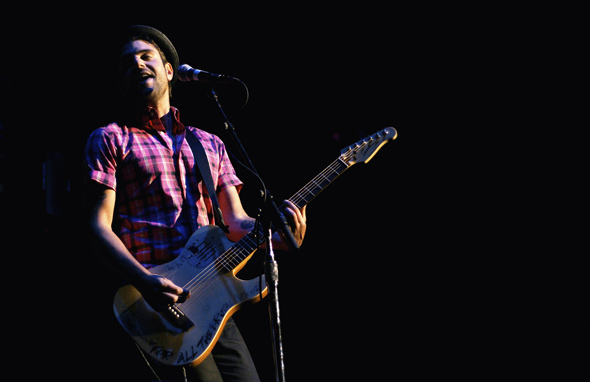 Before her band even took the stage, fans were eager to snap her photos of Stefani. Squeals broke out during the set of opener Bedouin Soundclash (singer/guitarist Jay Malinowski, pictured above) as she was spotted to the left of the stage with babe in arms.

Stefani certainly was a crowd pleaser, inviting fans up on stage with her a couple of times. Four young, enthusiastic fans in the front row were acknowledged by Stefani as they all wore homemade No Doubt t-shirts and appeared on the big screens flanking both sides of the stage, waving a banner in excitement.

"The only reason I came on tour is to see you girls," said Stefani (video here). I caught up with them after the show and they were still on an adrenaline high. 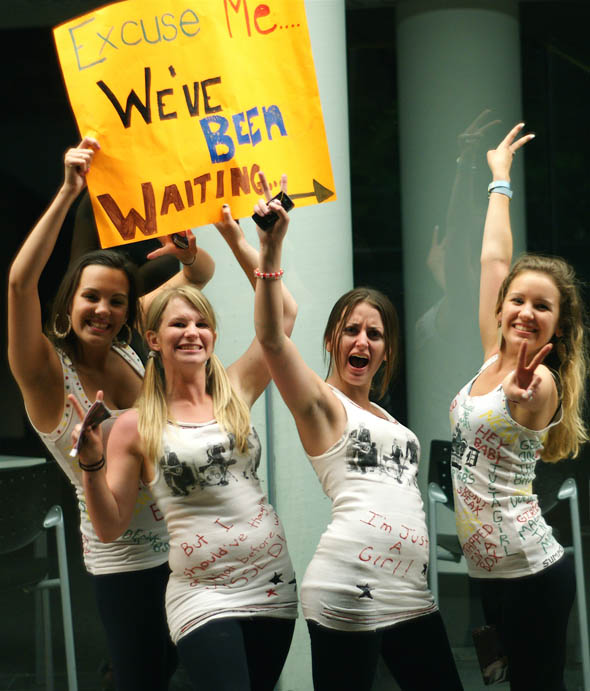 (From left) No Doubt fans Kylie Gatehouse, 20, Katelyn Pot, 18, Jessica Myhaluk, 18 and Carly Hall, 20, all came in to Toronto from Smithville, Ont. for the concert. 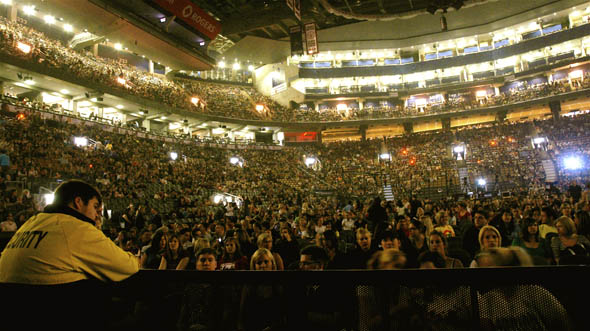 At one point the house lights came on and the ACC reminded me of The Muppet Show, with a crowd full of cute fans, bopping along to the music, as they played their '80s cover of Talk Talk's It's My Life, which they dragged out a tad too long.

Stefani followed that with one of No Doubt's most popular hits, the female empowerment song Just a Girl, injecting more energy into the crowd and herself, starting off the song by doing 10 non-girly push-ups on the stage.

She then engaged the crowd to sing along, but embarrassed "all the Toronto boys" in attendance by having them sing along "I'm just a girl in the world" on their own, to which she responded, "You're shit. Shit! I want my ears to drip blood!" before the girls (who easily comprised two-thirds of the crowd) had their turn to belt out the chorus.

To all the male No Doubt fans in Toronto who missed the show: Why did you stay at home?

The encore had the woman beside me, a 26-year-old No Doubt fan since she was 11, almost extremely disappointed had they not played the ska-influenced Sunday Morning. After Rock Steady, followed by a bare-bones cover version of Adam & the Ants song Stand And Deliver, she got her wish. No doubt about it, they put on a hella good show. 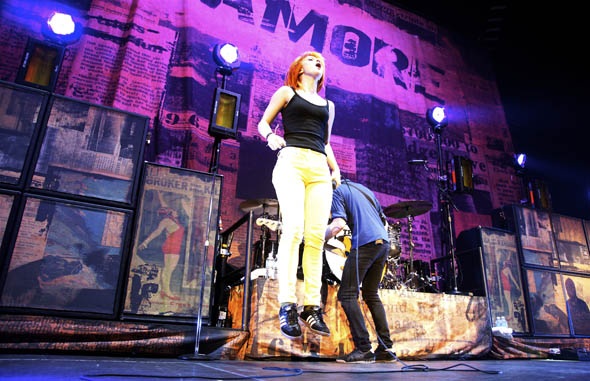 It must be noted that special guests Paramore did an admirable job of warming up the crowd after Bedouin Soundclash's brief set. 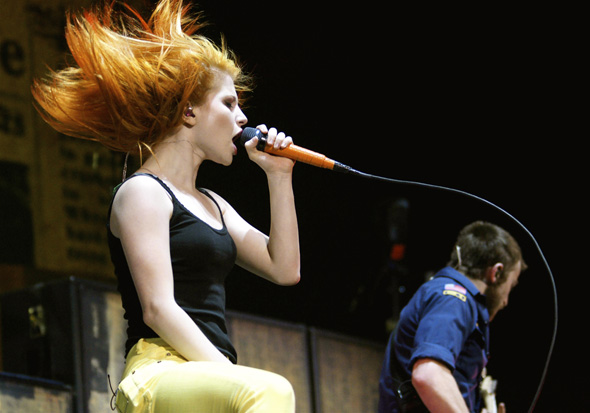 Clearly, many fans in attendance were there for Paramore singer Hayley Williams (pictured above) who cranked it up a notch.

I almost missed it, but their bass player did a backflip over the neck of the guitarist behind Williams, as she shook her bright red mane.

Altogether a truly memorable show. I look forward to No Doubt's next studio album, scheduled for a 2010 release.

Here's some more photos from the concert in this slideshow: