It was 1am at the Bread & Circus when a young group of sweaty exhibitionists, Fashion Tips, took to the stage with their unique brand of comic pop rock.

The festival, in its third year, was sprawled across eight southern Ontario cities over four days. It's always an interesting mix of grassroots talent; freak folk, bubble-gum pop and indie-rock fill out the diverse roster of mostly young artists. This year every show was pay-what-you-can, making it "the most accessible major music festival in the country" (according to their website). The list of Toronto venues this year was certainly creative; a number of shows were held in the kitchen of a Kensington Market house.

I first saw Fashion Tips at The Boat last summer; so far they've been a seasonal band as their lead vocalist, 'Judas Renegade', has been attending University on the east coast during the year (the entire band adopts macho alter-egos for their appearances.)

Half music, half 'Saturday Night Live' comedy routine, Fashion Tips concerts stand apart in the crowded Toronto music scene. Their showmanship, banter, and unbridled energy can be a refreshing change from many young bands who take themselves and their work way too seriously.

The songs are well-crafted, tongue-in-cheek pop ditties; I'd say the Fashion Tips sound lies somewhere between The Bicycles and Guns and Roses. Of course neither of those bands have a song called 'Don't tell the Dean'.

They're recording an E.P. right now and don't have too much of their music on their MySpace page, but this live recording of 'Cute Girls on Bikes' from 2007 should give you an idea of what they're about.

I got a chance to interview Judas after the show in the equipment van.

blogTO: How long has Fashion Tips been together?

blogTO: How long have you been playing music together?

Judas: Well, we're not gay. I believe we are currently in our fifth year now.

blogTO: How would you describe your style of music?

Judas: Well if you take a bit of the party, and a bit of jello, Kodak film and the 'new coke', then you've got a Bill Cosby album and we're nothing like that.

I would say that we are party rock if I was telling my parents, but, uhhh... overall I would say we are more cock rock. (pause) I should reiterate that we're not gay.

blogTO: Do you have a title for your upcoming E.P. yet?

Judas: We're knocking around some titles. 'Victoria Secret vs. Playboy 2'... 'Dinosaur Boner'....'Asstronaut' with the double 's'...

blogTO: How did you get involved in the Pitter Patter festival this year?

Judas: I was trying to look up the lyrics to that Broken Social Scene song, 'Pitter Patter something something'. Then I realized that it's an instrumental song. (pause)

blogTO: That doesn't make any sense.

Judas: Traffic. It's the ability to watch the movie Traffic whenever we want. 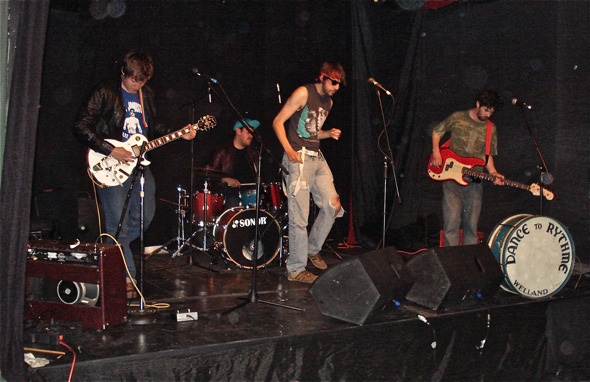