What the 2009 Edgefest suffered with inclement weather it made up for in spirit, as the wet and muddy but energetic crowd proved on Saturday at Downsview Park.

I avoided the late morning rain and got to the park just in time to catch Metric on the main stage at 3 p.m. Emily Haines (pictured below) was in fine form this time. Buoyed by the success of her radio-friendly hits Gimme Sympathy and Help I'm Alive, she got the audience singing along in no time. 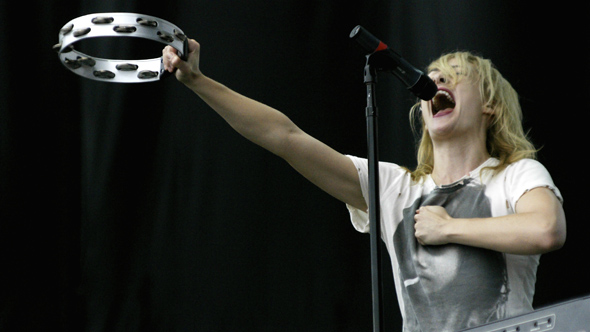 But on the side stage a little later in the afternoon, the Cancer Bats really tore it up with their blend of hardcore, southern metal and punk rock. 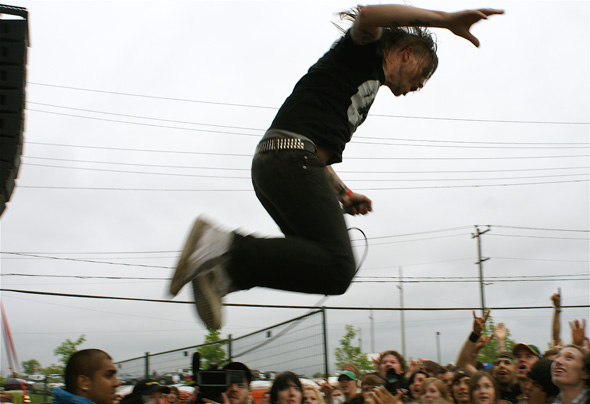 Cancer Bats Lead singer Liam Cormier wasted no time engaging the crowd, launching off the stage and into their outstretched arms. He had the security staff earning their keep for that performance alone. 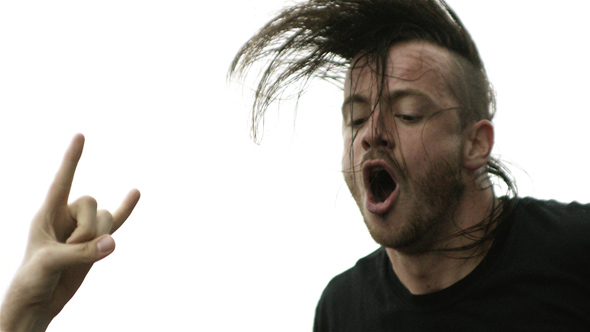 When Edgefest attendees weren't moshing about or lining up at some of the many fast food vendors around the periphery of the park, they were either trying to avoid or embrace the muddy conditions. 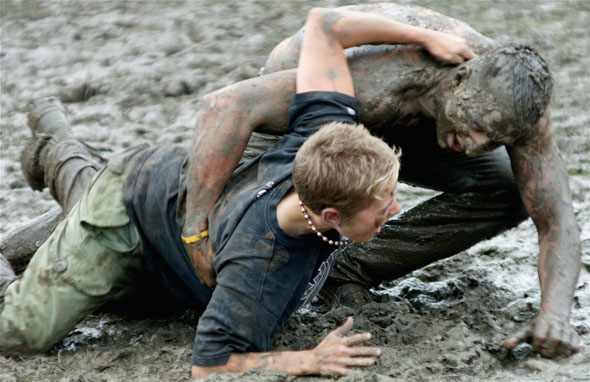 Kudos to this couple who clearly were on the embracing side of the mudfest. 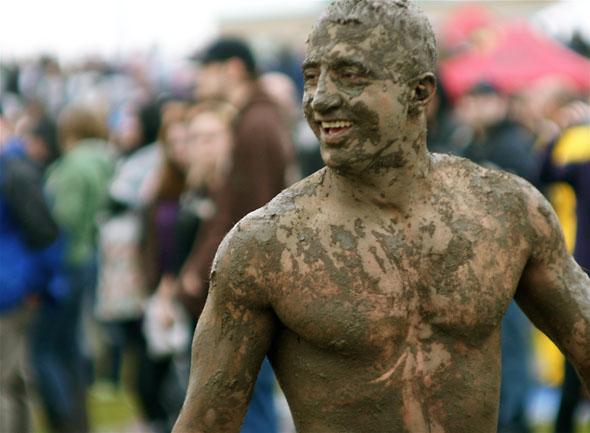 Wellies were the footwear of choice, although I spotted several flip-flop unfortunates and Birkenstock bumpkins. 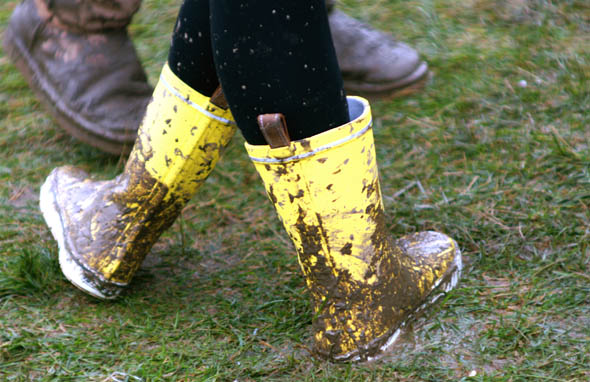 Back at the side stage, Nathan Ferraro was leading his band The Midway State and kept it real, a day before they took home a couple of awards at the MuchMusic Video Awards, for Best Independent Video (for Never Again) and Favourite New Artist. 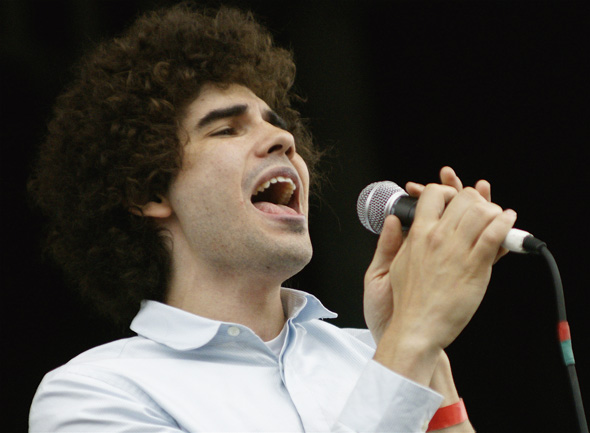 These four ladies managed to keep their Dean and Todd "SHOW ME YOUR GENITALS" white tank tops clean in spite of the mud-flinging going on. 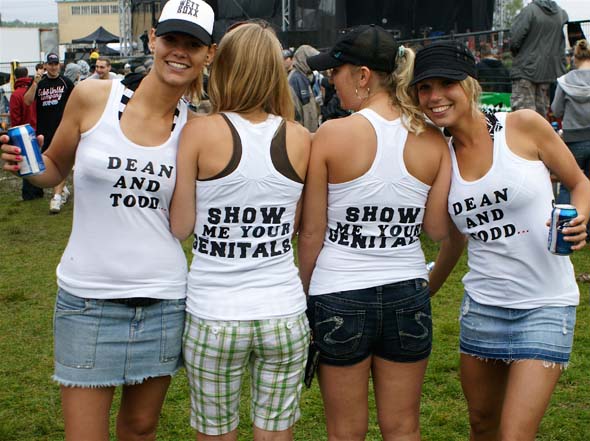 There were a few casualties typical of a festival like this, with all the excitement, crowding around the stages and less-than-ideal weather. All in all, most of the festival attendees kept their spirits high. 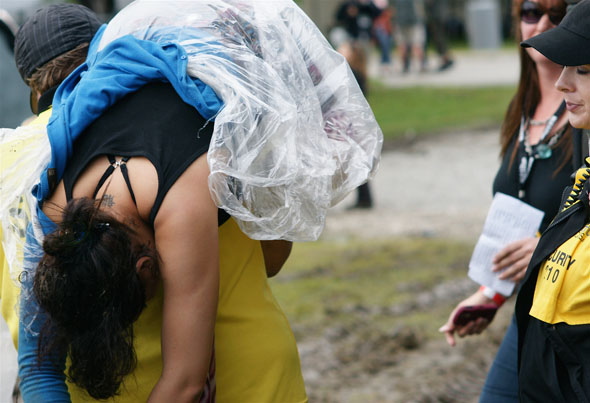 Fellow blogTO writer Joe Zabukovec caught the earlier part of Edgefest, missing out on Alexisonfire and headliners Billy Talent. But that didn't get him down, because bands like The Arkells and The Stills made him feel that it was completely worth the TTC ride to Downsview Park. He also counted on being drenched from head to toe.

Here's a little more of Joe's experience at Edgefest:

The first band that I caught on the small stage, was Still Life Still, the newest addition to the Arts and Crafts label. It was raining and I don't think the audience was as into these East Yorkers as much as me. It's also one of the hazards of being an earlier band at a large showcase like this. But the boys looked like they enjoyed themselves and it was nice to see them on stage at this year's Edgefest.

Then I dipped over to see The Arkells open up the main stage. I've seen them a lot this past year. Probably enough to start creeping out a few of the band members. I know that Dan Griffin (keyboards) is taking notice of me and is probably concerned. I can't help it, they play a great show every time. And as a bonus, they stopped the rain.

Next it was back to the smaller stage to check out Dinosaur Bones. It had started misting, which wasn't so bad. It's like how I'd imagine seeing a band play beside Niagara Falls. This was my first time seeing these locals and I wasn't disappointed. Despite a minor technical glitch with the keyboards, they definitely had the audience moving. 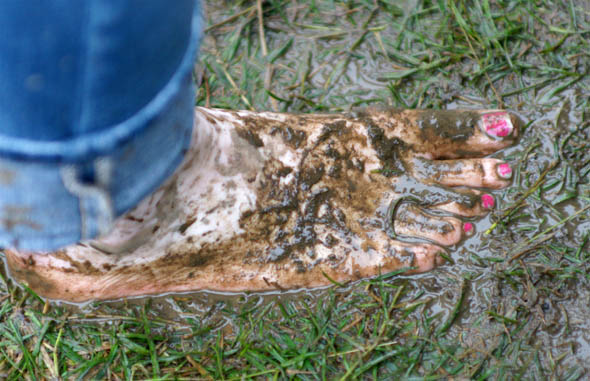 Then Mother Nature became angry. I don't know who pissed her off, or what she has against The Stills, but it started raining again. I wanted to stay in the media tent but I couldn't. The Stills are becoming one of my favourite bands and I've never seen them live. The audience was still pumped from The Arkells and a lot of joints were being passed around. Nowit started to feel like Edgefest.

Unfortunately I had to leave at this point, but I really hope that everyone else stayed.

When I was 15 years old, I attended an Edgefest. It poured and thunder stormed, but it was incredible. I remember moshing to Silverchair, whom I loved, and the steam from the pit kept us warm. The next I day I had to leave for a family vacation and developed pneumonia from the overexposure to the cold, wet weather from the previous day. Worth every second in the rain. I wouldn't take it back for anything. 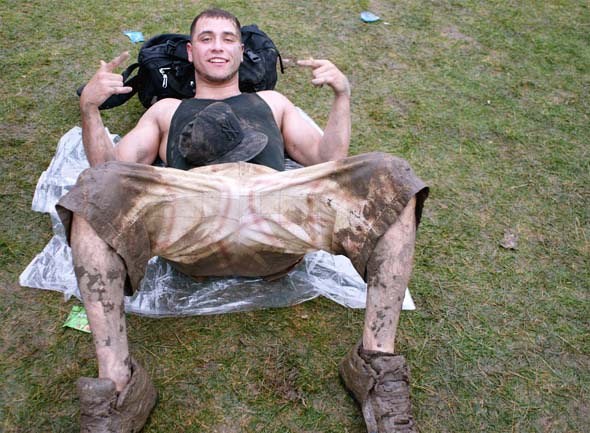 With written input from Joe Zabukovec.
Photos by Roger Cullman.