Melanie Doane Sings To Her Songbook

Melanie Doane and the Art of Time Ensemble (AoTE) collaborated for Songbook 3, an evening of music at Harbourfront Centre's Enwave Theatre for their final concert for its 2008/09 season.

The concept of Songbook is simple: Take a Canadian singer and let 'em choose 12 of their favourite songs to cover, accompanied by a top-notch six-piece musical ensemble, with a few classical pieces thrown in for good measure.

Previous Songbook programs have included Steven Page of Barenaked Ladies and Sarah Slean. I felt that this evening's program didn't quite live up to the standards set by previous outings.

I really wanted to get into this program, but I felt a disconnect between the singer and the audience, as Doane relied much too heavily on the sheet music most of the night. It was as if she was singing to the music stand, not the audience. The music sounded wonderful for the most part. Perhaps a better-rehearsed or more passionate performance would have won me over. 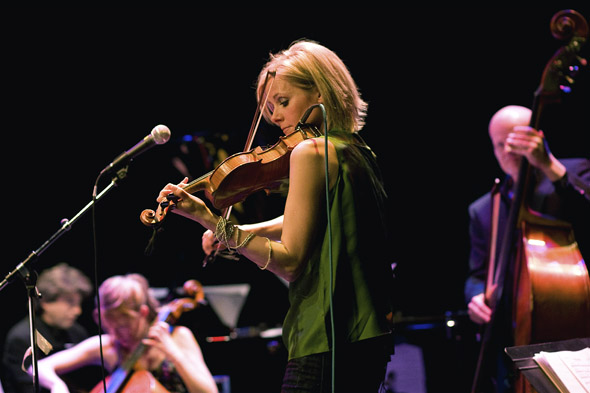 The program started out with Kim Mitchell's Patio Lanterns. Doane's interpretation was somewhat subdued. I was waiting for her to really belt out the chorus, but that didn't happen. She didn't even change the gender to make her singing the song make sense ("I was a nervous boy...").

It was almost as if she was the singer at Live Band Karaoke, reading from a sheet of lyrics of a band she wanted to cover.

One of the highlights for me was hearing her cover fellow Haligonian Joel Plaskett's Love This Town. When Doane covered Stan Rogers' Lies, I felt she finally sung more to the audience. Still, I longed to see the singer move across the stage, rather than remained perched atop the tall stool or stand in front of it.

For one tune she actually picked up a fiddle and gave us a spirited rendition of a piece by Don Messer.

Before intermission we got to hear a trio of piano, cello and violin play Old Photographsby Christos Hatzis under a rather dimly lit stage. First piece after the break was an excerpt from Divisadero by Michael Ondaatje, done as a reading with musical accompaniment, which seemed rather out of place among the evening's selections. Then Doane took to the stage again, turning it down a notch with a morose version of "What'll I do?" by Irving Berlin, eerily arranged by Jonathan Goldsmith.

Rounding out the program were songs by Randy Newman (You've Got a Friend In Me from Toy Story), Tom Waits (Grapefruit Moon) and April Wine (Say Hello). Unless I'm mistaken, there was also no Leonard Cohen song in the set, as was indicated in the evening's program, which only led to further disappointment.

The arrangements were well put together. It was more of a treat to see George Koller enjoying his bass lines or Amy Laing on the cello. Most of the rest of the AoTE seemed to be either still grasping the material, eyes glued to the sheet music, or otherwise disengaged. Especially Doane, the star of the night.

Next season's program looks much more promising, starting with Abbey Road on September 26 and 27, marking the 40th anniversary of the release of The Beatles' album. The program consists of the entire album reimagined, reinvented and performed by artists including Raine Maida, Andy Maize, Steven Page and Sarah Slean. Now that's more like it.

The next Songbook night isn't until this time next year. It will feature cult heroine Mary Margaret O'Hara performing an eclectic set of her favourite songs, including original material and covers by Duke Ellington, Marvin Gaye, Stompin' Tom Connors and others. All given the AoTE's innovative arrangement and treatment.