Popular UK music magazine NME is presenting a large North American club tour promoting two young UK bands: major label Joy Division incarnates White Lies and indie dance sensations Friendly Fires. Both are promoting debut albums and both are influenced in part by the 80's. At Lee's Palace Tuesday night though, I found out that the similarities end there. 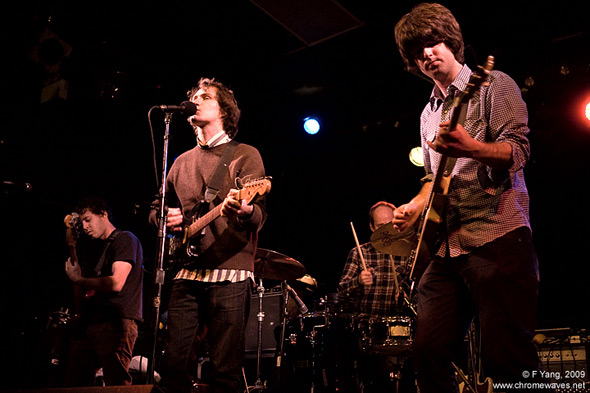 This is a picture of The Soft Pack from San Diego. They were the opening band. I missed them - my bad. Check them out online. I liked what I heard. 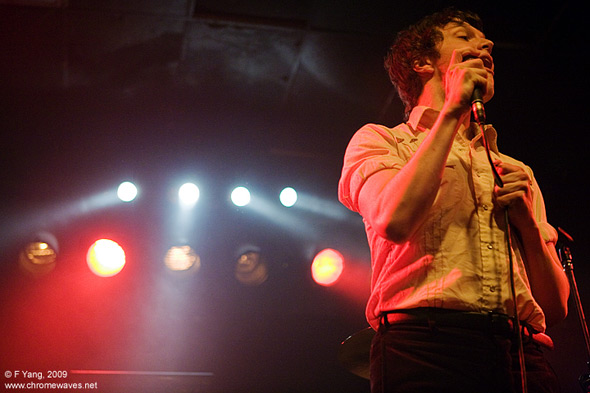 The highlight of the night was definitely the passionate vocals of this man - Ed Macfarlane of Friendly Fires. I bought their album a few months ago and it's been on repeat ever since. I knew there were three guys in the band and was wondering how their amazing retro 80's/post-punk sound would translate live. With the help of a fourth bloke on percussion and bass, it worked fantastically well. Ed is a proper frontman - gripping the mic like it's a part of his hand and living every word of his songs like he's writing them on the spot. I was floored by the band's passion. Their set ended with a 3-minute freak-out after their song "Ex Lover" where Ed got jumped up on the PA speakers to get a better look at the sell out crowd that was ferociously applauding him.

White Lies were "good". A lot of people were clearly there just to see them though - I'll give them that. They brought more crew and custom lights than Friendly Fires but the band was not nearly as into their own music as Friendly Fires were. Maybe because a lot of their songs sound the same? "Unfinished Business" and "Death" are really good songs. All the songs in their set with a 4/4 groove were solid but their other songs that are more "rock" fell flat after seeing a band like Friendly Fires electrify the room.

Because White Lies are on a major label I get why NME made them the headliner, but I think they're destined to be a one-hit wonder whereas Friendly Fires I feel are only going to get better and more exciting. With that in mind, the package deal would have been more rewarding for all if the band order was reversed.