I've been laid up with the flu since last week. (No, not that flu.) I'd avoided it all season, but my number finally came up just a day or two before I was supposed to see Bell Orchestre performing at the Courthouse downtown. I went anyway, so if anyone else at that show is feeling like crap this week, you can blame it on me. And possibly that sneezing little baby on the streetcar last Tuesday.

Members of Bell Orchestre include Richard Reed Parry on upright bass, Sarah Neufeld on violin, Pietro Amato on French horn (all of Arcade Fire fame), Stephan Schneider on percussion, Mike Feuerstack on lap steel, and Kaveh Nabatian on trumpet. The band formed in 2002, toured with Arcade Fire, did a residency at the Banff Centre, and released their first full album, Recording a Tape the Colour of the Light, in 2005.

Bell Orchestre is more than just chamber-pop. Their compositions swell and recede, sometimes exploding into storm-like ferocity. As Seen Through Windows, the second and newest album, is a prime example of the heights this band is able to reach. Hints of abstraction launch the nine instrumental tracks into something collectively experimental and epic.

Back to Friday night's performance: I tucked myself up into a balcony and away from the crowd with a few glasses of water and some tissues and waited for the awesomeness to begin. Standing a few feet behind me were three very loud people who insisted on gabbing throughout the entire show. I don't get that - why spend money on show tickets if you're just there to drink and chat with your friends? Can't you do that in a pub?

The band, however, made up for all of it with a compelling live show. At one point, the two horn players conspired together for a second, and then hopped off the stage and forged a path through the crowd, where they continued to play for the duration of the song. 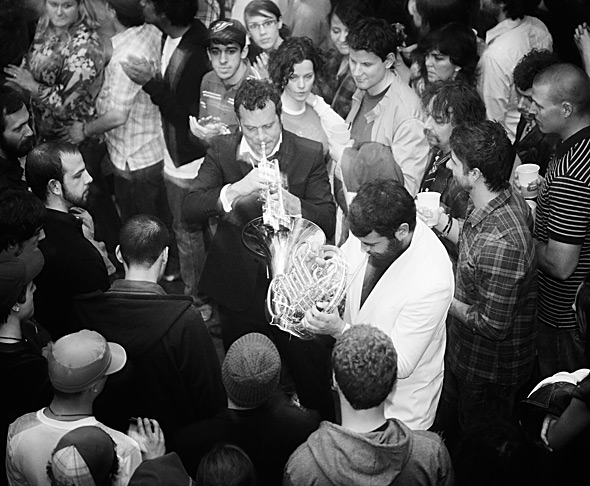 I can't remember all of the names of of the songs they performed, but I think I picked out Icicles/Bicycles and the title track from the new album. (Oh, for bands that post their set lists online. That, and I need to take more notes.) The audience on the main level were into the performance big time - no loudmouths from what I could see. The venue itself seemed maybe just a little too fancy, a little too reminiscent of a night club, but the lighting was beautiful, and acoustics spot-on, so I can't really complain. By the time I got home, I felt a thousand times better.

And for that, Bell Orchestre, I owe you one. 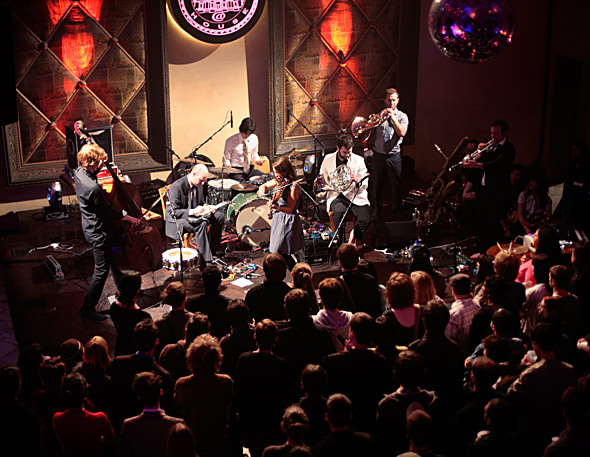