Eagles of Death Metal Rockin' the Back of a Van

It's not everyday I get to meet someone like Jesse 'Boots Electric' Hughes. Sporting a rock star mustache and tight pants, I watched him being interviewed by a couple of Toronto media outlets before the sold out Eagles of Death Metal show last week at the Phoenix. Joshua Homme (Queens of the Stone Age) was absent from the tour, and Jesse got to soak up the entire spotlight - which suits him just fine.

But when it came my turn to interview the Southern party animal, I was told to meet him downstairs in the back of a waiting van; we were going on a little field trip to the Puma store. Of course I was pretty psyched to rock the back of a van with the Eagles of Death Metal front man... but really had no idea what I was getting into.

So Jesse... I last saw you in Toronto at V-fest. You guys were pretty ripped... do you remember that? It was a good show...

How'd you travel? Did Branson hook you up with a VIP ferry?

Yeah, it was Elton John, you could just swim on his back.

So what's it like being back here? Do you hate the cold?

No never... I'm from the dessert, and I love the cold... I just love it when it's somewhere else. Like not near me... near my enemies. Oh, but the cold doesn't bother me here because it's cold everywhere. I love this fuckin' place.

What are you guys doing here, other than playing the gig?

I'm being treated for full-blown radness... (wink to his manager)

So this Puma store trip is your only excursion in Toronto? You going to get any food or anything?

I don't eat; I just take cocaine. It's all I do... (stern glare from his manager)

No wonder you look so good...

It's just the cocaine; I use L'Oreal cocaine...

Is that also why we're going up to Yorkville? Not a bad place to score that...

Well I talked to your manager (Louis, btw, sitting shotgun). I guess that's the logic eh? So, In terms of the album, Heart On, is this a big album for you? Would you say it's bigger than the last album for EODM?

Good to know... actually, I've seen you on stage with not that many clothes on, so I'm kind of aware. Vfest... I asked if you remembered it!

Open and shut? When you come on stage, are you ripped n' ready to go?

I'm gonna have a full erection when I walk on stage... I'm going to have a powerful erection, lasting 4 hours or longer. I may have to go to the hospital.

Are you saying you don't have one right now?

I have a giant erection right now... well, it's more of a boner right now. ...I am clearly, honestly flirting with you.

Yeah I texted my friend before I jumped into the back of the van to interview you... just in case I don't come back.

Well, I'm a rocker baby. I'm a musician. I'm not even that good.... at the instrument. But other things!

I think you have to be good at both of those things to be a rocker, right?

You and I could learn this together, baby... we could jam.

To be honest, I'm an inexperienced rocker.. I barely play rockband. In terms of the show, different line up (no Joshua Homme) - are we seeing anything crazy or different from you guys?

Touring with Joey has turned into a unit that is... I've never ever thought the band could be this before. It's not a joke.

How did you go about filling the role of drums? Josh is sort of an original band member... Did you already have someone in mind to replace him?

I've always wanted Joey (Castillo). Always. Joey's one of my best friends. I don't tour with anyone that isn't my friend.

That's probably why you guys have such fun on tour...

Yeah we have fun on tour, and it's the reason why many good things that have happened to this band happen. But certain types don't understand that, and they will often try to interfere.

And you've got to be loyal to something. If you set up your whole life so that you don't have to feel guilty about being a dick? Then you're fucked. I don't; I like to set constraints for myself.

Is that a definitive part of the band?

I feel like, and not to compare Queens of the Stone Age to Eagles of Death Metal... but people have a different association with the two bands. Eagles seem a bit... cooler?

That's because we're friends... that's not something new. On the Beatles White album it's Eric Clapton playing the guitar on 'My Guitar Gently Weeps', it's Dave Mason and Jimi Hendrix.... we all hang out. You're only as good as the people you surround yourself with. There's just a LOT of people who suck these days! So you need to be more discriminatory of who you hang out with. I have no problem with discrimination; I believe it's necessary.

Especially if you're going to set any kind of standard...

Nobody wants standards. They want to believe that everybody can be a star, and that's bullshit. Only stars can be stars; light bulbs can just twinkle.

I guess you're lucky if your friends happen to be incredibly talented and stars.

Well, I guess they're lucky...

Lucky to work with you?

They're very lucky to find a diamond that was already cut.... I like that one, dude. Quote me baby. 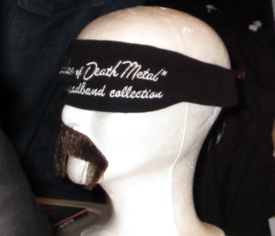 So in terms of the mustache look - is everyone in the band sporting that too? Or are you just trying to encourage the audience to look like you. (See official tour stick-on mustaches pictured right)

It's what anybody with good taste would have.

Yes, I can't grow one but if I was a guy I totally would. The mustache look doesn't really go with the girls so much.

But they do please the girls, you know what I'm saying... that's the whole plot of my game on you right now, baby.

And it's the theme of the tour, right? And of this interview... mustache ride in the back of a van.

So if you were just hanging out in Toronto tonight, what would you be doing?

Well I have a bunch of friends up here... but I'd want to spend at least a month here, and get to know a couple bars, then I'd probably get to feel out which bar's my favourite... because eventually all circles rub up against each other.

Do your friends come out to your Toronto shows?

It's hard to say no to the fun show, baby.

Yeah but you know what, dudes who want to tag team a chick... it's kind of weird. Who wants to have sex with anyone while looking at their buddy's face?

Well it's quite a different position from the one you're in right now.

Well there's 3 ladies (me and two publicists) in this car... it's more of a tag team on you.

That could be kind of hot. I'm just curious...

You did look pretty interested when I said that. So we're going to the Puma store... why?

Because I work out, baby! There is nothing more sexual than workout clothes... every hot woman in a Puma outfit is ready to get down. They're running to do it! And besides, Puma's kind of like a cougar...

Are you implying that I'm a cougar? Wait a minute...

So what's planned after these last few show dates?

Yeah after we finish the Toronto show tonight, I've got some diversion going for your boyfriend... and he's going to be taken out of the dressing room on some shit that he's really going to be so stoked about. He's going to be so like 'Yes! Babe I gotta go do this!' And then suddenly you'll be there with me, and I'll be like what's up?

And that's when the magic'll happen... I gotta tell you, for EODM shows I feel like the crowd's got to be a little bit...

Well, I was going to say a little bit drunk, but naked maybe will follow... that sometimes does.

And then we arrived at the Puma store for some rockstar grade shopping... in other words, buying anything that strikes your fancy, and picking up a spare for your girlfriend, kids, friends, etc. Bright yellow kicks and dark leather jackets were the order for the day.

I can't say I feel that I know much more about the music than I did before jumping into this crazy interview, but Jesse's definitely got the rock star persona down pat. It's also hard not to fall for his Southern charms - and I'm sure I'm not the only girl who got treated to a flirtatious interview; however I was the only one lucky enough to rock it in the back of a van which surely makes me special.

The show itself was, as always, completely off the scale. The guitar was cranked and crystal clear, and Joey on drums was clearly an excellent substitute for Homme as he flew through the riffs with sweaty ease. The Phoenix barely contained the crowd, and Jesse commented on how crazy it was to see a fight break out and get resolved within one song... guess it's just the way we roll in Toronto!

Although the vocals always come off muted at their shows, the real draw for EODM is the Southern rock peeling off the Maton and Normandy guitars.... definitely worth checking out on the new album 'Heart On' and something not to miss when they next roll in to town.