What's In The Box: Night Four Keeps It Going

So, it's Monday night and I've officially missed the weekend. But five bucks for five bands is too good of an offer to pass up, so it's off to the Drake Hotel to check out what Roger and Gary have clearly enjoyed.

I'm not really sure what time to show up, but I have been informed that the weekend was packed solid with talent and people and I'd be doing myself a favour to arrive early. I get there in time to catch the first band: The Elwins. 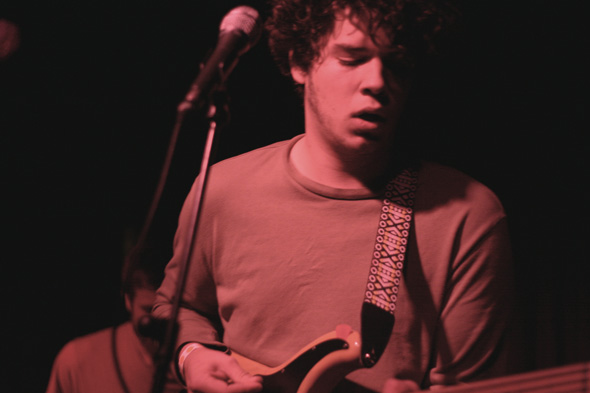 I'm not going to pretend that they stole the show, but they definitely got things going and by the time they were done the place was full -not capacity, but full. I saw people being turned away at 11:30, so that was probably around the time that the Drake Underground reached their legal limit

Helpful Hint #1: I know it's Tuesday, but yesterday was Monday and the Drake was rammed. Get there by 11pm.

The next band was Hooded Fang. They were fun group to see live. I had listened to them online and wasn't sure if I was going to enjoy them, but as it turned out I had nothing to worry about. They were switching instruments, inviting former members up from the audience to play, and genuinely enjoying themselves. Bonus points for using a trombone.

But neither of the first two bands prepared anyone for the Brides. It was the equivalent of being kicked square in the balls with good hard rock. They woke me up, got me moving, and definitely stole the show that night. I could have used a little more vocals, but that's not me complaining. At all. When there's a chance that you could see a band like the Brides, then five dollars is nothing.

My Helpful Hint #3 is to go tonight. I know it's Tuesday and NYE is tomorrow, but just go and see What's In The Box.