There's an old Taoist myth about a chef whose knife never became dull no matter how much meat he carved. His blade wasn't magic, not even a little bit - that was not his trick. Simply put, this old chef was so skillful that his knife effortlessly found the places between the bones, and so he never had to sharpen it at all.

Neil Young is like that. Dude just plain rocks out. 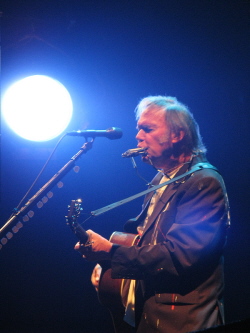 There's not much you can tell a guy like Young about his craft - what he does more or less defines everything that it could be compared with today. And there's not a lot I would want to change about his massive gig at the ACC Friday night.

I came into the space just as Everest was closing off, and since I didn't know them to begin with I'm still without strong opinions. Wilco stepped up as second opener, and while I'm not a huge fan, they engaged the generation-jumping audience, and had a nice rotation of contest-winning drummers.

Until Friday night I hadn't been to the ACC in a while, and when Young came on I was reminded of just how big the place is. It's really big, and it was really full, and that crowd could shout.

Young didn't leave us a lot of time to get comfortable - right away he dropped "Out of the Blue" and a great rendition of "Cortez the Killer," which I hadn't appreciated till then. I thought the show dipped a bit when he started in on "Heart of Gold," but, really, it seemed like I was the only one thinking that. In this critic's opinion, he has songs that are lyrically stronger. When he got to "The Needle and the Damage Done" I thought he was at his best.

Here's something though: what kind of lame Torontonian glazes over during "Cowgirl in the Sand," but stands up and foot stomps their way through "Keep on Rocking in the Free World"? Answer: the whole damn audience. L-A-M-E. Seriously, that song is the "Fight for your Right" of Young's ouvre. 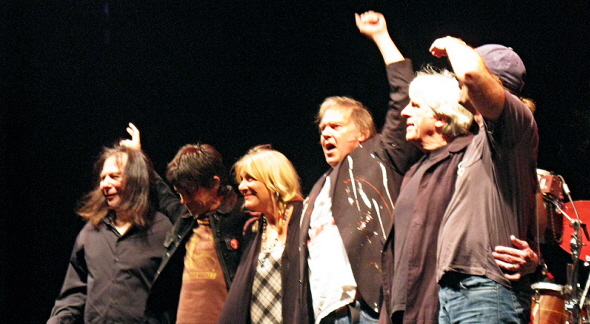 All photos care of the lovely and talented Lisa/inastral.