Duran Duran used to be my favourite band in the early to mid '80s. Nobody could beat their totally awesome music videos and catchy tunes.

Fast-forward 25 years and they're still selling out stadiums, albeit to a mostly older audience, as witnessed last night at the ACC show in Toronto.

I was only 11 years old when Duran Duran's Sing Blue Silver tour came to Toronto's Maple Leaf Gardens, where they recorded the video of The Reflex. My parents thought I was too young to go to a rock concert. Last night's show was full of couples in their 30s, a majority of them groups of aging Duranies. Some even brought their pre-teen kids with them.

Duran Duran still managed to squeeze in a handful of new songs off their 2007 Red Carpet Massacre album, and I was surprised how well received the newer songs were. They had the audience on their feet pretty much throughout the night, which was otherwise a big nostalgia fest. 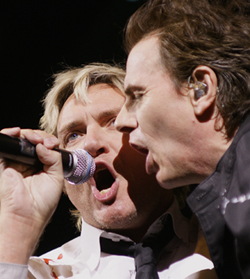 Many of their hits from the '80s still sounded fresh. We got to hear Planet Earth, Hungry Like The Wolf, Save A Prayer, Is There Something I Should Know, The Reflex, Wild Boys, Girls on Film and Rio.

I'm a little disappointed that they didn't play Union of the Snake, or New Moon On Monday or The Chauffeur, but after almost two hours, you can hardly blame them.

Lead singer Simon LeBon (pictured above and to the right with bass player John Taylor) is still a looker, as one fan's banner last night proclaimed: "Simon, you're still sexy at 50."

LeBon was able to keep up his energy throughout the lively two-hour set, although his prancing and posturing moves were somewhat toned down now.

He alluded to that Maple Leaf Garden's gig before launching into The Reflex, asking the crowd if they're in the mood for a little singing. The crowd happily obliged.

When Duran Duran played Wild Boys, one fan who looked to be about 40 got wild and took his shirt off and was flailing about in ecstasy. Until one of the bored security guy made him put his shirt back on. Killjoy! I wonder if they'd have reacted the same had a female fan done the same?

Somewhat out of place on the left of the stage most of the night was Anna Ross, a sole backup singer, dressed in a black PVC suit and heels. Her outfit didn't jive with the rest of the band, making her presence seem right out of The Matrix movie set.

But Ross got her chance to shine during the more recent Duran Duran hits Ordinary World, Come Undone and the Grandmaster Flash cover White Lines where LeBon got the audience really pumped, singing along with "Freeze!" and "Rock!"

The encore saw a bit of a costume change, and LeBon shed his white shirt and tie for a red t-shirt with his name in glittery letters on his back. When their Girls On Film morphed into Papa Was a Rolling Stone, LeBon seemed to overdo his frontman shtick, pausing to ask the audience "Who's your daddy? Who's your fuckin' daddy?" and then pointing his name stitched onto the back of his t-shirt, making me wonder what he consumed backstage.

What '80s pop band would exist without a sax player? Largely relegated to the right of the stage in the shadows for most of the night, and introduced as T. L. F. (for The Ladies' Favourite), it was a treat to hear a live horn in their show. Especially during the final encore, Rio, which left fans cheering for more, but leaving with some fresh careless memories. 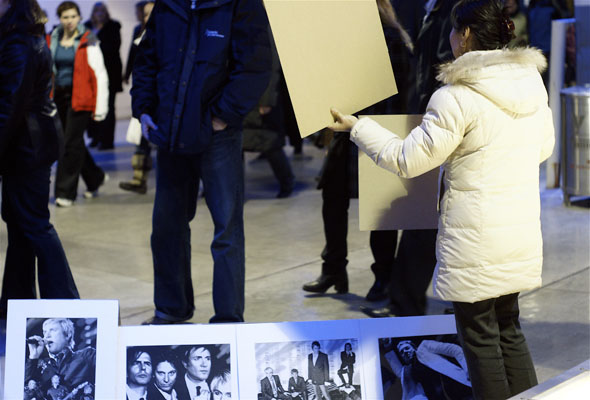 After the show I followed the masses spill out to a corridor that led towards the subway at Union Station. In this corridor was an Asian woman set up with a suitcase full of rip-off prints of the band. For $10 you could bring home a poorly-rendered low-res photo.

I asked a fan who just bought one if she was happy with her new keepsake and she said, "Ten dollars for this is better than forty dollars for the official program."

I hope the band's U.S. management company, Magus Entertainment -- who made all photogs sign the most restrictive photographic release form -- are taking note. It's not the media who's the threat to their livelihood; it's these enterprising exploiters who probably don't know Roger Taylor from Roger Federer.

Any other closet Durannies out there? C'mon, you must've had a photo of LeBon or one of the Taylors up on your junior high school locker door. You may not have splurged $175 for tickets to this show, but you missed a great nostalgia trip.