It seems like just about everybody and their stepmother has something to say about Gregg Gillis of late. I don't want to talk about who he is and what he does because that's been covered elsewhere in prose so sycophantic it's practically syphilitic.

But put me firmly on the other bandwagon: Girl Talk blows. 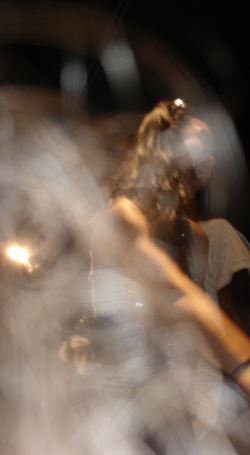 Look, I don't think anybody is going to argue that the vibe on Wednesday night was anything less than expectantly epic. Gillis delivered a stomping-room-only show that sold out a long forever ago. I can force the trip with the best of them, and it was hot, heavy, and sweaty enough for certain kinds of autotrophic archaea to thrive. Kool Haus drew a crowd that was well-dressed and wonderfully, poorly, behaved. I did have to footsie-fight a guy, and I woke up with all kinds of teeth marks on my lips (unrelated to the footsie). There was dancing on the stage, but absolutely fucking everybody was on that stage.

Gillis was eclectic as promised. And he was really, disappointingly, inane.

Point is, solo electronic artists with lots of energy isn't anything new, and the bangingness of the show speaks more to the energy of Torontonians than the quality of the performance. I'm not ragging on the music, which I enjoyed. I will never stand in the this-isn't-music camp, because I've seen sets in France that were just as solid and not as simperingly self-conscious. I hate to get all reductive on the former biomedical engineer turned rebel-without-a-C&D, but if you factor out the gimmicks (affected Electroma masks, the bored Asian chick in a police costume with a TP-blowing machine, the high-concept (?) black-on-both-sides disc on which his latest album dropped, and the "software and computers are the most punk rock thing that's happened, ever") you're basically kicking it at a schizophrenic, throw-back dance party. Which has artistic merit, but there are other places to go if you're into soul-less laptop jockeys. Problem is, I don't like a $20 door charge sold to me as a legitimate live show.