Who's Headlining? Perhaps The Presets

Aussie label mates, The Presets and Cut Copy, teamed up for a show this past Friday at the Sound Academy. It's actually not a bad place to catch a gig, once you make your way down to the darkened environs formerly known as The Docks. It's got great acoustics, open space, and amazing patio with a bar where you can escape if you feel the need.

I got there in time to catch Kordan, a Brooklyn based five-piece outfit who were invited by Cut Copy to open some of the shows on the current North American tour. They seemed an odd fit as openers for acts with a more electronic sound, but the crowd seemed quite receptive.

The place was jammed by the time The Presets hit the stage at around 10pm. It was obvious that a good percentage of those in attendance were there to catch them as much, if not more than, Cut Copy (although tickets were printed with no mention of The Presets on the stubs).

Electronic/dance acts often struggle with how to present their live performances without appearing as computer programmers, but a good light show and a couple of dance steps away from the keyboards kept everyone bopping. The band actually sold more records in their home country last year than both Madonna and Mariah Carey. It's amazing how the internet can help propel otherwise independent bands to a whole different level, catering to a diverse audience. 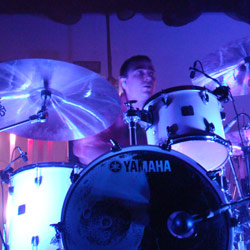 Chatting with The Presets' Kim Moyes before the show, he had no problems correcting me when I identified them as an electronic outfit. "We consider ourselves to be a pop group," he ascertained. I asked about the distinctly 80's sound within some of their tunes, and learned of their admiration for such bands as the Eurythmics and Pet Shop Boys. We talked briefly about the several remixes kicking around on the web, many of them available as free downloads. Moyes thinks it's a great way to get their material out there, and his personal favourite remix is the Mouse on Mars bent-acid version of My People.

When asked about one of his most memorable touring experiences he cites two: Exit Festival in Serbia, and Folsom Street Fair in San Francisco. "It was kind of strange hearing our music blasting out of pubs in Serbia, where we didn't even know we had a following," he remarks. "We played Folsom Street Fair last year and they loved us so much that we were asked back to play again this year. It can be very distracting playing to an audience of mostly gay men all dressed in leather," he laughs.

Cut Copy took the stage before midnight and played a tight show. It was nice hearing guitars after the dancing beats of the 'pop' sensations before them. The stage show was basically the same, but no one seemed to notice or care. Playing a good one hour set that included all of their hits and most of their new material, the sweaty throngs headed for the door - fully satisfied Aussie style.

Writing and photos by Bryen Dunn.