I Furiosi Gets Crazy With Baroque Music

Clad mostly in black leather and PVC, sporting tattoos, a mohawk and black nailpolish, you'd think I Furiosi would be more likely to burst out in some alternative industrial music.

But the quartet of Toronto-area musicians played a spirited show featuring selections by Vivaldi, Handel and some lesser-known composers such as Falconieri, Castello, Cohen and Barkley at the launch party for their latest CD, Crazy at The Gladstone Monday night.

Somewhat like The Art of Time Ensemble, they aim to bring their skill and expertise to new audiences, expanding thier horizons by mixing things up a little. 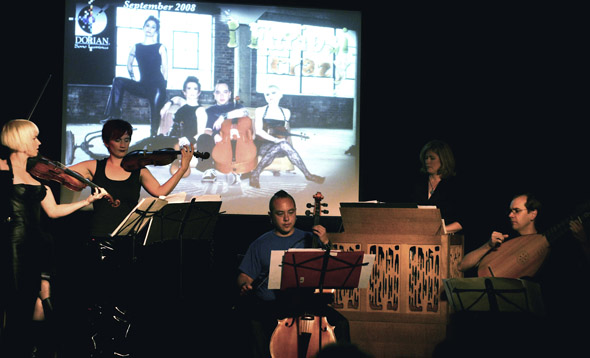 Their dramatically themed productions exploring social themes based on current issues. In this concert, the theme of mental illness was used with insight into historical contexts, reflecting their musicological research and knowledge. 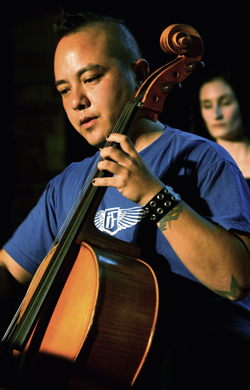 The quartet added a lute and organ (pictured above) for a few numbers. I found it distracting to see a publicity photo of the ensemble projected onto a screen behind the musicians. Given the lively performance and the fancy outfits, they'd be better served by dramatic stage lighting instead.

When I ran into a trio of youngsters clutching I Furiosi's latest CD outside The Gladstone in between sets, they were gushing from the performance. They were all students of Deak's at The Royal Conservatory of Music. It's good to see they made this an all-ages event.

The CD itself is on the Dorian Sono Luminus label, which produces all future releases using recycled products and no longer preprints CD inserts. Instead, they offer printable PDF format booklets with liner notes.

I Furiosi have four more shows this season, featuring a number of guests.

Their next performance on October 4 is titled The T-Word and will include Stephanie Martin on organ and Matthew White on countertenor, exploring the extraordinary roles played by men and women in a time of sexual permissiveness. It will be a concert performed in drag.

It's a pity they're not going to do this show at The Gladstone. I'm sure the regular Gladstone crowd would love it. Then again, this sort of music would probably be better suited to a church.

Other concerts in their 2008/2009 season include themes and titles such as The Heavy Gate, High School Confidential and Decadence.

All concerts will take place at Calvin Presbyterian Church (26 Delisle Ave.) Admission is $20 ($10 students/seniors/underemployed) and only available at the door.