Getting Intimate and Emotional With James

James is back with a vengeance, having brought their '90s guitar pop sensibilities to a passionate, sold out crowd Tuesday night at The Phoenix.

If you're not a big fan of this Manchester, UK group you'll surely know their huge hit Laid from their album by the same name. It still gets radio airplay and pubs hopping after 14 years.

This tour, in support of James' first album in seven years brings them back to form, providing a much needed sing-along quality to songs on the airwaves and iPods of today. And the Toronto crowd didn't stand still, arms crossed the whole time like they're accustomed to. But this wasn't your average band. They knew their stuff and performed like true rock stars that they are.

Right from the first notes of Born of Frustration, it was an incredibly intimate show. Kind of like a jam night with your best friends. Only the house band had some huge, hummable hits in their repertoire. It was also an emotional show, both for the audience and the band, who applauded the crowd after a series of singalongs to some of their more popular songs, including Sometimes and Say Something. 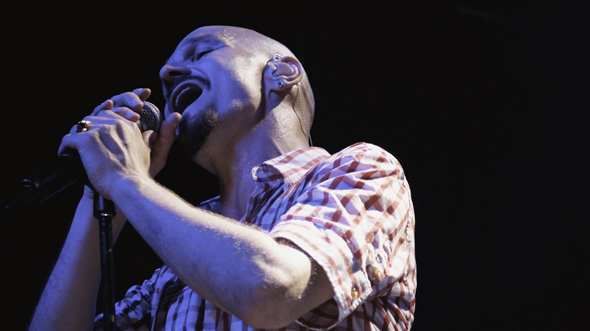 Even the new tunes, including the title track from their latest offering, Hey Ma, with its chorus that goes "Hey Ma, boys in body bags, coming home in pieces" were instantly hummable, in spite of the sociopolitical commentary and had most of the crowd singing along at full volume.

At one point, singer Tim Booth stepped up onto the huge speaker stacks and hopped across onto the barrier in front of the crowd, being held up by one burly fan, who held onto Booth's leg while he balanced and leaned over into the crowd with his microphone, giving the audience a closer glimpse than they had with the chasm of a barrier that existed between the audience and band for the show up until then.

The new songs got surprisingly amazing reception, in spite of virtually nonexistent radio airplay since its release about a week ago. When they played the song entitled Bubbles, someone in the front centre of the crowd blew bubbles up to the stage until one of the bouncers put a stop to that. Can't have bubbles distracting the band now. Flash photography from all the little point-and-shoots seemed to be fine by them though. 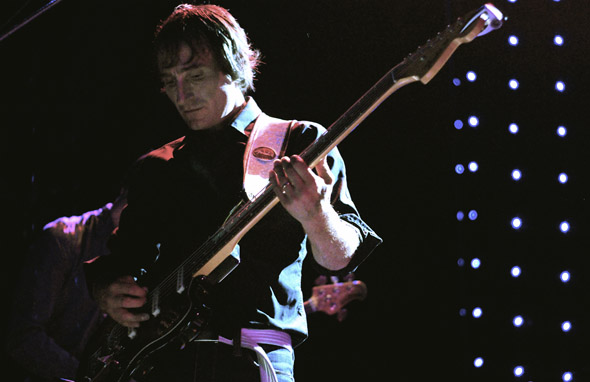 During the underrated Five-O from the Laid album, guitarist Saul Davies (pictured above) picked up his electric fiddle (shaped like an anchor) and seemed to lose himself in the solo while Booth watched in awe and fed off his energy, mouthing "let it go, let it go," to him by the end of the song, which appeared to be quite the catharsis for the two. The band broke up in 2001 and now seems very much like a tightly knit family.

James was genuinely pleased with the audience response to them and completely into the music. You could tell they were there for the love of the music and loved to perform and ensure that everyone had as good a time as they did.

Booth's excited dancing and stage presence throughout the show was infectious. The chorus for "Sometimes" went on for an almost ridiculous five minutes after the band had relinquished the end of song to the crowd. And the band appeared to be awestruck by the seemingly never-ending singalong. James followed up with the ever-popular Laid, which uplifted the crowd even more. 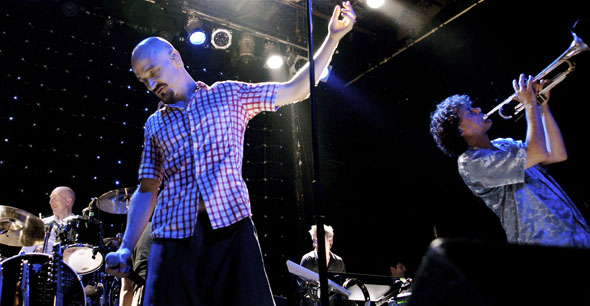 The band returned for a four-song encore, which included the early hit Come Home, after which the band left the stage, once again applauding the adoring audience as they left. Only to return once more to play On Top of the World, which clearly they (and the fans) were by the end of the night.

James vowed to come back to Toronto soon. This is how music was meant to be shared live. Don't miss their next show.

The opening band Unkle Bob from Glasgow, Scotland (pictured below) performed some decent tunes too, including Hit Parade and Put a Record On. If you're a fan of Radiohead or Coldplay, keep an ear out for them, as they've got a lot of potential.

James' touring support acts have had a run of success stories, including The Stone Roses, Nirvana, Radiohead, Third Eye Blind and even Coldplay. 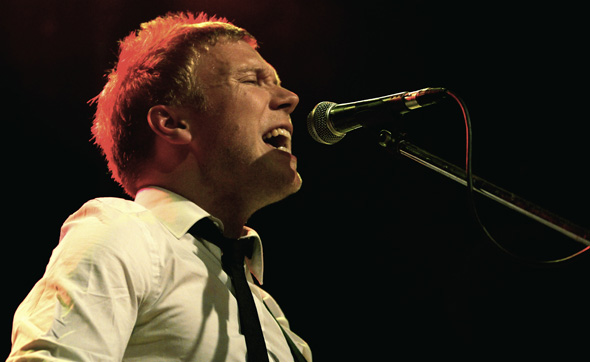