Rancid Heats Up the Kool Haus

Veteran punk band, Rancid played the first of two sold-out shows Saturday night, at the Kool Haus. The venue was packed solid with punks of all ages.

I have been a fan of Rancid since high school, back in the early nineties. I was excited to get to see them play live for the first time, after missing them at various Warped tours. 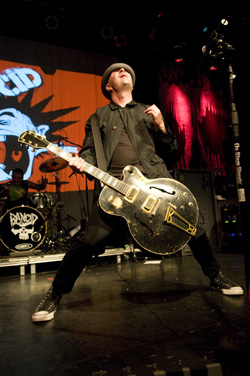 For those that are not aware of Rancid, they are a four piece punk band from Albany, California. Formed in 1991 by Tim Armstrong (lead vocals and guitar) and Matt Freeman (bass), they along with Green Day and The Offspring are credited with bringing punk music to the mainstream, for better or for worse.

The band started out with one of their biggest hits, Ruby Soho, and the crowd went crazy. One of the first things security always tells you at rock/punk shows, when you are down in the press-pit, is watch out for crowd surfers. Within a minute there were bodies falling all around. I almost tripped over one poor surfers lost shoe.

The set list was heavy on the album, ... And Out Come The Wolves, playing almost all of the tracks from it. A slower version of the song, The Wars End, otherwise known as Sammy, was a change of pace with Lars Frederiksen (lead guitar and vocals) getting the crowd to sing along to the chorus. A mix of the other studio albums comprised the rest of the set, with a few surprises being, Knowledge from Tim Armstrong and Matt Freeman's previous band Operation Ivy, and Into Action from Tim's solo album, A Poet's Life.

My only complaint, if you can call it a complaint, was that they were tight to the point they were almost too good and polished for a core punk band. Overall, a great show put on by one of the greatest punk bands of the nineties.