While the Rogers Picnic at Fort York got rained on throughout most of the afternoon and evening, the crowd made the most of it, cheering along 10 bands and half a dozen DJs.

It was a family affair and I was surprised to see so many youngsters. I mean really young. Perched atop his daddy's shoulders was Julien Moise, a 21-month-old, attending his second concert already, albeit wearing his own hearing protectors.

"He came here last year, wearing these," said Julien's father Sebastien. "He even went to the Molson Indy with me wearing them." 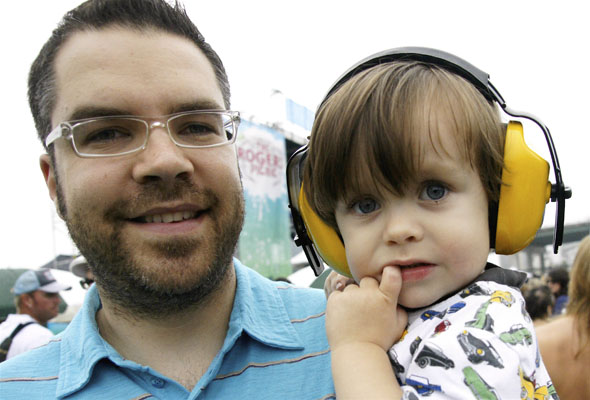 After a lot of huddling under the Nokia Tent to stay out of the rain, it was time to venture out to get a bite. One of the vendors was 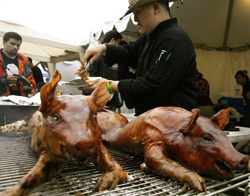 Cluck, Grunt & Low, displaying a couple of pigs on a barbeque. This drew some fierce reactions from passers-by.

"I hate when you can see their faces," commented Michelle Lewis, 21.

But chef Richard Hong didn't seem to mind, offering me a sample of the meat, which I kindly declined. Instead I satisfied myself with a chicken burger at the next stand.

Later on I encounter another youngster wearing ear protection.

This time it's two-year-old Harper Rapkin atop her daddy Jamie's shoulders. "She likes the Animal Collective he assures me. 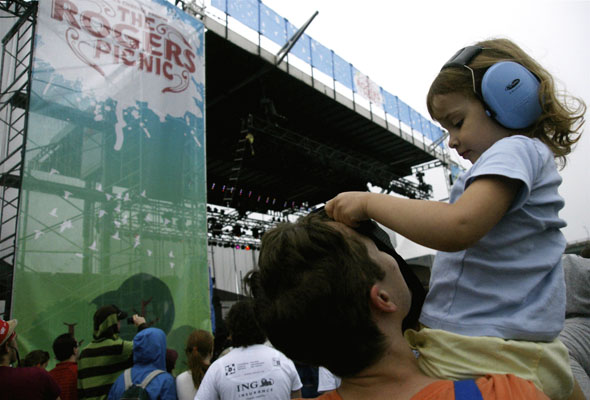 But it's the electro-funk duo of Chromeo who finally gets the crowd going. 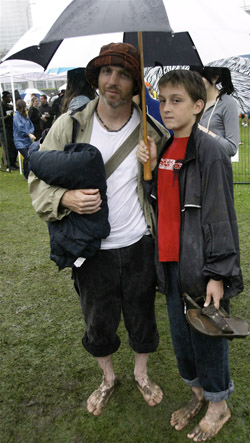 Shouting out into their vocoder, "You're so gangsta, gangsta" and thanking the damp-clothed crowd whose spirits weren't dampened, for staying out in the rain under umbrellas and rain ponchos.

I hear a surge of simultaneous laughter and applause from the older crowd as Chromeo break into a cover of Journey's Don't Stop Believin'.

Another father-son duo came all the way from Sarnia for this one-day festival show. True Hopewood, 11, was taking in his first big rock concert. He and his father Tom were standing barefoot in the rain and mud, watching the show from a fair distance back.

"We're big City and Colour fans. And they had at least three hours to go before their favourite band on the line-up hit the stage. I later saw them collapsed against the fence, huddled under a blanket. That's dedication.

Not everyone came dressed for the weather.

"When it started raining we went to the pork place (Cluck, Grunt & Low) and they gave us four garbage bags for free," explained Goodman. "Later, when it really started to pour, they gave us two more, but charged us $1 each bag and said 'It's capitalism'.

"They made a killing, not off their pork, but on their garbage bags. When we returned to our spot and sat down here we discovered another garbage bag on the ground nearby. We picked it up and used it anyway because, as my friends pointed out, 'baggers' can't be choosers." 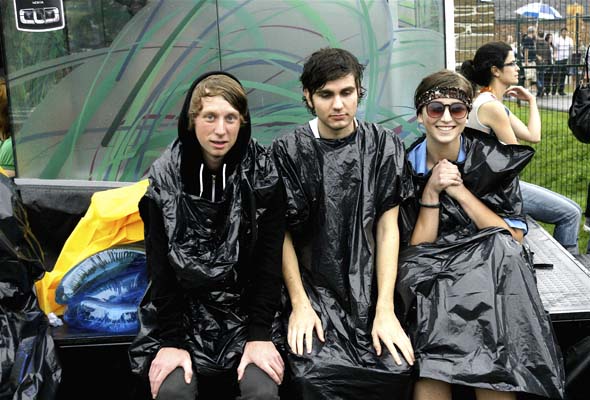 Further back, hanging out against one of the brick walls that circumnavigate Fort York is Laura Higgins, 22, and Josh Levitt, 28, both from Cambridge, Ont. They're keeping cozy under an umbrella, waiting for Cat Power to emerge on the stage later in the evening. 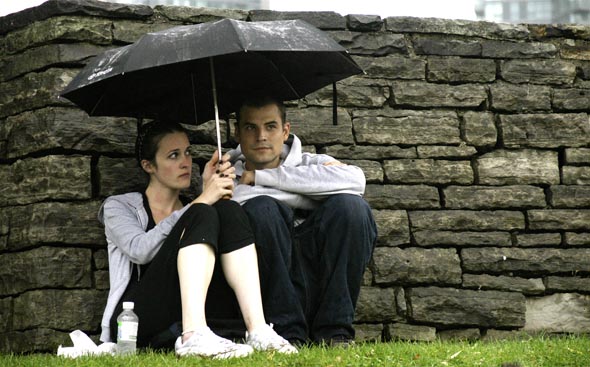 They also came to see Dizzee Rascal and Vampire Weekend. "We got out tickets a couple of weeks ago and didn't know it would be so rainy like this."

Fair enough. The tickets said the concert would go on rain or shine. Perhaps the organizers could've provided a bit more tent coverage in such an event. 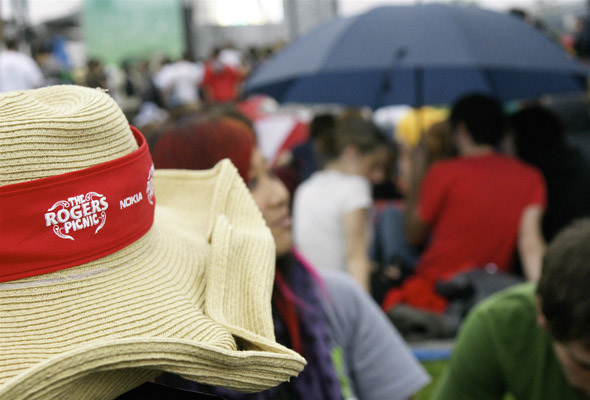 Some, like Annie Hussey, 20 (pictured below) didn't even realize just how muddy the field had become. Dancing in the rain on a field can certainly ruin one's pedicure. I saw many a flip-flop get lodged in the mud by the end of the evening. 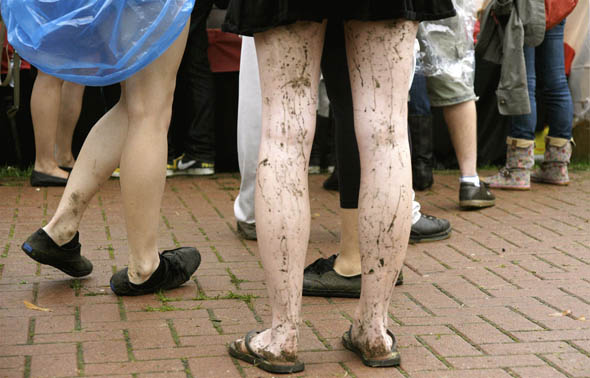 "I had a pedicure yesterday and then my shoe broke today in the mud," says Ashley McEachern, 22 (pictured below) who came for Cat Power after seeing her last year in Ottawa for Bluesfest. 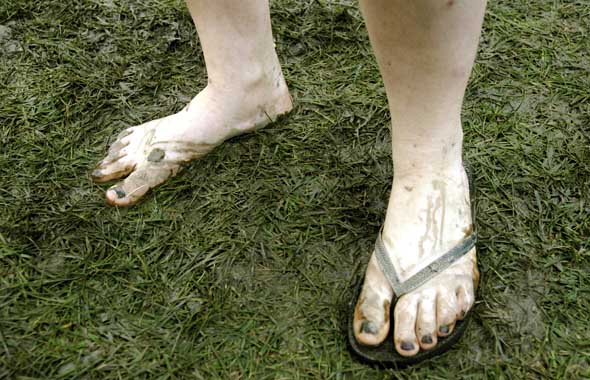 By the time Cat Power's done her set, it's starting to get dark. The large screens on either side of the stage broadcast close-ups of the performers as text messages march across the bottom of the screens, sent in courtesy of Nokia via their booths set up around the venue. 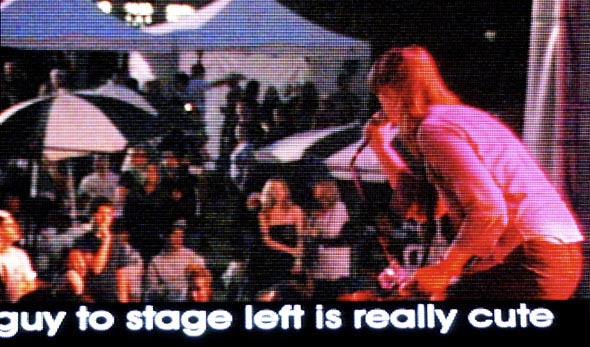 Some of them are quite amusing. One person texted in "The security guy to stage left is really cute."

While it wasn't labeled or advertised necessarily as a family picnic, it was great to see families enjoying the outdoors and the music and the crowd. 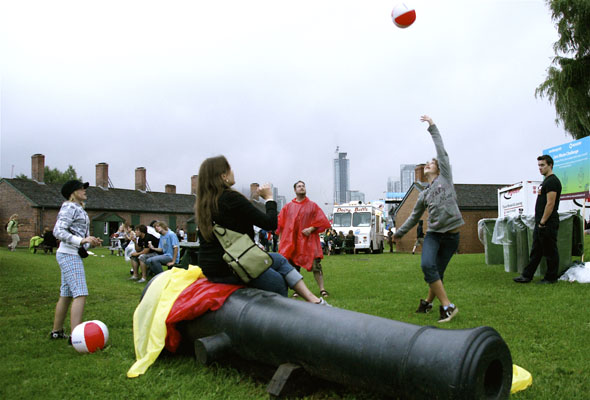 "I like the idea of seeing Canadian bands," says Natasha Kiviranta, who came with her husband DJ Burke, their daughter Lauren, 11 and Sandra Burke-Bishop, their niece (pictured above).

Let's hope Rogers continues this tradition next year. Perhaps the weather will be more cooperative. 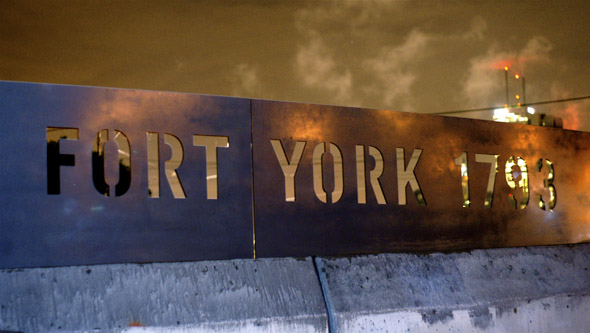 Following is a photo slideshow of the bands who performed at the Rogers Picnic:

Slideshow photos by John Hargraft.
All other photos by Roger Cullman.