The Toronto elimination round of the 2008 DMC DJ Championships, took place on Saturday night. Presented by REMG entertainment, the turntablist showdown was and held as part of the Wakestock Boarder's Bash, at the Sound Academy.

The pairing of the DJ battle, with the Wakestock afterparty didn't mesh so well. It seemed that partygoers were much more interested in the events happening outside at the Polson Pier Cabana - a bikini contest and inflatable gladiator games. When the majority of your attendees are 20 year-old, male, extreme sports enthusiasts; it's hard to get their attention on the DMC competition, which started at 10 o'clock in the mostly empty main room. 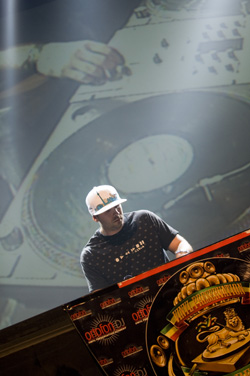 The eight competitors were:

Each DJ had six minutes to impress the judges, a mix of Toronto's Hip Hop movers and shakers, including Now magazine's Addi Stewart, and from CKLN 88.1 FM's, Mix-tape Massacre show, host Bryce Seefieldt (aka Seven30). With two set-ups for the DJs to use, the competition moved along quite quickly.

When the head-to-head battle was finished, the judges only took about twenty minutes to reach their decision. The host for the night, Bozack Morris, called all the DJ's back up to the stage for the results. First place was awarded to DJ T-Lo, second went to DJ Arsenal and third was last year's Toronto champ E-Flip. 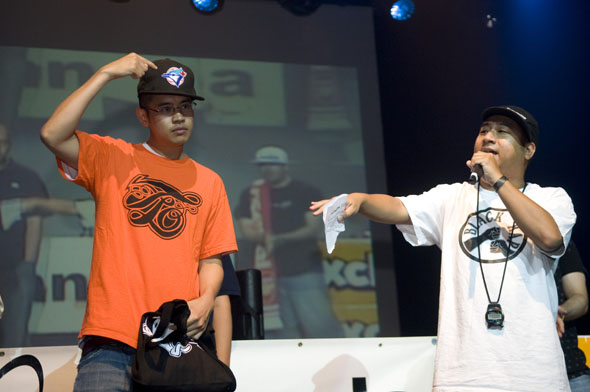 The night started with a sparse crowd, but by the time announcement of the winner rolled around the main room of the massive complex was quite full. Next year I hope this competition can be done as a stand-alone event, as most people there didn't seem to really care about the DJ battle. They were way too interested in following the bikini-clad girls around, to get their photo taken with them.