I decided to kick off NXNE 2008 by going to the Big Bop (651 Queen West @ Bathurst) so I could bounce between Holy Joe's and Reverb to take in as much as I could.

I showed up just in time to catch the first song by Toronto's The Books Elusive upstairs at Holy Joe's. This high energy duo proved to be lots of fun. With Lynne Dubuc on vocals and guitar and Damon de Szegheo on drums and vocals, my first thoughts were of a gender reversed White Stripes, though that's probably oversimplifying things.

To sum them up in just one word, I'd call them proto-minimalist. de Szegheo absolutely pummeled his kit, which is always a lot of fun to see. He switched to mallets to add a gentler touch for one number, but it wasn't long before the rubber tips came flying off. 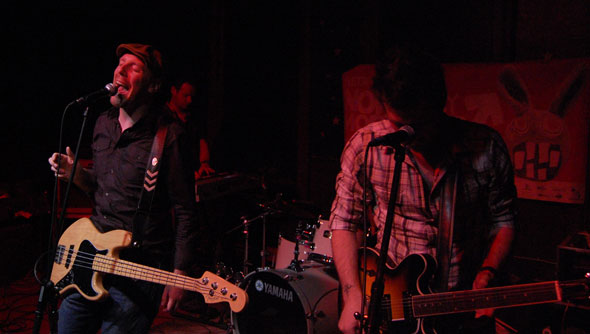 Dublin's Stand performed a kinder, gentler, more radio-friendly set, but after a while the crackle in guitarist Alan Doyle's microphone was bumming me out, so I headed down to Reverb to find a quartet of apparent burn victims onstage. 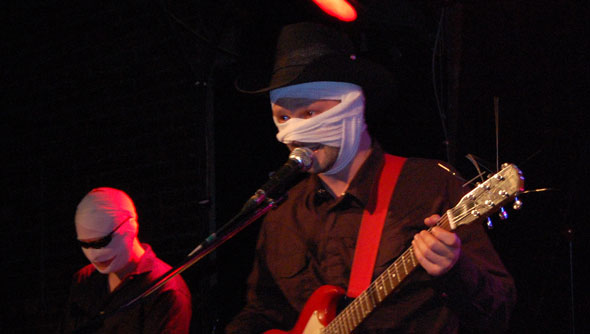 Mad Staring Eyes were bashing out pub rock at its finest. I'm not sure what the bandages were all about, but by the time they belted out set closer "Shiny New Car" I didn't care anymore. As soon as the set was done, they made sure everyone in the room got a free copy of their brand new album, Bored of Looking Cool (which I'm digging right now). It's hot off the presses and hasn't even been added to CDDB yet. 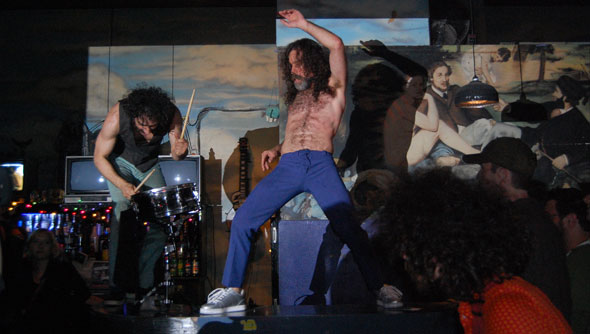 I'd heard that obnoxiously skinny Israeli noise makers Monotonix were a band not to miss, but nothing could have possibly prepared me for what I witnessed last night. The trio setup in the middle of the dance floor and simply let it rip. Spontaneously rearranging the drum kit while the drummer was still playing, stealing beers from the audience, pouring them on his bandmates and defiling onlooking females, the singer/dead ringer for Charles Manson was absolutely electrifying even though I could barely hear him. By the time the band had moved all the way to the back of the room and started playing on top of the bar I was hooked - I didn't understand a note of it, and frankly my dear, I don't give a damn. Hands down, Monotonix is the craziest band I've ever seen, finally making good on the original promise that once was punk. 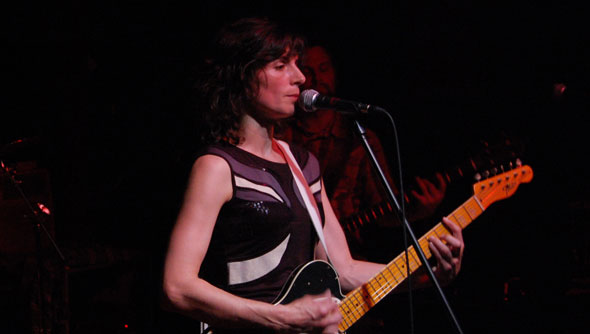 Back upstairs to detox from the debauchery of Monotonix, I caught the last number by Jennifer Foster, which was surprisingly spunky. Maybe some night I can check out a whole set. 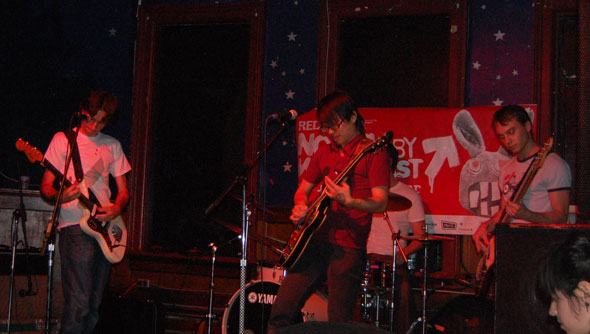 After Ms. Foster left the stage, Montreal's Stop, Theif started playing, but it turned out that the PA problems that plagued Stand were still a force to be reckoned with. The rest of their sound was fairly decent, despite the garbled vocals, and I'll be curious to hear what this young band gets up to after they rack up a little more mileage. 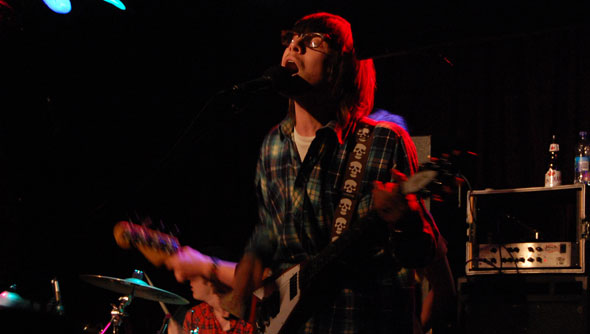 On my way out I snapped a few pics of People in Planes from Wales. They were definitely the most polished, professional and radio-friendly outfit of the night, but they've been getting far too much press lately, so I'm just going to leave it at that. They ran their guitar tech ragged switching axes for almost every song.