It's Thursday night, my first night of North By Northeast (NXNE), I'm heading to The El Mocambo to see The New Odds. Walking along College Street by Rancho Relaxo, I catch an earful of a decent song and head upstairs.

Not far from Chinatown, it's apropos to see a band called Chinese Food. The lead singer (pictured below, right) is givin' er and the crowd is eating it up like post club-night grub at New Ho King.

Down the stairs and round the corner to the ElMo, I get there just in time to see The Kids In the Hall's Dave Foley introduce what he calls "one of the best bands on the planet." 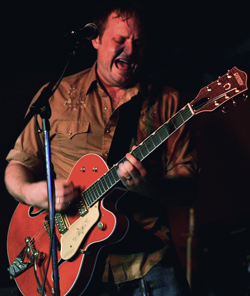 The New Odds take the stage with renewed vigor.

Having a string of early-to-mid-'90s hits with Truth Untold, Eat My Brain, Someone Who's Cool and Heterosexual Man (the video of which featured the band performing in drag with members of The Kids in the Hall), I wonder if they can still deliver.

Well, they're back with a vengeance and, judging by their energetic performance (check out The New Odds' mini photo-slideshow below) they're likely to be around for a while.

I stick around for a while after their set and I'm rewarded with a stellar show by Major Maker, perhaps best known for their Maynards Candy Song, Rollercoaster.

They are far from a one-hit wonder band. Fresh off being named CBC's 2008 Galaxie Rising Stars Award winner, they brought their head-bopping, foot-stomping, feel-good music to a packed crowd.

Icelandic vocalist Lindy Vopnfjord (pictured in the story's top photo) engages the audience and feeds off their energy for a lively 10-song set. Their sound captures the energy of The White Stripes with the vibe of The Stone Roses. Check out their song I'm In Love for some more infectious pop. And be sure to check them out when this local indie band next plays in Toronto.