I had a lot of fun at NXNE this year. I started my Thursday night at the Horseshoe and caught an early set by The Coast. I hadn't seen them live since they released their debut full length Expatriate in April. I liked the new songs live but a few sound issues affected the overall impact of their set. Not the band's fault and unfortunately a very common issue at festivals like NXNE. Most people in the crowd (especially those up front) didn't seem to mind though and the 'Shoe was mostly full for their strong set closer "The Lines Are Cut".

Next I decided to check out the future of Toronto label Last Gang Records. That gang is never afraid to take on new genres and their showcase at Wrongbar proved that. New signings Let's Go To War (Toronto) and Terry Lynn (Kingston, Jamaica) seem to be on opposite points of the current electro hype spectrum though. While Let's Go To War's mediocre live electro/rap show didn't impress those around me, Terry Lynn's intense electro/reggae set seemed cutting edge and worthy of the attention she will soon get. Terry sang and spit socio-political lyrics over contemporary electro-house and dancehall beats. A live guitarist added an interesting flavour on a few tracks, as did a talented hype man who could actually do the job properly. South Rakkas Crew spun amazing sets between the live acts.

Southend, UK post-punk buzz band These New Puritans attracted quite a crowd for their 1am set at the Reverb. An enthusiastic crowd was moshing in front of lead singer Jack Barnett. Yes, that's right - the crowd was moshing, and some were even crowd surfing. I wasn't quite sure what was going on, but it was obvious that the band already has a solid fan base here. Watch out for them to play a sold out Lee's Palace or Opera House show sometime soon.

Although not directly linked to NXNE, popular Halifax band Wintersleep played outside the Best Buy at Bay and Dundas Friday afternoon. Their set included songs off their Juno-winning album Welcome To The Night Sky as well as two brand new songs. It was great seeing a big band play on the street in the middle of the day. The band was really into it as well.

Saturday was a very action-packed day for me. After soaking in the sun at the annual Joao Carvalho Mastering NXNE BBQ (which was an open mic affair that featured performances by the likes of Danielle Duval, Irish band Fred), I went to the Hideout to check out new Toronto band Epigramme. This is lead singer/guitarist C. Browne's latest ambient/alt-rock project that features members of his former band Memory Bank, Steve Puchalski from Deromantic, and Megan Hamilton. Browne has a great voice and although I think this was their first show, it was obvious to me that Epigramme is a band worth keeping an eye on. 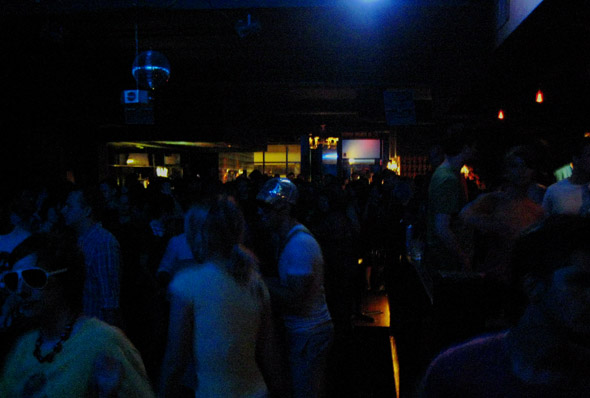 I spent the rest of my (late) night at the DFA Records showcase. This was the party of the year so far in my opinion. Expecting world-class disco sets by Brooklyn DJs Pat Mahoney and Andy Butler of Hercules and Love Affair I knew I was in for something special, but the vibe inside Wrongbar was everything a great party should be. It was insane until after the 4am extended last call. Nasty Nav had the capacity crowd dancing before midnight ("I haven't had that much fun spinning in a long time", he said to me after his set), then Pat and Andy took over with a perfect mix of classic disco and uplifting house. Everyone had a smile on their face - even with the fierce humidity in the room. DO NOT miss these guys when they come back.