Rob Dickinson, former singer of Catherine Wheel, is happy to be back in Toronto for a show tonight with a full band at The Mod Club.

Catherine Wheel was a band from England that had a bunch of hit songs in the '90s which included Black Metallic, Crank, I Want To Touch You and The Nude. Some of these songs have been rerecorded as acoustic versions that are now available as a bonus CD along with his most recent Fresh Wine for the Horses album, which had trouble getting out of the starting gates.

We met this afternoon to talk about going solo and his impressions of Toronto. His speaking voice was much lower than I thought it would be, considering his upper vocal range. "Hopefully it'll be high and girl-like tonight," he joked.

He attributed this to singing almost nonstop since getting into Toronto on Friday to rehearse with a new rhythm section that his friend Darrin Pfeiffer of Goldfinger helped him find. Rounding out the band is Michael Isenstein (formerly of Letters To Cleo) on guitar and Jason Sniderman (from Blue Peter; also son of Sam Sniderman of Sam the Record Man) on keyboards.

Q&A with Dickinson on Toronto audiences, taxi drivers and baristas after the jump.... 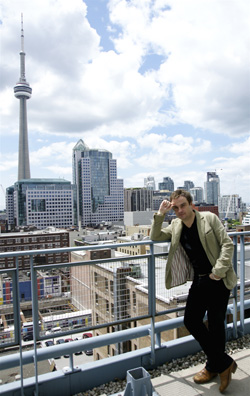 What's your impression of Toronto?

"We first came here in '92, opening for The Charlatans UK at The Opera House. We hadn't been to the U.S. yet, and went straight from Toronto to New York. Toronto was more of a cosmopolitan city than New York. We did our biggest headline show ever here, playing in front of 3,500 fans at The Warehouse back in '96. It was our biggest show ever anywhere."

How do you feel about Toronto audiences?

"Fantastic! I did a solo acoustic show here last February, which got us into this situation with Universal records and we played Lee's Palace to an audience of 500. Toronto audiences are not as self-conscious. They're very natural, very giving. Some audiences, like in London, England, are more aware of themselves than the band."

Would you ever considering living in Toronto?

"I lived in New York for three years and I'm just not an east coast guy. You get this massive, incredibly cold winter and then it's incredibly hot in the summer. I wouldn't mind living here for a few weeks in the spring though."

How is playing solo different from being in Catherine Wheel?

"Performing on my own was out of necessity, and I did it reluctantly. We spent a lot of time on the album and then I was told I'd have to perform with an acoustic guitar. One, you find out how good your songs are and two, you really connect with the audience. It really builds you as an artist, and builds you as a performer."

Whose idea was it to include a bunch of old Catherine Wheel songs, albeit reworked versions, as a bonus CD with your latest album, Fresh Wine for the Horses?

"It was the record company's idea. If we were going to re-release the album, we had to make it worth it to recapture the audience. It happened as a direct result of the Lee's Palace show. If that's what we need to do to release the album, so be it. We picked a small amount of songs and got quite creative with them. It was produced by Greg Collins, who mixed half the last U2 record."

How have those songs evolved for you since they were written? 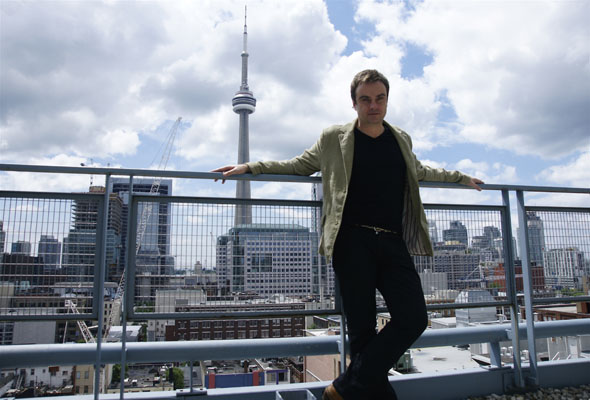 Have you thought of collaborating with your cousin Bruce Dickinson of Iron Maiden?

What was it like touring the U.S. with The Church in July and August 2006?

"It was fascinating. I'd previously met Marty Willson-Piper, who played a guitar solo on my Oceans album. I was opening up with them acoustically. They're like a bickering little family, but they were fun. The Church is a great band, but incredibly volatile. I was welcomed into the fold early on and got to see the dysfunction, the joy and pain. It was probably the most enjoyable six weeks on the road I've ever had. My favourite song of theirs is Reptile off their album Starfish."

What's your favourite thing about Toronto?

"The people. Everyone is so open, friendly and genuine. Having said that, I do live in Los Angeles. But I come here and the taxi drivers are nice, people smile at you even if you just bought a coffee off them. That's reflecting the music scene here, which is fantastic. Oh, and the cigarettes are nice here too."