Kanye West's highly-anticipated after-party at Circa for last night's Molson Amphitheatre show was the anticlimax of the week.

We had been told by the club promoters that Kanye West, Rihanna, Lupe Fiasco as well as Pharrell Williams, Chad Hugo and Shay Haley of N.E.R.D., and everyone else from their crew will be hanging out there "for a little R&R" after the show.

"If you feel like joining the party, we'd love to have you as our guest," the invite enticed.

I was among a civilized scrum of photographers and videographers awaiting a photo op just inside the entranceway of Circa. We waited and waited, some of us for over two hours for the celebs to show and pose for us in the stripey tunnel, which would have made for some cool shots.

But this turned out to be a false alarm.

We were finally whisked away to where they were to enter through a back door. CITY-TV, CTV, ET Canada, Toronto Sun and a host of others joined me for this chance to catch a glimpse of the hip, pop prima donnas.

When the door finally swung open and one of the celebs came in, some six-foot-six, bald and burly bouncer stuck his fat finger in everyone's face and yelled at us not to take any pictures, as if we were a bunch of unwelcome paparazzi or rabid teenage fanboys. 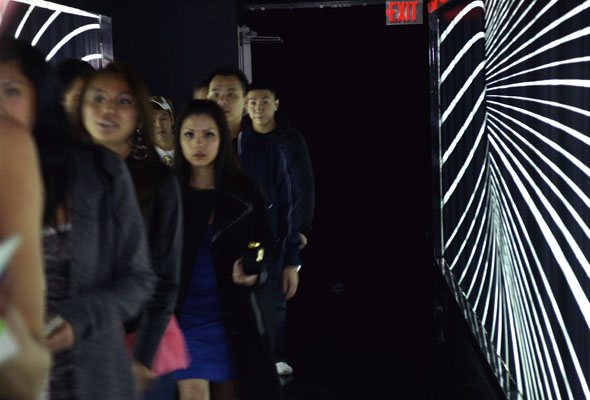 Getting threatened by security after being invited specifically to take photos was certainly not cool. It's one thing if a celebrity changes his mind. Getting threatened (by the meathead bouncer) for doing our job is totally unprofessional and uncalled for.

Watching and waiting for the stars to arrive, wearing an "AFTER GLOW" VIP laminate and huddled amongst a coterie of other media, many club-goers were strangely oblivious to our presence.

You'd think that, knowing these celebs were about to join the party, there'd be more of a reception from the concert-going crowd. But maybe that was just it. These clubbers weren't here for the chance to catch a glimpse of an already ego-overloaded star, but to party it up on their own. 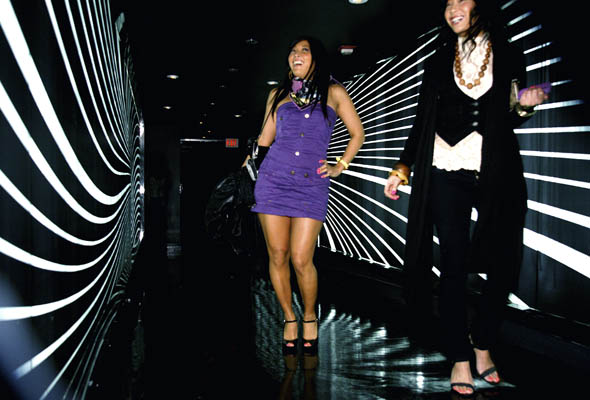 Some stopped to get their 15 seconds of fame, pretending to be the celebrities themselves. This helped break the monotony of the wait. But without the payoff at the end of a long wait at the end of the long tunnel, it was time to call it a night.

I pity the event promoters, who seem to have been given misinformation by the celeb handlers, who obviously have little regard for how the media machine works. If the club wants to hold their status as one of the top clubs in North America, pulling this kind of stunt will quickly do them in.

If Circa is going to spend thousands upon thousands of dollars decorating and redecorating their club every three months, they could at least spend a few hundreds properly training their security staff on client and media relations.