Save Your Local Music Retailer: Record Store Day in Toronto

With its burgeoning independent music scene, it made sense that Toronto took part in the annual Record Store Day which was celebrated across North America last Saturday. The eight-hour long event showcased a diverse array of local artists ranging from blues rock to straight-up country.

Held at Sunrise Records' 336 Yonge St. branch, Toronto's Record Store Day consisted of unplugged performances from Illscarlett, Neverending White Lights, The Sunparlour Players, Machete Avenue, Laura Barrett, The Joys, The Rizdales, Derek Miller and The Creepshow. There were a number of kids who camped out in the store from lunch just so that they could get a good glimpse of Illscarlett come dinnertime. Talk about dedication. 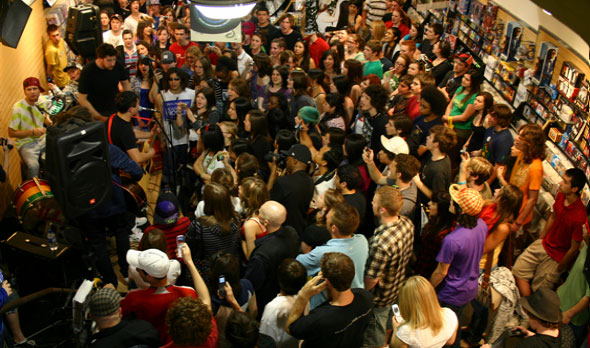 Come to think of it, didn't we all cut class at one point in our lives just so that we could be first in line for the latest CD (or cassette), or wake up at an unearthly hour for an in-store signing? Bragging that you were the first to buy that MP3 off iTunes doesn't quite cut it.

When was the last time you went inside a record store and actually bought something? With the death of the legendary Sam the Record Man last year plus countless other independent music stores (not to mention major retailers such as Music World and Tower Records), is the fate of these aural institutions truly dismal? Are record stores still relevant in today's technology-driven society?

Daniel Victor, Neverending White Lights: My dad used to take me every week to buy an album, then a cassette, then a CD. I just always thought that it's important to actually own an artist's body of work and I think that art form has lost its importance among today's culture.

Sarah Smith, The Joys: I'm too lazy to download. I like to going to record stores because it's so colorful and you can actually see the art on the cover... because sometimes it's not only the music that the artist wants to showcase. Reading who influences the artists on the sleeve reminds me so much of my childhood that's why I don't think I'll ever stop buying CDs.

Sean McNab, The Creepshow: My old band, we went to a record store on the day of our album release and took pictures. It was pretty exciting.

Laura Barrett: I live near the Annex and I still support my neighborhood record stores particularly Soundscapes, they carry a big local selection. Most of the people working in record stores are musicians as well, they know what's going on... and when you walk into a store and something's playing and you like it, you're more likely to buy it.

Alex Norman, Illscarlett: I'm a big fan of my record collection, it's just nice to look at and alphabetize... when you buy a physical record you listen to it as a whole as opposed to downloading, I usually just buy a single off iTunes. The problem with buying singles though is you lose the art of the album, the artwork and how the songs flow... like The Mars Volta's De-Loused in the Comatorium is a great example of that. 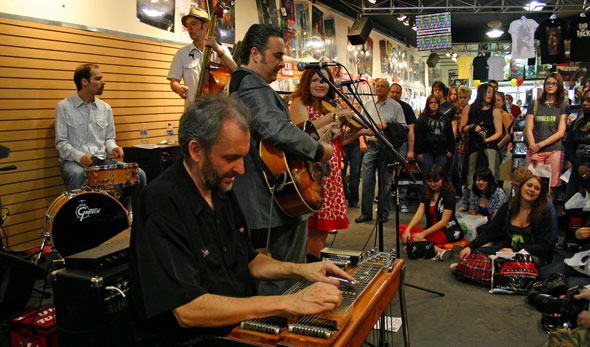