We all like to think we have better musical taste than our cohorts; it's an essential element of the human condition. Now, thanks to a new website, you can actually get charts and graphs to justify your position.

Songkick.com is a London-based site dedicated to helping you find a good concert to see in your area. They do so by monitoring Amazon sales, blogosphere activity, and various MySpace statistics (song plays, profile views and number of friends) from the last five weeks and applying an undisclosed algorithm to come up with a proprietary ranking for every band in their database.

The coolest thing about the site is their Battle of the Bands page, which allows you to put in any three bands and compare their stats. So I thought it would be fun to put together a TO-centric battle royale to see who would come out on top.

In the gold corner, currently touring their soon to be released album Elephant Shell - Tokyo Police Club! In the blue corner, kicking major butt at the Radiohead Remix Contest, the electronic combo with the name you cannot tame - Holy Fuck! And, in the red corner, this town's sonic equivalent to the beloved Leafs (they're way past their prime, but still filling arenas for some inexplicable reason) - Rush! ...and Fight!

Looking at the Amazon stats, we'll see that Rush are sticking to their tried-and-true slow-and-steady approach, while Holy Fuck peak early and then drop-off, but what's this, coming up on the outside? TPC make their album available for download and their sales come out on top. 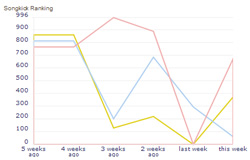 In the Blog Posts round, we see nobody's talking about Rush whatsoever. TPC had a fair bit of hype going on a few weeks ago, perhaps fuelled by their keyboardist's bathroom blog, but all the sensation over their Radiohead remix last week is giving bonus points to Holy Fuck.

In the MySpace stats, Rush proves that being a household name has its advantages; no one can beat them in profile views, even though TPC seems to have the most listens and friends.

When it's all put together and run through the Songkick number crunching thingamabob, it looks like Rush comes out on top more often than not, which means that I was right about everything in high school and everything since then has been a lie. Wait a minute, that can't be right! I don't even like Rush! I demand a recount!