This was the 14th installment of HHK in the T-dot that's been growing in popularity in as faraway places such as Reykjavik, London, Miami, Montreal and Sudbury as well as in New York City, where it all began in 2004.

Banish your previous notions of karaoke with its cheesy big screen, tele-prompter fed lyrics with bouncing ball, these MCs come prepared. Mostly memorizing raps from their childhood, some bring a single lyric sheet with them up on stage where they get props from an accompanying DJ and an enthusiastic audience as they tear through oldskool songs.

The monthly Toronto gathering is organized by four DJs: DJ Ted Dancin', DJ Numeric, DJ Dalia and More or Les. Crowds and performers alike are as varied in as Vanilla Ice and Ice-T. Both guys and gals get in on the show, throwing down rhymes with some talented local hip-hoppers such as Saukrates and Sean Ward.

More on the next HHK and photos from the anniversary night in a mini slideshow after the jump.... 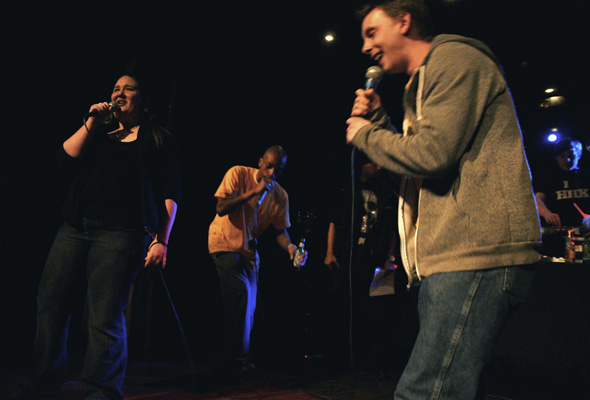 Some of the popular rap and hip-hop artists performed during an HHK show include LL Cool J, Notorious B.I.G. and Method Man. One of the highlights for me at Thursday night's party came when Masta Ace hit the stage with Run DMC's My Adidas.

Maybe next time I'll get the guts to go up on stage myself. If they let me do Word Up or Superfreak.

Think you've got what it takes to impress the locals? Bone up on your lyrics and be prepared to hit the stage at their next HHK night on Saturday, May 17 at The Gladstone Hotel Ballroom (1214 Queen St. W.). Doors at 9 p.m. $6 cover.