Review contributed by Paul Lancaric. All photos by Tanja-Tiziana.

On a recent road trip spanning Toronto to California, I was introduced by friends to Great Northern's music. We listened to their infectious album for most of the trip, driving through the Midwest, the Rockies, and along the coast of California. The music became the soundtrack for an amazing trip - so imagine my excitement when I found out they were playing a show right here in one of my favourite Toronto concert venues, the Mod Club.

Opening for the Gutter Twins, I couldn't get enough of Great Northern's performance, and unfortunately the Mod Club really didn't offer enough. The club did a poor job of hosting a superb opening act for this show.

I made a phone call to the venue before heading over to source out what time Great Northern would begin their set -- an unsure "7.30PM?" was the answer I got.

The Mod Club kept a line-up stalled outside until roughly 7:25PM (despite a 'Doors at 7PM' policy). Having arrived at 7:15, we were only about 20 people deep in the line, yet still missed most of what I hope was only Great Northern's first song. 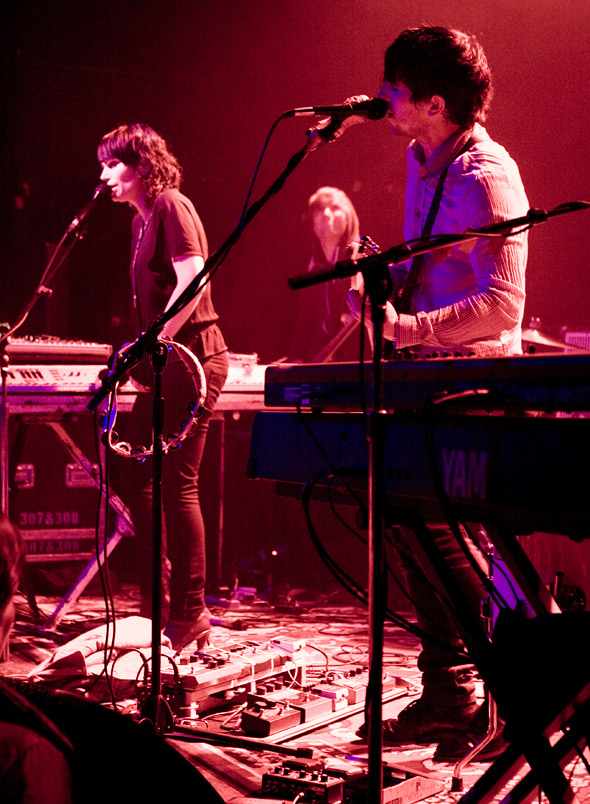 That disappointment aside, Rachel Stolte (vocalist/keyboard) and Solon Bixler (vocalist/guitar) washed those feelings away the moment we walked into the main room. Their surreal blanket of atmospheric keyboard and guitar (coupled with some loop samples) provides the perfect bed of sound for their serene vocal harmonies to soar over.

Davey Latter (drums) keeps each piece moving at the perfect pace - which I can imagine is difficult sometimes considering the sad and beautifully hesitant rhythm of the band's slower songs.

About half an hour later, once everyone was finally in the crowded club, the set was pretty much over. Great Northern packed up their things (which they had to push through the now full house - was the stage door out of commission?), and quietly left the stage.

I hope one day to catch these guys on a night that's just for them, at a venue which seems to care about their music. For now, their two releases 'Trading Twilight for Daylight' and 'Sleepy Eepee' are staying at the top of my playlist.