Three things lured me out of the house last night: two hyped female-fronted bands I hadn't seen live yet, and one of our city's newest rock venues I hadn't yet visited. So I left my house at 10pm, headed for Tattoo Rock Parlour to check out Lioness and Pony Da Look.

Tattoo looks nothing like the Crystal Room or Left Bank (the previous clubs in that space). It has been made to be a much cozier - well - parlour, and it is very carefully styled to look very "rock". There's a big dining room in the middle of the floor in front of the stage - presumably there only during smaller, mid-week shows.

Lioness was on first. Riding an ever-growing wave of hype since forming last year in the wake of two defunct Toronto bands (No Dynamics and controller.controller), they have been playing sweaty underground parties as well as high profile industry showcases. Fronted by large-lunged singer/keyboardist Vanessa Fischer - whose voice could have stripped the expensive wallpaper off Tattoo had her mic been any louder - channels equal parts Karen O (Yeah Yeah Yeahs), Grace Slick (Jefferson Airplane), and Nina Simone. With distorted bass and disco drums backing her up, Lioness sound like a female version of Death From Above 1979. That's a good thing. 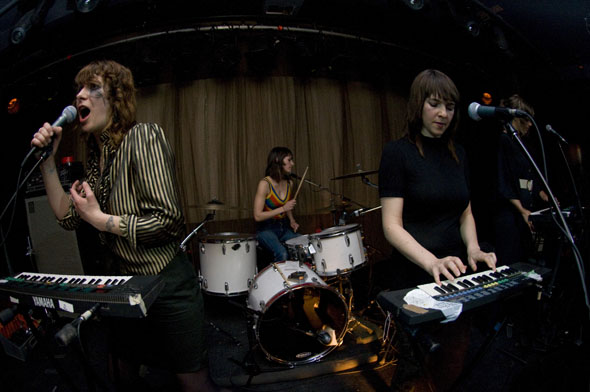 All-female new wavers Pony Da Look headlined the night. Without having heard a single note from this foursome (with a new release coming this spring on Sloan's Murderecords), their more-sour-than-sweet retro attack really took me by surprise. The band's sound comes from three keyboards, a live drummer, and one very theatrical lead singer (Amy Bowles). Armed with anger and face paint, Amy snarled more than she sang. Not my thing, but the crowd loved it.

I'm already looking forward to my next encounter with Lioness. Something tells me they will really light it up on bigger stages in the near future.