Paper Bag Records hosted their CMW showcase at the Drake Underground last night. It should have been called The Woodhands Show. And what a show it was.

After decent sets by Huckleberry Friends and Tropics, kalimba song bird Laura Barrett took a seat on stage and treated the crowd to a unique set. The kalimba is a fun instrument but Laura plays it so well, I wish it was included in every orchestra.

Experimental rockabilly guitarist Slim Twig was next. I liked most of his band's set, which featured both live and pre-programmed drums, farfisa organ and cello.

I was really impressed with Montreal dance pop band Winter Gloves, whose set was filled with great beats and melodies. They're working on a new record here in town and I'm looking forward to that after seeing them live.

The best set I've seen all week was by last night's headliners. Woodhands destroyed the adoring Drake crowd that rushed the stage as soon as they started playing. I've seen them a bunch of times before, but Paul and Dan have perfected their drums/synthesizer/keytar/singing/screaming formula. Every song had the crowd bouncing and the duo communicates so well on stage, extending outros and jamming on the fly. 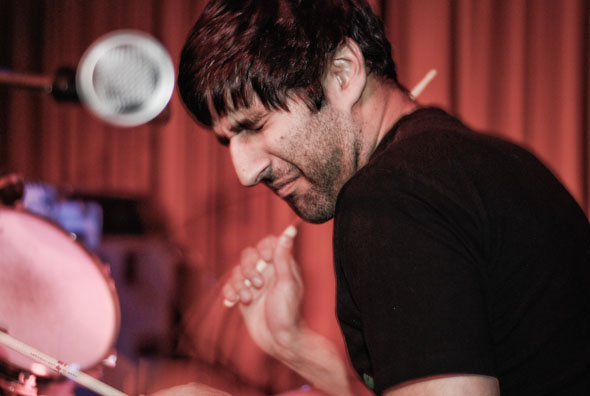 Something crazy happened when Paul rapped a Puff Daddy verse leading into a raucous version of their song "Under Attack". The energy in the room went from around 80 to 110%. The crowd at the front started going insane. It was great to watch.

There were sweaty faces by the time Woodhands finished their set - which was extended by popular demand. They jammed on "Dancer" for over 10 minutes and the crowd was thoroughly disappointed when they finally had to stop playing.

I mentioned it earlier this week, but you'll be hearing a lot about Woodhands in the coming months when Paper Bag releases their debut record, Heart Attack, next month.