Alanis Morissette has had a busy week.

The Ottawa-born singer was inducted into the Canadian Music Industry Hall of Fame and is also the recipient of the Lifetime Achievement Award during the Canadian Radio Music Awards this week.

All in the midst of a five-month Exile in America tour with Matchbox 20, which brought her to Toronto's Air Canada Centre Feb. 22.

"I feel grateful. It's a challenge for me to let myself be recognized for anything, so it's a great opportunity to just stand there and take it," said Morissette during a press conference / Q&A yesterday afternoon.

Keep reading for more on the past and future of Alanis.... 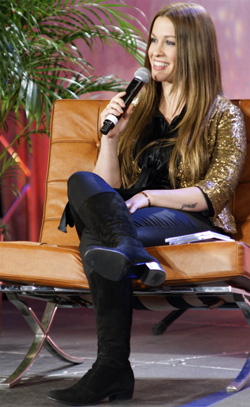 Although few people remember her 1991 album that started it all. Who can forget the Too Hot video?

Seventeen years sure is a lifetime. At least in the Canadian music biz. To bestow a Lifetime Achievement Award on someone at such a stage in her career may be questionable to some.

"I see it an an amazing encouragement to continue on my path," said Morissette. "I really do think I'm going to live to 103 or so."

What is there left to do after a lifetime of achievement?

For Morissette, it starts with the release a new album Flavors of Entanglement this spring.

"This record I just finished I worked with Guy Sigsworth, who has worked with Imogen Heap and Bjork. So he's more technologically inclined. There's a nice fusion of my sensibility and his."