In the DJ Booth With the Degrassi Girls

Spike and Caitlin from the TV series Degrassi Junior High are now guest deejays at a monthly '80s dance night called In Between Days.

Last Friday, I braved the elements and hit up The Annex Wreckroom and was rewarded with a really fun '80s dance party with guest DJs Spike (DJ Demanda) and Caitlin (DJ Mistycious).

The two TV actresses -- Spike is actually Amanda Stepto and Caitlin is Stacie Mistysyn -- take turns doing 30 minute sets and posing for photos with their fans. The duo have been friends since the Degrassi days.

Spike no longer has the spiked hair, but shows her punk cred with several colourful tattoos. And Caitlin is, well, as pretty as she was as a teenager in the late '80s.

By the end of the night, the Degrassi girls are partying it up on the dance floor too.

As episodes of The Muppet Show flash on the giant screen behind the dance floor, I ask "Caitlin" if she prefers dancing or deejaying and she says she likes both.

"When I'm playing a song I really like, I want to dance. So I end up dancing in the DJ booth."

Besides this DJ gig the first Friday of every month, Stepto and Mistysyn are working on their own TV show called OverXposed.

More of life after Degrassi, including photos from their DJ night after the jump.... 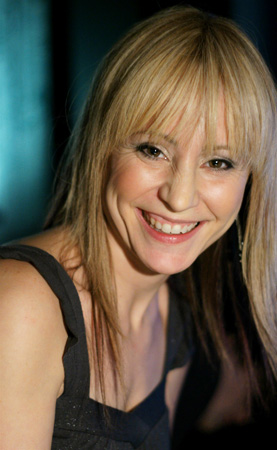 "It's a bittersweet comedy co-created by Amanda, me and our writer partner Denise Blinn, featuring Amanda and I," explains Mistysyn.

How did the idea for this new TV show come about?

"We were having a drink one day last year and started coming up with all these anecdotes about the biz, relationships, etcetera," says Mistysyn. "Mostly embarassing situations we've been in.

"And we were cracking each other up so badly that we decided right then and there we needed to write it down so people can laugh at us and hopefully with us."

Can't wait until then to get your '80s fix? There's a few other '80s nights starting up and and ongoing that will entertain you in the meantime.

Failing that, there's always Degrassi old school episodes you can now get on DVD.

If you're of The Next Generation, perhaps you'd get a kick out of seeing where the series started to take off.

More photos in a mini photo slideshow below: