Everyone's On Board for a Rollin' & Scratchin' Party

Although the blizzard that had Toronto in its slushy grasp undoubtedly prevented many a party-goer from reaching their intended destination, I determinedly headed back to one of my favorite spots in the city for a chance to check out the premiere of Three Man Dance Party as they opened for Candy Coated Killahz at The Boat as part of the monthly show put on there by Rollin' & Scratchin'.

I had no idea what to expect. Jeffrey's (half of TMPD) house parties always had great tunes (and they'd put out a fantastic mixtape last summer that I still listen to) but even listening to some of the new tracks on their website didn't properly prepare me for the spectacle that was about to ensue.

Everyone knows how it is when you go out and hear some DJ spin a set. Maybe you like some of the songs, maybe you don't, but there's usually some kind of recognition at play. I know this may sound rather elementary to anyone who knows better but I think it's easy for the average person to dismiss music when they think it's going to be crap or it's something they've heard before. Hearing a new sound is not always the cat's meow but when it's good, it makes your night.

TMDP were focused, playing a short-but-sweet instrumental set of their own stuff to a crowd that got into it as it quickly became apparent that these guys knew what they were doing.

Their tunes run deep, incorporating a variety of synths layered over MIDI tracks that they cut up on the fly. When I was right in the thick of it, I was being led from both sides in a way that I couldn't help but dance to. The sound zoomed back and forth but not predictably and as they led us through their set, I found myself exchanging delighted glances with people I didn't know who were into it just as much as I was.

You can watch a clip of their set below:

Jeffrey Addison of TMDP loved the reaction: "It was intense; I fed off them like those little fishes whales eat. When they were digging it I just rode the hook like crazy, and when they were staring off into space I let the set ride. It was nuts... our first show and people were screaming and head banging."

Before I could get used to just how awesome the night was, Candy Coated Killahz came on next and took it in a different direction. Sporting an old-school sound that's equal-parts paired-down 90's beats and soulful (yet feisty when they need to be) vocals, they were quick to capitalize on the emotional hype that TMDP had accrued with a set of old songs and some new one off of their upcoming EP, a personal highlight being their mash-up of "I Like To Move It" and "Boom Boom Boom" with their own words. They sound a lot grittier in person; kind of like how Kids On TV do at their shows.

At one point, I found myself slow-dancing on stage with Lauren, their stage manager and backup singer, in an approximation of that night at a grade school gym I never had, and then it was back onto the floor to kick it up a notch.

Tosha Dash, of CCK: "I was really happy with the show cuz The Boat is the kind of intimate venue that just makes it easy to be yourself on stage, and dance like a monster."

Even though I was with friends, I kept on meeting some of the most friendly, unpretentious people I've ever had the pleasure of running into at a club. There was no attitude; mostly everyone there seemed to be into getting sweaty and having a good time.

According to Craig Hill, one of the guys behind the event, "We don't want to limit the night to one type of music or one type of scene. By having a lot of diversity in music over the course of the night, it kind of forces people to let their guard down and just have fun for what it is; a good time. We try to have something for everyone and encourage people to leave their hang ups at the door."

He was up next with his partner in crime in Rollin' & Scratchin' and while there set was perhaps more standard, it was no less fun. They played all kinds of good stuff and never got too predictable. As a capstone for the night, they were fantastic and made sure the good vibe established by the previous performers didn't go to waste. Being one of the last people on the dance floor with my 2 am shuffle, it was great to see a wind-down done properly. People were still giving each other thumbs-ups and nobody looked like their dog had just died.

So, if you didn't come out because of the weather, rest-assured it ain't that bad. If you didn't know anything about an R&S party, consider yourself educated. And if you, like me, want more, I'll see you next month. 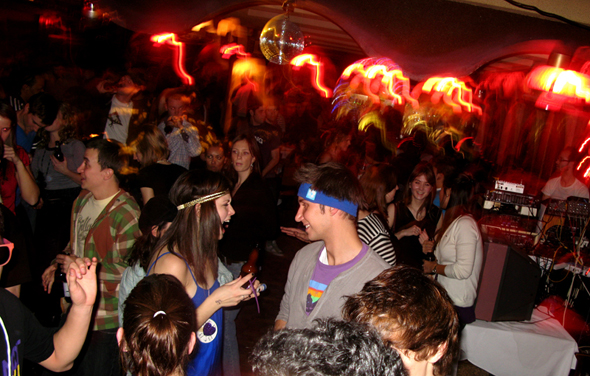