Saturday morning - 10 AM to be precise. Most musicians seem genuinely surprised to discover there's a ten o'clock in the morning as well, but Canadian indie-rock icon Ron Hawkins has chosen this moment to invite me into his Kensington loft so I can pick up a copy of his soon-to-be-released album, Chemical Sounds.

When Ron invites me in, I have to step over a miniature plastic tea service. It belongs to his young daughter, Ruby B., to whom the new album is dedicated. Luckily enough, I meet her during my brief stay. Pint-sized and adorable, it's obvious who takes centre stage in this ensemble. As only a child truly can be, she's vibrance personafied, and I soon realize why this musician's household is up so early; ain't nobody sleeping late here anymore.

The New Record
Over the next few days, I spend as much time as possible with the record, from the tightly arranged power-pop anthems to the gentler, more reflective moments. I want to be able to give a well-informed critical opinion of the record should anyone ask, but after a few listens I realize I've turned off the critical side of my brain in favour of the sing-along side. Oh well, I tried.

As I listen, I reflect that Ron's relaxed baritone voice is getting even smoother as he gets older, and I embarrass myself that I can't come up with a more original metaphor for this than "aging like a fine wine." I wonder if they make a Thesaurus for hackneyed clichĂŠs and put the record on once more. 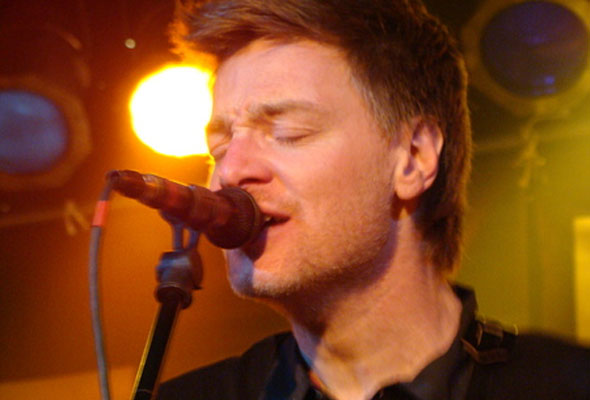 The Phone Call
Come Tuesday, I get the opportunity and ask Ron all my burning questions. I get the impression that this record has been a long time coming, so I ask about this. Ron tells me that he started working on this record right after Lowest of the Low released their last album, Sordid Fiction, in 2004. Originally, Ron and the rest of the band were under the impression that he was working on the next LOTL LP. He reflects, "Being the only guy in the band that didn't have a day job, I was hanging around and spending a lot of time in the jam space. I started demoing everything...from the bottom up. Just playing all the instruments and everything kind of got me inspired first off to...possibly produce it myself...and then I had such a vision for the record that I started writing like crazy and I wound up writing the whole record pretty fast."

Before long, he realized that he liked where the demos were going so much that he wanted to do the whole album by himself. Watching the timelines, I ask if how this decision impacted upon the eventual break-up of the Low, who played their last live dates ever a month before the scheduled release of this new album. Ron replies, "The great thing about being in a band is...there is something that's greater than the sum of its parts, but the trade off is that when I bring a song to Lowest of the Low, it's going to sound like a Lowest of the Low song no matter what it is innately. So I just found with this collection of songs that I didn't really want it to go through the Lowest of the Low filter. It seems to be the trade off: the complete Brian Wilson experience where you orchestrate the entire thing yourself, or the band-of-brothers thing. I had done the band-of-brothers thing quite a lot, so this was something that I got really on fire about.... When I broke it to the band that this was the way I was going to make this record, it didn't go over very well... and then I think people sort of got it.... [LOTL guitarist/singer/songwriter] Stephen Stanley's making a solo record that I'm producing.... The two of us as songwriters feel the Lowest of the Low has been a great gift to us, but on some level, as songwriters moving forward, it can be a little bit of a burden in terms of what people expect from us."

I feel obliged to ask if the break-up was amicable for the entire band, to which he replies, "Everybody's great friends. The last two shows we did...were very emotional. I think we really got to go out on a high note."

So, is that really it for the Lowest of the Low, I ask, or can we expect to see a series of the Who-like farewell reunions for years to come? Ron gives a chuckle, and then says, "We already feel sort of like that. We definitely sent some mixed messages over the last three years - we're running out of ways to say we're taking a break but coming back. I'm about as positive as I've been that the door's actually been closed."

Cheese Redefined
If you listen to the record loud enough, you'll hear a funky percussion loop at the beginning of "A Brief History" that is actually Ruby B.'s heartbeat in utero. Ron made a recording of that sound using a mini-disc recorder at an appointment with their midwife, and then slowed it down in the studio to match the tempo of the song. Originally writing the song as a "how to get through life" manual for his unborn daughter, Ron found himself asking, "is this the cheesiest thing ever, or is this really beautiful? It wasn't until I kind of laid it into the track and started to work the track up and everything that I decided that it was really beautiful and I was going to leave it to everybody else to decide whether or not it was cheesy. You're so enthralled to the fact that you've just had a baby, this perfect little being, that I'm sure from the outside world it could be quite obnoxious...it's a very fine line [you have to tread].... You find yourself saying and doing things you never thought yourself capable of."

I ask if fatherhood has changed his artistic processes in any other ways. "From passing this disc around and talking to people in the industry and friends, people keep saying it seems like a very mature record," he says. "I keep thinking, 'What kind of records was I making in the past that this is so specifically focused as a mature record?' She was born basically three days after I finished the record.... I'm sure that all of that informed my way of thinking about the songs and the things I was saying.... I don't necessarily think it's heavier, emotionally, than any of the other ones, but...it tends to be a real focusing thing.... Obviously, a new life coming into the world makes you think about what does it mean and what have you been doing with your life, your own childhood. I think I couldn't help but have a lot of that filter into the record."

Looking Forward
It sounds like Ron is incredibly happy with where he is and where he's going for now, both personally and artistically. He plans to take a new approach to touring this record. "Sometimes it'll be me and cello, sometimes it'll be the band," he says, intending to "suit the project to the venue. The London Music Club holds about fifty people, so I'll go and do that by myself. When we play the Horseshoe it'll be the whole band [Jason Tait, drummer for the Weakerthans, ex-LOTL bassist Dylan Parker and cellist Alex McMaster from A Northern Chorus]. It's flexible. I'm touring Australia in March, and I won't be able to bring a band. It'll just be an acoustic gig." The flexibility of this arrangement seems to suit his just fine though, and hopefully this freedom will help him put together an equally inspired follow-up to Chemical Sounds in the not too distant future.