What's all the noise about this Kid? Hailing from the depths of the windy city, this Chi-town Sister is creating tons of hype for herself and her posse of peeps. I stopped by her Friday night gig at Parkdale's newly opened Wrongbar. It's great to have a viable live music alternative in da hood other than the Caddy which caters to the more alt-country/rockabily crowd.

She finally hit the stage well after midnight ala supa-star diva, and the crowd was more than ready to show some love. In true DIY nepotism style, her brother Flosstradamus J2K owned the decks 20 minutes prior to the Kid's appearance, banging off some original mashed up beats.

Kid Sister walked the walk and talked the talk, whipping the crowd into a frenzied mass. At one point someone attempted to crowd surf, perhaps confused that this was an MC performance. Her short set was pretty much her entire repertoire, including "Control" and the current "Pro Nails" single that Kayne West contributes to. He actually appears in the video as well, which is currently in rotation on MTV in the US. Sis proved she ain't no halla back girl. It was hard to tell who was having more fun, her or her fans. Either way, everyone got what they came out for. 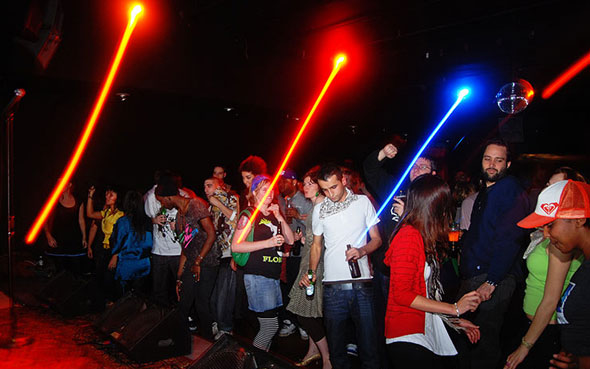 Prior to her show, she was down at Much Music doing an interview and there were also write ups in NOW Magazine and Eye Weekly. Her club rap sound is quite accessible and not filled with derogatory slang, which is likely the reason she is garnering some mainstream attention. It's actually the beats, bass and rhymes that are combined perfectly. Her bro slammed down some vocals with her on several of the songs, adding to the family affair.

She admits to coming from a "family of hustlers". I assume this likely applies to her extended family, her boyfriend DJ A-Trak who works with West, taking it all back full circle. Look for Kid Sister's full length release later this year, and expect several guest performers and collaborations.

As for the venue, an elevated stage was brought in for the night and the large elongated bar and dance floor makes for great sight lines from all over. Wrongbar is owned by Nasty Nav and Chris Harper, two of the hippest dudes in the city at the moment. This was actually their first official night, although they did have a couple of special events late December, including their Dollarama New Year's Eve Party.

The Funktion One sound system was purchased through eBay from a bar that went under in the U.S. I've been here three times now and found the vibe and sounds amazing. As it's on the other side of the Dufferin rail tracks, I'm thinking it will likely appeal to the grittier indie scene rather than the Drake or Footwork crowd. My Prediction: Look for 2008 to be the year Wrongbar becomes the right bar to be at, mashing mainstream with indie.

(More) Photos from Zach at Take More Photos and Carlos Weisz. Get updates on future events like this via A.P.E.'s Facebook Group.