This Is Your Brain On M.I.A.

What can one say really after a show like Saturday night's sold out affair at Kool Haus? Well whatever your take is, you'd definitely have to shout it at this point for me to have even the slightest chance of hearing it, as your voice presently has a constant high pitched ringing to compete with that I'm hoping will go away sometime soon. Regardless, The Carps, Holy Fuck, Datarock, and M.I.A. all banded together to wage musical war on our senses on Saturday... and I have to say quite simply that THEY WON (well actually, I think The Carps might have lost... but we'll get to that later).

As fantastic as the show was though, it didn't escape its own list of shortcomings and oddities that made for some, let's say "mixed emotions" at the end of the night among many. And yes, the constant ringing between my ears is playing a small role in those emotions... 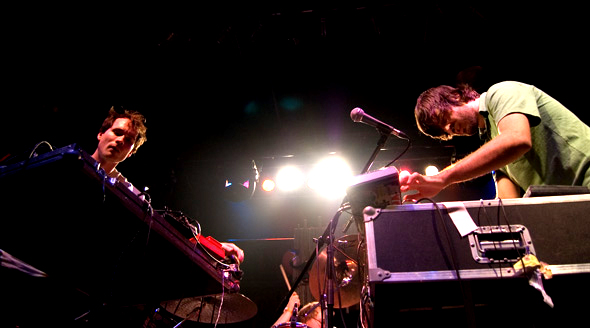 First up, Holy Fuck. I've never been the biggest fan of these guys in the sense that I would never actually buy an album of theirs (yes, I still buy physical albums). I've seen them perform once before though, and they actually put on quite an energetic show. They started off strong, attacking drums, a bass, keyboards, synthesizers, microphones, and a bunch of other noise making devices to make for a thoroughly dancible setlist. It didn't really take long to remember what turned me off the first time I saw them live though... they get quite boring as their set drags on. Nothing against the guys. I have to say that it was nice to have an opener that people were actually dancing to... but I just think it needed something a little more weird and wonderful to seal the deal for me. 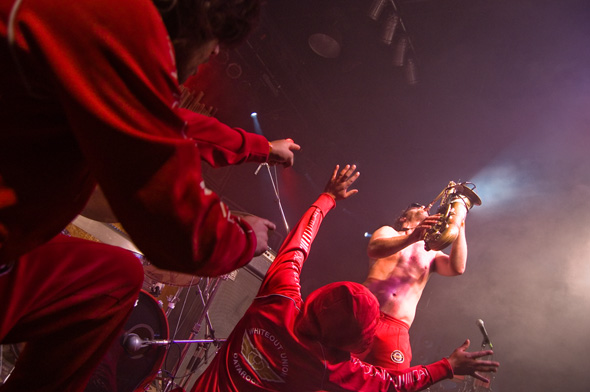 Speaking of weird and wonderful, up next was Datarock. Now these guys kinda did the opposite of what Holy Fuck did. They started off a little weak, sounding a little too dangerously like a matching-red-sweatsuit-clothed Hives coverband... BUT these initial doubts were easily extinguished as their set progressed. Their energy just didn't seem to wear out as the simpler, more standard rock tunes turned into more techno-based arrangements, and the jumping and clapping turned into various quasi-choreographed dance routines... and all capped off with a rather awkward but equally hilarious sing along to Bill Medley and Jennifer Warnes' The Time Of My Life (of Dirty Dancing fame). Weird and wonderful indeed.

Now take the "wonderful" out of that equation and add in a whole lot of awkwardness, and you'll have The Carps short and confusing set on a small side stage by the bar (something I've never seen at Kool Haus). They came on almost instantly after Datarock finished up, and as far as I can tell, they were supposed to be playing on the side stage while M.I.A.'s gear was being setup on the main stage. A rather nice time saving idea had it worked out the way it was intended to. Instead, The Carps played only 3 songs with technical difficulties insuing throughout, until eventually they just stopped and apologetically said "We tried." Even when they were playing though, the crowd around me seemed a bit confused and turned off by the set. Of course, much of this might be attributed to the technical issues... so best not to judge the band based on this review alone.

So after the 3 song set, and some rather violent spinning from a DJ who opted to ditch creativity in favour of shear muddled volume, it was finally time for the main event... 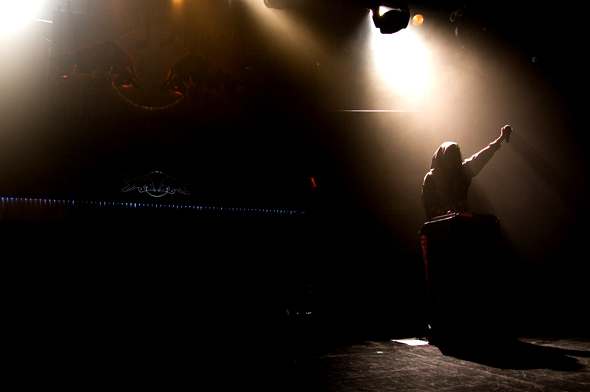 After seeing M.I.A. perform at V-Fest (and completely stealing the entire festival) I had a feeling this was going to be an all out attack of a show, and right from the get go, that's exactly what we got. Starting off in her now customary fashion with Bamboo Banger, the crowd chanted along as she belted out "M.I.A. is comin back wit POWAH! POWAH!" The energy grew progressively more intense and became intoxicating as the crowd swayed every which way in response to smaller pockets of people teaming up to create little dance parties wherever they could. Among those pockets was the one I found myself in throughout the majority of the show. Moving to the music became as much of a sport as it was an art, with limbs flayling in all directions. If you were unfortunate enough to not find the rhythm of a certain track, you were destined to be destroyed by the swinging fists and heads of those who did. So yes, it was an all out attack... in every sense of the word. 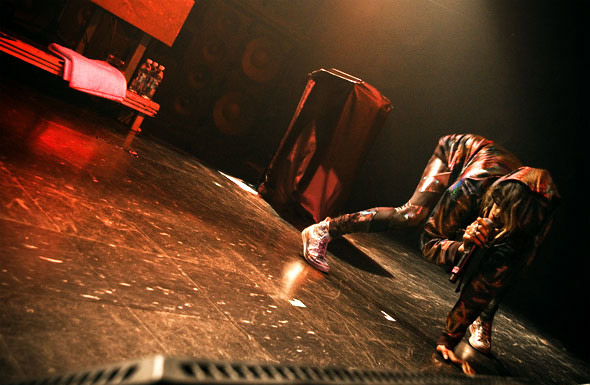 She played most of the favorites, though judging by the appreciative crowd, it seemed as though every song was a favorite really. Not a bad place to be in one's musical career if you ask me. As for my favorites, well I'm a sucker for the older tracks... Bucky Done Gun, Pull Up The People, Sunshowers, and one of my all time favorites, 10 Dollar, all proved to be worth the wait. The new tracks didn't disappoint either. A definite crowd pleaser was Jimmy, with the layers and layers of sound pumping out with such power that I thought my head might pop. Also on that same level of intensity would be Hussel, Boyz (which I'm actually not the biggest fan of, but was great live), and another favorite of mine, $20 (the Pixies chorus just kills me every time).

And of course we can't forget the tribal crowdpleasing track Bird Flu, performed (similarly to V-Fest) with a swarm of agile audience members who climbed their way over the barricade and onto the stage for a chance to go nuts with M.I.A. for a good 3 minutes or so. Granted, they weren't quite as crazy as fans who climbed on stage at V-Fest, but they were great to watch nonetheless.

Unfortunately the same can't be said for a number of audience members who seemed hell-bent on becoming marble statues for the entire show. I found it actually quite insane the number of people who fought their way through the crowd to get close to the stage, only to end up just standing around like they were waiting for a bus. These same people would then become obviously annoyed and even mad at anyone around them who even showed the slightest sign of life by actually MOVING their bodies to beat of the music. This is an M.I.A. concert kids. Movement is a given. If you'd like to practice being a statue, please do so at the back of the crowd. Otherwise, it is very likely you'll get bumped a few times by those of us who actually want to have a good time. Please and thank you.

When all was said and done though, I had a blast and most everyone I asked after the show seemed to reiterate the same sentiment. One small disappointment though was the lack of an encore. I suppose these days we just expect it at concerts. Part of the excitement of going to see a show is the thrill of guessing what the artist could possibly be saving up for the encore... well at least for me it is. Either way, today I'm thinking it must have been for the best though. Judging by the state of my ear drums right now, had she actually come back with another song, I'm assuming my brain would have just exploded all over the place anyway... and I'm guessing that would have REALLY pissed off the statues in crowd.